Mayor of Kingstown, you're no Yellowstone. The third episode of the crime/prison drama from showrunner Taylor Sheridan (Yellowstone, Wind River, Hell or High Water) offers drama, but very little payoff, setting up what is likely to be a major conflict for the rest of the season. After a meth lab explosion, everyone — the cops, the gangs — is out for blood for Kenny, the unlucky dealer and meth cook, who caused it which resulted in the death of a child. And stuck in the middle with everyone expecting him to grease the wheels, is Mike McLusky (Jeremy Renner).

What you get is a sort of rumination of just how broken our "justice" system is, with cops planning to shoot Kenny on sight, followed by a backup plan to have him quickly murdered going into prison. With the youngest McLusky brother Kyle (Taylor Handley) leading the police contingent, it also opens up some family drama, as it becomes clear the entire city depends on the two brothers to broker some sort of deal. The emphasis here is on "rumination" as the episode just doesn't really go anywhere but sort of meanders around Renner's brooding, followed by Handley's brooding.

The one bright spot of the show continues to be Crip gang leader Bunny (Tobi Bamtefa), who it appears is going to become quite the power broker in future episodes based on the previews for next week. He's simultaneously funny, menacing, humane, and dangerous. Three episodes in and he still feels like wasted potential, though. In a show that very much wishes it were like The Wire, he is the only character who feels like he is complex enough to be from The Wire.

Most of the episode, and really the entire series so far, is suffering from a "When are they going to get to the fireworks factory?" conundrum. This series wrote a pretty big check, and aside from the shocking death of a major character in the first episode, really hasn't been able to clear that check… yet. Hope remains, understanding that likely Sheridan and co. understand that streaming series can have a slower burn. However, watching week to week, you wish there was more payoff than a few classic rock needle drops from Rod Stewart and The Doors and some graphic displays of violence. The show feels like it was meant to indulge the id of reactionary, angry aging boomers who really love violence. And yet? Its political undercurrent is basically making an ACAB case to defund the police? It's a weird mixed bag.

Compared with its spiritual sister show, Yellowstone, it leaves you wondering which part of the secret sauce is missing from Mayor of Kingstown. Both run on high-intensity macho vibes, but even when Yellowstone does a filler episode, it still has some interesting things to throw in.  Mayor of Kingstown is missing some of Sheridan's trademark charm. Mayor of Kingstown's characters, with a few exceptions, feel less multi-dimensional. However, if the ratings from its premiere episodes last week on Paramount + are any indication, the show isn't going anywhere. We can hope for future episodes to start pointing towards some more cogent theme or character development other than Jeremy Renner growling at people, but it can certainly fit in as a methadone fix while you're jonesing for Yellowstone/1883, Star Trek: Discovery, or Hawkeye. 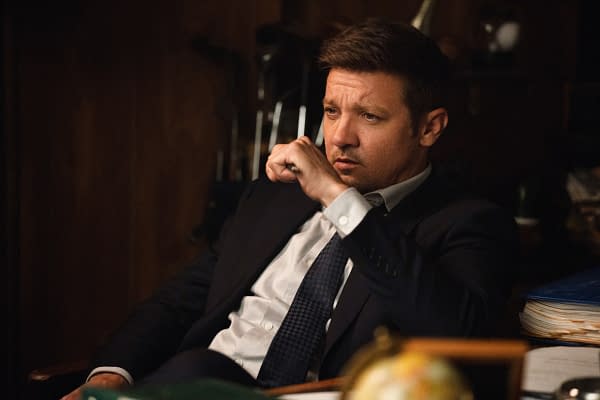 Review by Andy Wilson
6/10
While many streaming series can benefit from a slow burn, Paramount+'s Mayor of Kingstown needs to pick up its pace and settle on some cogent themes other than "the world is terrible" and "watch Jeremy Renner brood about it."

Constantine "On Solid Ground and Moving Along" at HBO Max: Report

According to a report from Deadline Hollywood, J.J. Abrams' Constantine series is said to be "on solid ground and moving along" at HBO Max.