America Chavez has been astonished by her otherworldly origins, her overwhelming power, her brusque manner, and her striking style. What if, however, everything you knew was a lie? Would that not be an enormous loss for the iconic new character, swiping at her feet of clay and bringing her down to a more mundane origin? This issue posits those questions in some of the most disappointing possible ways.

The mysterious attacker from the previous issue is revealed as someone with a deep connection to the title character, and in doing so, adds a sadly mundane direction to everything you know about this character. Kalinda Vazquez's script ably presents this new idea, whether or not it's true, but it honestly gives very little agency to America. Watching her as a reactive element to the events here is both saddening and frustrating, especially given the catalyst character introduced here. Likewise, to take the dimension-spanning scope of the character and whittle it down to such an ordinary, humdrum level is like making Charlie Kaufman the next Captain America.

Admittedly the visuals from Carlos Gomez, Jesus Aburtov, and Travis Lanham are very, very attractive, showing the angles and lighting effects and action with a high level of craft. The issue with this issue doesn't start at the execution stage but vexes at the level of conception.

This is an interesting origin for a character who is grounded in real-life elements and action … but it ain't America. RATING: MEH.

America Chavez: Made In The USA #3
By Kalinda Vazquez, Carlos Gomez
WHERE'D YOU GO, AMERICA? The face of America's mysterious tormentor is revealed – and while whom America sees is shocking, to say the least, it's what they say that will shake the foundations of everything she knows. And then? It's just a matter of whether or not to believe them. 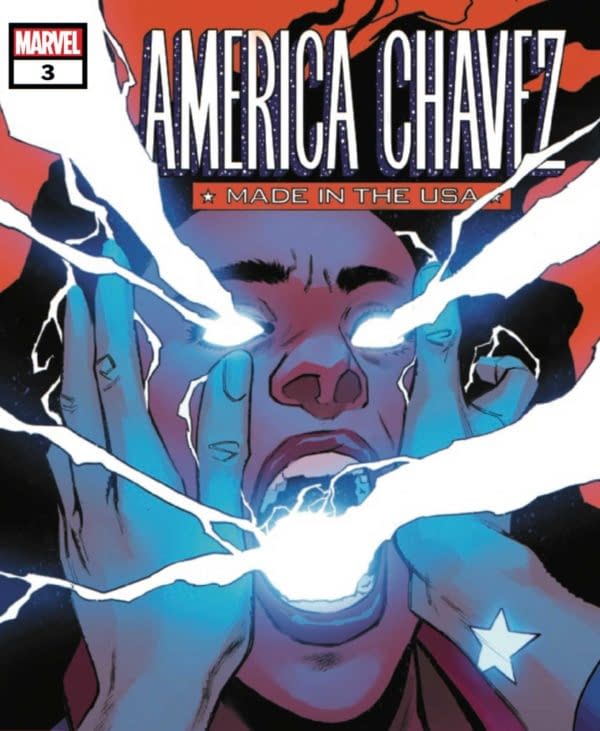 Review by Hannibal Tabu
6.5/10
Aw, but ain’t that America? Actually, it’s not as a retcon threatens to derail the interdimensional heroine.
Credits
K
K
J
J
A
A
J
J
M
M