There's no shortage of liberal Captain America stories, and Captain America: Symbol Of Truth #1, an oversized first issue, looks to be another entry in that tradition.

Nebula-nominated writer Tochi Onyebuchi made an impressive bibliography in prose fiction, and in Captain America: Symbol Of Truth #1, he doesn't skip a beat. Marvel wisely pairs him with artist RB Silva so that one of Marvel's Stormbreakers can smooth over any engineering issues in the script.

The splash panel on page six, where Sam Wilson is blown backward by an explosion and gunfire, which you can see below, is particularly striking. There's a cheeky word balloon in the panel that I have to imagine letterer Joe Caramagna chuckled at as he worked. RB Silva and colorist Jesus Aburtov do an especially good job with motion in the issue, as Captain America and the Falcon track a moving train allegedly carrying Super-Soldier serum while flying.

It's too soon to say anything meaningful about the series yet, but Captain America: Symbol Of Truth #1 is a strong start, and Onyebuchi's voice (aided by Caramagna) is distinctive. Here, we host a preview here that Rich Johnston dressed up as a potted plant to procure. (Spoilers: He didn't, but Jude needed to make word count.)

See you for issue two?

Sam Wilson picks up the shield once more — and enters a world of trouble! Following a lead from Misty Knight, Sam intercepts a mysterious group hijacking what appears to be an empty train. As he digs deeper, he discovers that the plot may be connected to a crucial piece of Captain America history…and, surprisingly, Wakanda. The world is ready for two Captain Americas — but is Sam Wilson ready for what comes next?
Acclaimed writer Tochi Onyebuchi (BLACK PANTHER LEGENDS, Riot Baby) teams with Stormbreaker R.B. Silva (POWERS OF X, INFERNO, FANTASTIC FOUR) to open a thrilling new chapter of CAPTAIN AMERICA history! 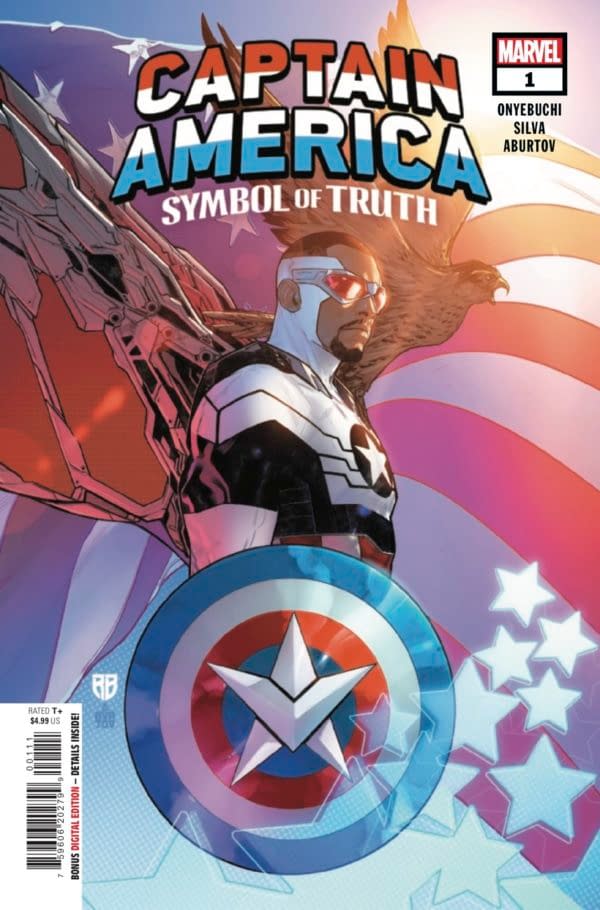 Review by James Hepplewhite
6.5/10
It’s too soon to say anything meaningful about the series yet, but Captain America: Symbol Of Truth #1 is a strong start and Onyebuchi’s voice (aided by Caramagna) is distinctive.
Credits
Writer
Tochi Onyebuchi
Artist
RB Silva
Colorist
Jesus Aburtov
Letterer
Joe Caramagna