It looks like there are some limitations on the comics DC is planning to offer as part of its DC Universe all-you-can-read subscription service. The company posted a FAQ about their service on the DC Universe message boards, as noticed on Twitter by Graeme "Graham" McMillan. According to the FAQ, DC will not be including Vertigo, Milestone, Black Label, or other DC imprints, as a general rule. In addition, though not included in the fact, a DC Universe official answered a follow-up question to point out that, in order to remain "good partners to our retailers," not only would new comics be delayed by 12 months, but "items like Killing Joke and others that are still valuable for collectors and retailers alike" would be excluded.

Check out the relevant portion of the FAQ below:

🌟 Will the expansion be all at once? What's the date and/or schedule?

We are rolling titles out in a few large batches, roughly ever week. You can expect to see everything we intend to carry on the service by the end of April. There are some exceptions you will not see in our Ultimate DC Comics Digital Library, which you can read all about below.

🌟 Will you have Vertigo, Milestone, Black Label, and other imprints?

While we are huge fans of the various imprints acros s DC, we are currently not going to be featuring Vertigo titles, and most other DC imprints. You may see some representation around the edges where exceptions are made, but these will be few and far between.

🌟 How about Elseworlds, or crossovers like Batman/Predator or Superman/Aliens? Or movie tie-in comics?

Generally, yes. But there are some exceptions if found under specific imprints or other rights holders. Please explore the rest of the FAQ to gain a better understanding of what might inform our library shelves.

🌟 Will you have graphic novels and other collected publications? Or just single issues? Or both?

🌟 Does this mean no more rotation?

Yes, we are no longer rotating comics! While we may remove certain titles on occasion, we have no intention of continuing the rotating comic program. When possible, we will give you advance notice when a title is going to be removed from the service.

🌟 Are "new" comics added on a weekly or monthly basis?

We will be adding more comics every week from titles published 12 months ago, as well as newly digitized/archived titles. 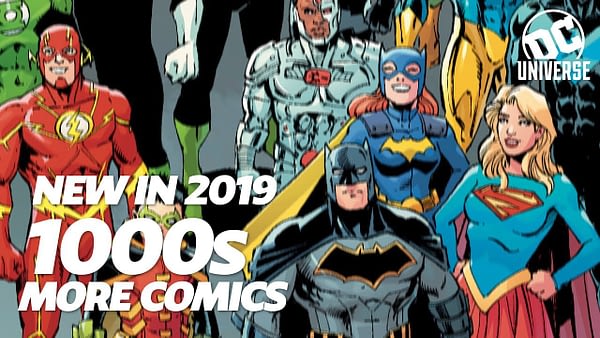 In a WrestleMania "Meat-Up" hosted by Peacock and Murray's Cheese, Bianca Belair proved she really is the EST of WWE, defeating Drew McIntyre in a cheese board making contest.

Kenny Omega will team with the Good Brothers to take on Rich Swann, Willie Mack, and Eddie Edwards on tonight's episode of Impact Wrestling.

Mike Tyson will return to AEW Dynamite next week for the first post-Wednesday Night Ratings War episode. Plus: two title matches and more.

Blood and Guts Match Set for May 5th, Inner Circle vs. Pinnacle

Chris Jericho and the Inner Circle challenged MJF and The Pinnacle to a Blood and Guts match for May, ensuring another deadly pandemic will strike the world before then.

In the final battle of the Wednesday Night Ratings Wars, AEW Dynamite pulled out all the stops, including Mike Tyson. But did they Stand and Deliver?

Kendare Blake, author of the Three Dark Crowns novel trilogy, the Anna Dressed in Blood duo, and the Goddess War trilogy is to write a new YA series in

Attack on Titan: Thoughts on the Final Manga Chapter Out Today

An Unexpected Way To Pirate Comic Books On Amazon Kindle?

Okay, this is a twist on the old pirating comic book story courtesy of Amazon. Someone, using the name Raymond Coles, appears to have uploaded a whole

Marvel's Star Wars event, War Of The Bounty Hunters focuses on what happens to Han Solo's frozen body between Empire Strikes Back and Jabba The Hutt's

Pirate Queen Anne Bonny Returns in A Man Among Ye #5, in July

Every time I run a story about the Stephanie Phillips pirate queen comic A Man Among Ye about Anne Bonny, I get lots of DMs from people who have come