Doomsday Clock is an unauthorised sequel to Watchmen, by Geoff Johns and Gary Frank, published by DC Comics, and concluding with this week's long-awaited twelfth issue. Initially, the links to Watchmen were obvious, as well as the returning characters and history, we had the nine-panel grid, transitional scenes, mysteries baked in, the world-building with documents, a laid-out history and alternate history of a world, with the details of history impacting heavily on the present – if not always obvious.

But during the storyline, it became something else. If Watchmen was intended as a last word on superheroes, Doomsday Clock is all about why superheroes have longevity, and specifically, the original superhero that would embody all the tropes that would one day be common, Superman.

Geoff Johns, its writer, worked in Los Angeles, as a production assistant alongside Superman movie director Richard Donner in his production studio, after cold-calling his offices. Johns considers Donner his mentor, and he met DC Comics people through that work.

His career can be seen as a revivalist one, from Stars and S.T.R.I.P.E. to the Justice Society Of America, to Green Lantern where he brought back Hal Jordan, and The Flash where he brought back Barry Allen. As DC Comics CCO, when the New 52 hit, Geoff Johns did his best to ignore it. His Green Lantern books continued without missing a beat, and on Aquaman, he managed to ignore the edict that married superhero lead couples be retconned away, just simply not mentioning that Arthur and Mera were married – just continuing to write them as if they were. Five years down the line, he got the chance to reboot that reboot with DC Rebirth, working with every writer to redefine who the characters they were writing were, saw a cross-the-line rise on sales, and critical and sales success especially for the Superman, Batman and Flash titles, while he used his DC Rebirth to launch a number of plotlines, including Doomsday Clock, and revivals for the Justice Society, Shazam and the Legion Of Super-Heroes. Although lateness would mean he'd have to wait, and others would get there first.

In Watchmen, Dr Manhattan says he is leaving his world for a simpler galaxy. His arrival in the DC Universe in Doomsday Clock implies that the comic book world is simpler than the real world. Maybe nicer, maybe more altruistic. 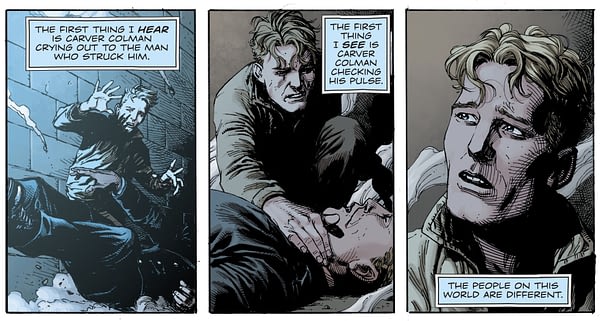 First, we have Dr Manhattan in 1938, the date of the publication of Action Comics #1, the first appearance of Superman. 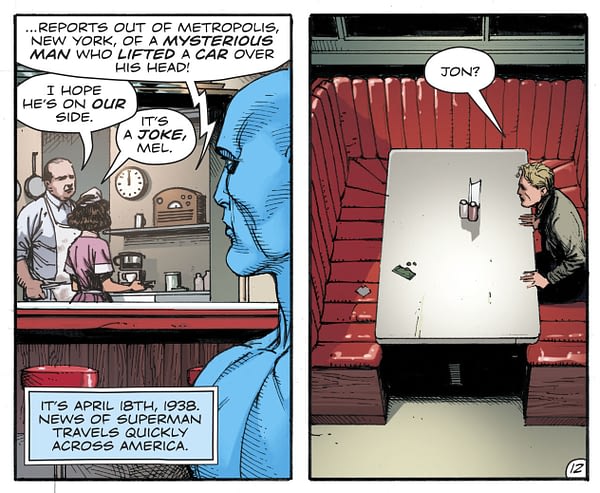 But this is a world where Superman can exist… 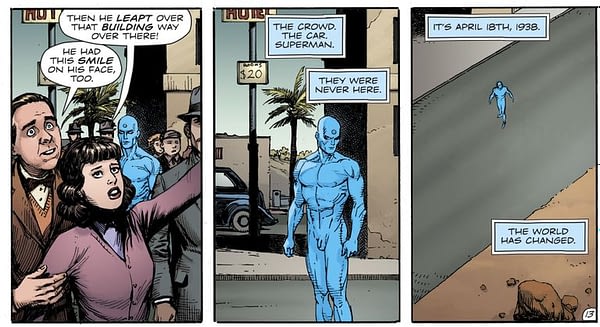 …and suddenly not exist. Because things change, things fall apart and the centre cannot hold. Instead, it moves. And so we have a Justice Society of America, both in the same world as Superman…. 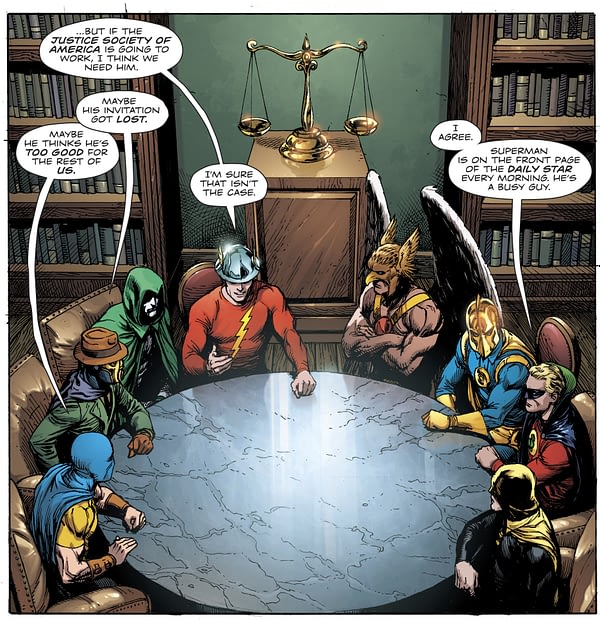 And one where he never was. 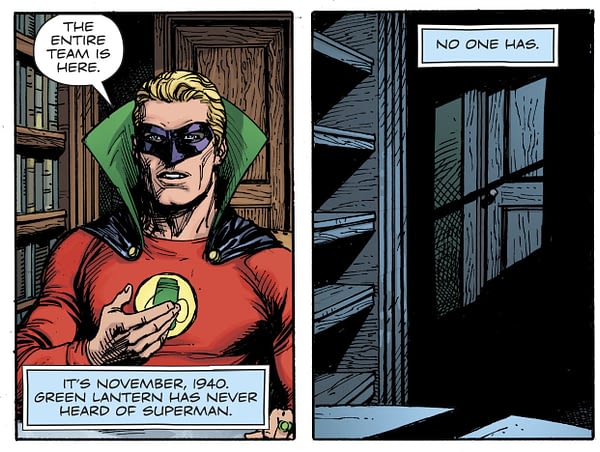 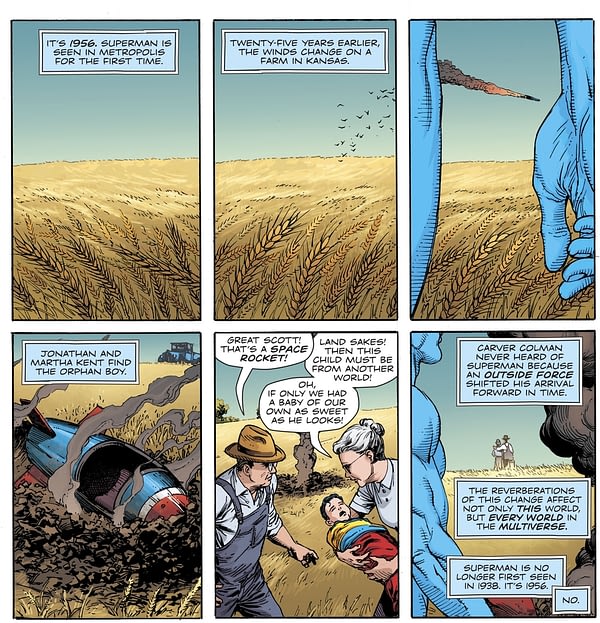 And then we get a jump to the Superman recreated by John Byrne in the eighties in Man Of Steel. As the original story of their deaths as told in Superman #161 from when Superman was Superboy….

…gets retold again. But then… 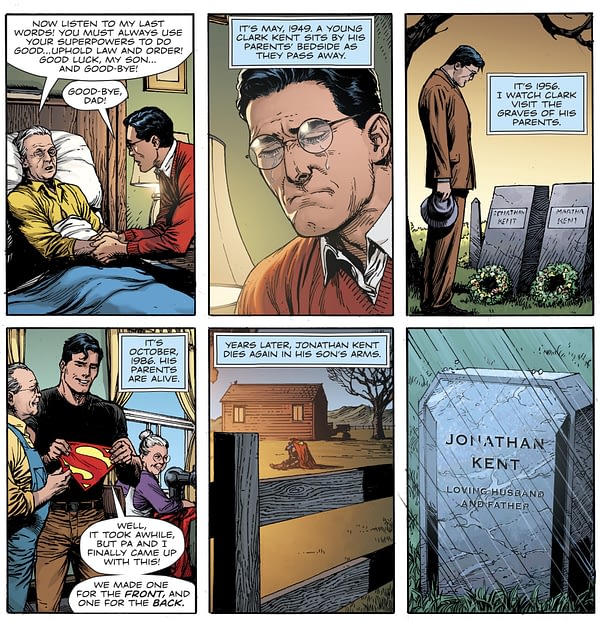 …jumps to John Byrne's rebooting of Superman and retelling his story in 1986 in Man Of Steel. 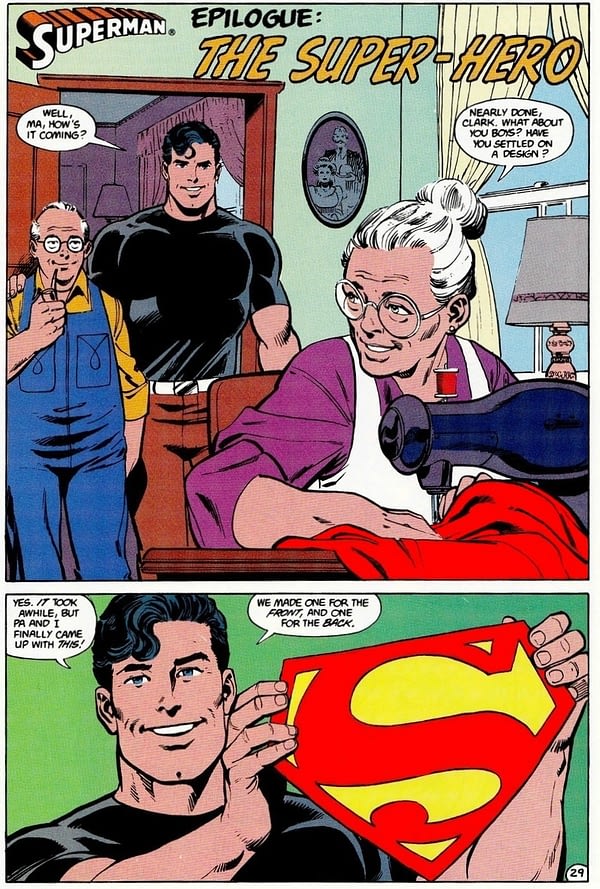 And then again with Mark Waid, Leinil Francis Yu and Birthright. And then again in Superman Secret Origin with Geoff Johns and Gary Frank – the authors of Doomsday Clock. 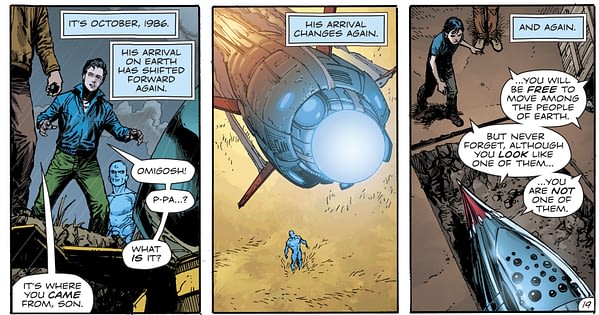 And then we get the big one. We have been told that Dr Manhattan has been retconned into being responsible for the events of the New 52, the 2011 reboot if the DC Universe, with a new Superman from Grant Morrison and redesigned by Jim Lee. And we have a new name for the prime reality of the Universe, and even a reference to the recent Metal series by Scott Snyder and Greg Capullo. 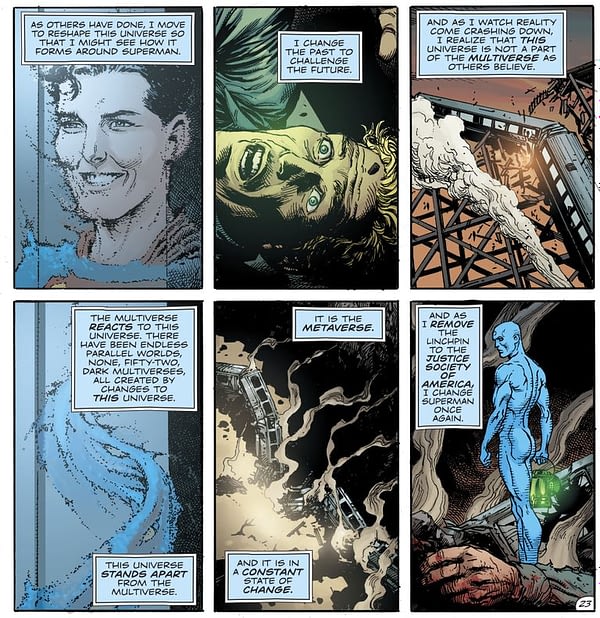 The Metaverse. One change to it, by authors unknown (at least to Dr Manhattan) and every world changes. Arguably, with the publication of Before Watchmen and Doomsday Clock, Watchmen's world changed, by the same hands that changed Superman's world. 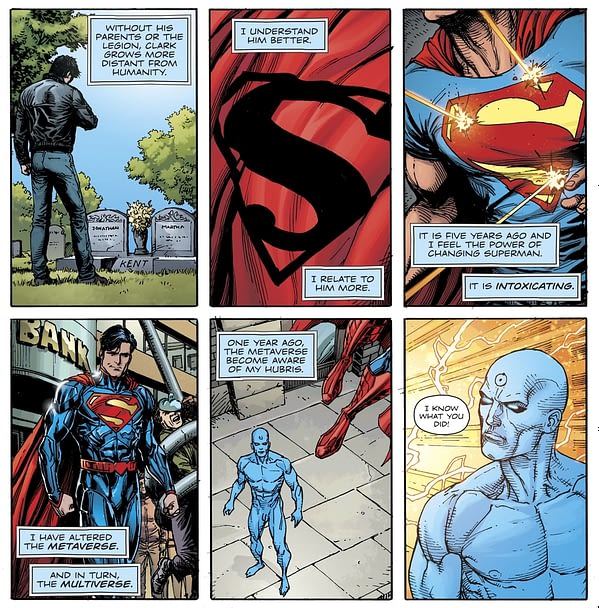 Remember that metallic costume with seams and high collars brought in and the removal of the red trunks? Turns out it was Dr Manhattan rather than Jim Lee's fault. And the events of the DC Universe Rebirth, created by Geoff Johns and Gary Frank, with Geoff Johns sitting down with every DC author to redefine and refocus their approach to the characters – that is the metaverse fighting back, previous, loved realities using creators to reassert their very existence. 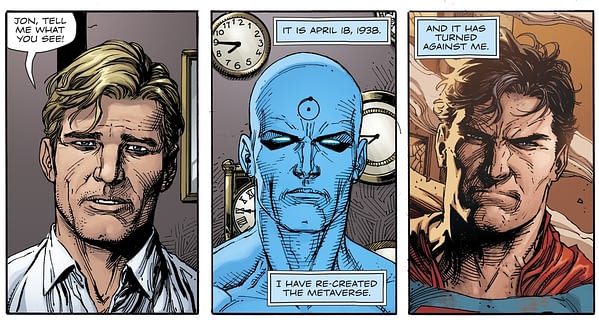 So we have a universe that twists and turns depending on whenever Superman appears. A date, an event that keeps changing, as the story changes. And so Clark dreams of his final day with his parents. 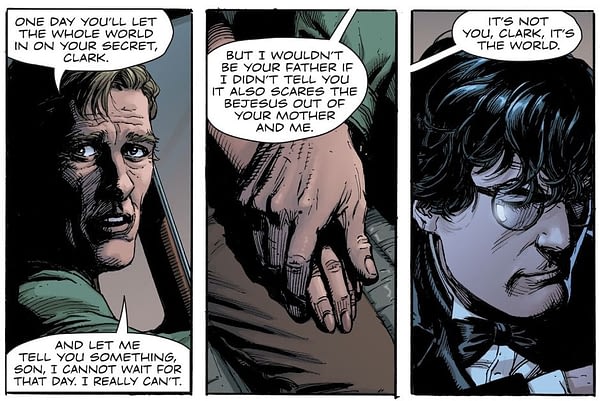 And a car crash. 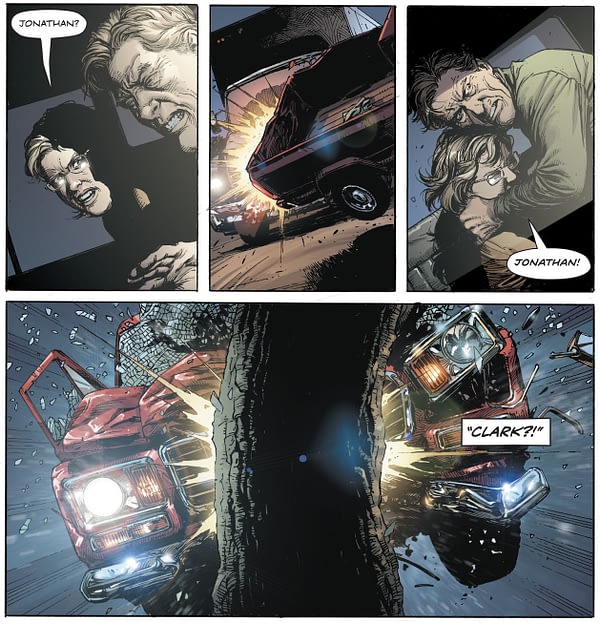 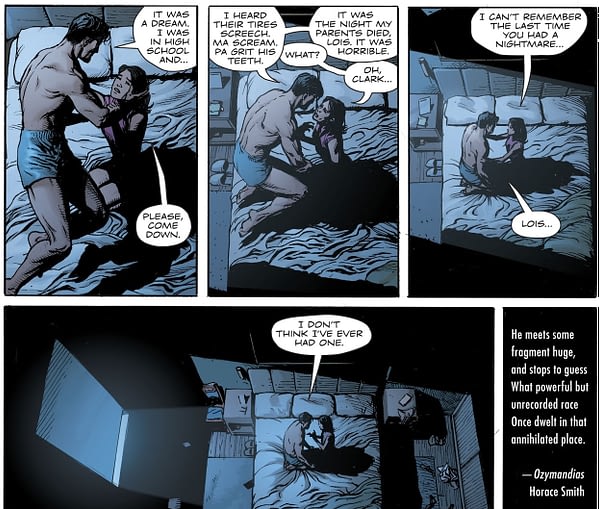 It has now been revealed that Dr Manhattan was responsible for the New 52, by changing DC Comics history, by removing the Justice Society Of America, after he had seen all these changes playing out. Because it is the changing Superman that changes the multiverse, creating parallel dimensions with every rewriting.

But, inspired by Superman, he keeps changing things. And he changes some of them back.

…. and a pre-Metropolis Superboy. A Legion Of Super-Heroes that knew him then (contradicting the current Legion book (again)). And also letting Ma and Pa Kent live on.

And recognising that Superman will keep changing, his story will change, and the world will recreate around him – but each version will be preserved.

For a thousand years more…

As Grant Morrison put it (then nicked by Zack Snyder), he will join them in the sun. Watchmen answered the question 'Who Watches The Watchmen' we the idea 'we do'. Literally picking up the comic, flicking back and forward through time, experiencing the comic as an unchangeable, fixed whole. The reader of Watchmen has the same power as its most powerful character, Dr Manhattabn – and a shared perspective of reality as well. Doomsday Clock, being part of the DC Universe, is changeable. The power to change it resides in the creatives of the time, not the readers at all. But the comic recognises that things will change, and the readers of today may well be the creators of the future – just like Geoff Johns, and able to make their own changes. And yes, I do get an Evan Dorkin Eltingville flashback at this point.

And so Dr Manhattan pays Superman the ultimate comment. With the son of Mime and Marionette who has become a little… Manhattanised in the proceess. Maybe he ate an egg. But just like the HBO Watchmen series, a normal human life is seen as the answer. And so Doomsday Clock #12 takes the child to the Watchmen universe, but gives him something Dr Manhattan didn't have – not when he had powers at least. A chance of a normal life, to ground him. And a new name…

And a suit, briefcase and sensible haircut to boot. All he needs is a pair of thick-rimmed glasses to preserve the illusion. Manhattan loves Superman,. Johns loves Superman. You love Superman.

DOOMSDAY CLOCK #12 (OF 12)
(W) Geoff Johns (A/CA) Gary Frank
This is it! The final showdown between Dr. Manhattan and Superman shakes up the DC Universe to its very core! But can even the Man of Steel walk out from the shadow of Manhattan?In Shops: Dec 18, 2019
SRP: $5.99