Grim #3 from Boom Studios (you may remember them from announcing the return of Irredeemable as a stretch goal) continues the series' strong forward momentum.

The interplay between artist Flaviano and colorist Rico Renzi remains Grim's most reliable calling card. They set up a visual language such that the change of a single color on the scythe can be a reveal in and of itself, and writer Dr. Stephanie Phillips wisely writes to that. There's no wall of text to hammer the point home, there's no need for it. The team is sure enough that they trust their clear storytelling to, y'know, tell the story.

Thanks to a jail scene, we now know which side of the Faith/Void split is Phillips' favorite. Not for nothing, the jail scene, set in a void (huh), is set on a blank page. It exists, and it doesn't, and the blank page is a great way to get that idea of endless nothingness across. It also works as a way to make a deadline a little easier on the team.

Grim #3 is reliably good and consistently surprising. Often, a reader can kind of tell what's going to happen next in a series if they read enough comics or get an idea of three-act structure. While Grim is probably still a three-act structure comic, there's often something a reader can intuit. It's to the credit of Grim #3's team that's as scarce as possible. While it's not as oblique or as vulgar as Faithless (my favorite series from Boom), Grim is quickly becoming one of Boom's best series.

Jess's excursion to the world of the living yields grave consequences when her boss imposes some intense penalties. However, it will take more than that to keep Jess from breaking the rules, especially with the mystery of why she alone can travel between worlds motivating her… 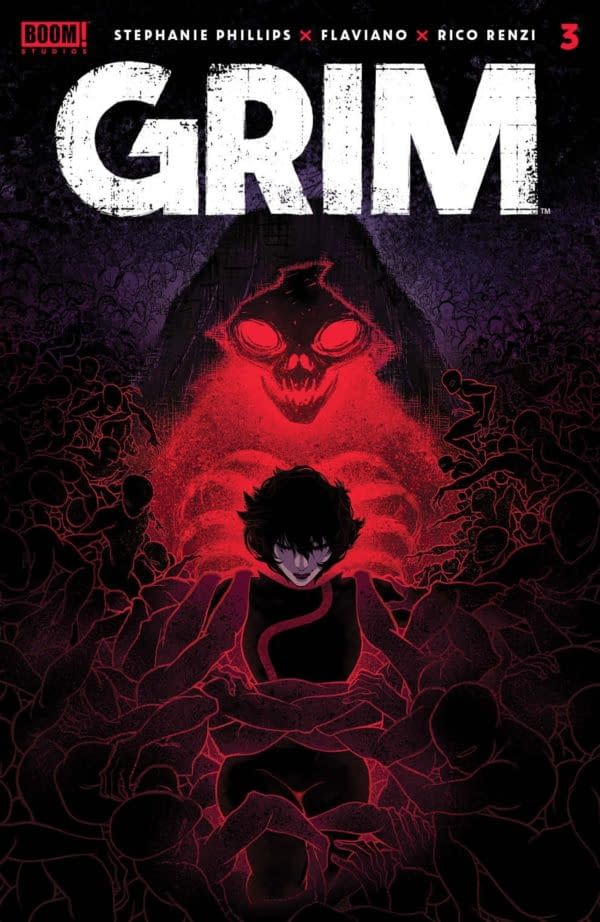