Home » Comics » In Next Week's Uncanny X-Men, a Character Will DIE!!! (Spoilers)

Uncanny X-Men writer Matthew Rosenberg has quit and rejoined his award-winning Twitter account so many times we've lost count, but the X-scribe returned to the social media service Friday to post a tantalizing spoiler for next week's issue, Uncanny X-Men #16. According to Rosenberg, "not everyone will make it out" of the issue. So who is Rosenberg planning to kill off? Does it have anything to do with how cute he is feeling today? Or perhaps he's trying to compete with rival X-writer Ed Brisson for which X-Men writer can senselessly murder the most beloved characters?

UNCANNY X-MEN #16 is in comic shops next week. This is a big one and not everyone will make it out. pic.twitter.com/JADMmmoEd1

But Rosenberg wasn't done spoiling future issues of Uncanny X-Men. The writer also had some teases for what will occur in Uncanny X-Men #17-20, as well as what to expect in War of the Realms: Uncanny X-Men #1-3, featuring events sure to be important because that mini-series is included in X-Men legacy numbering.

Interesting. Perhaps someone less lazy than we are can examine those future covers in an attempt to figure out who will die in Uncanny X-Men #16? You may have to do that, because according to Rosenberg, there's a shortage of available copies of Uncanny X-Men in comic book shops.

With these (and all comics you read) please let your local comic shop know you want to pick them up.

I've been hearing from a lot of people lately that UNCANNY X-MEN and THE PUNISHER are sold out at their LCS before they can get them. And that makes everyone sad. Let them know! pic.twitter.com/m2LR19pFah

Uncanny X-Men #16
(W) Matthew Rosenberg (A/CA) Salvador Larroca
Cyclops and the X-Men have set out to save mutantkind…but the Mutant Liberation Front isn't going to just wait for it to happen! Led by one of the X-Men's own, the MLF is willing to do whatever it takes to stop mutant oppression…even kill any mutant who stands in their way…
Rated T+
In Shops: Apr 17, 2019
SRP: $3.99 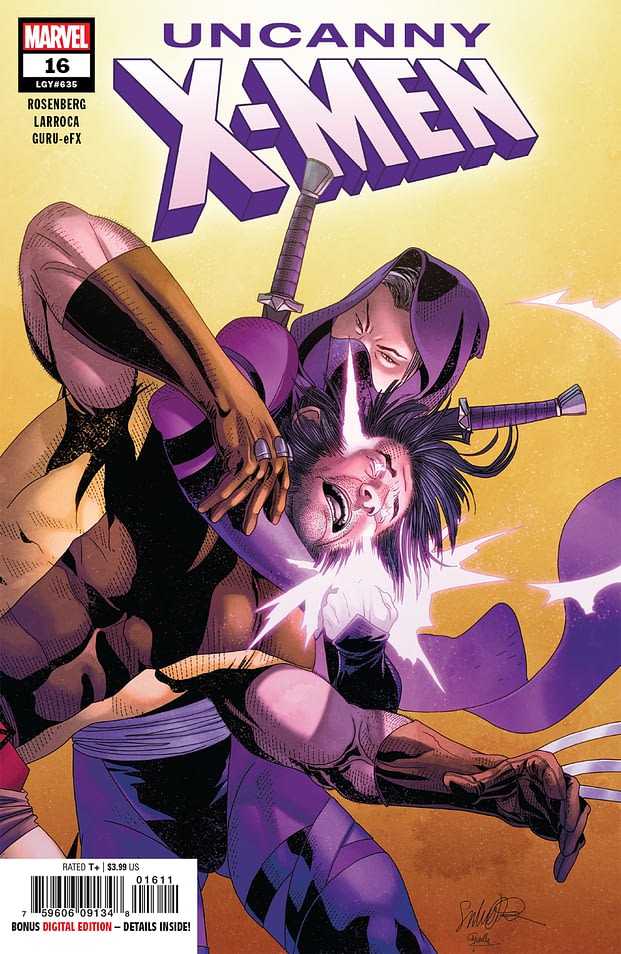