Have you ever imagined that the largest, most insurmountable problems in your life would be just kind of sort themselves out while you lay down for a little nap? Iron Man #19 posits just such a theorem in the lackluster finale of its long-suffering "Books of Korvac" storyline.

For months (as far as we have been reading), Tony Stark has been working to stop the threat of Michael Korvac, a being capable of wielding godlike cosmic power yet having the relative conceptual framework of deposed Eternals. Tony has literally chased Korvac across the universe and back only to find himself back in New York, back under the sway of his addictions, without any of his armor or technology, and at the mercy of Korvac himself.

Much like complaints about Raiders of the Lost Ark, there is an argument that could be made here that Stark's scant verbal contributions to the plot have as much effect as spitting into the direction of a strong wind. There's not a shred of metal, iron, or otherwise worth mentioning in this issue. Stark barely lifts himself higher than being on his knees through the "action" (such as it is) of this issue.

No blame can be laid at the feet of the visual team of Cafu, Frank D'Armata, or Joe Caramagna, who use clever angles, fantastic lighting effects, and delicately placed captions to do their best with this work. No, sadly, the script from Christopher Cantwell fails to deliver thrills, emotional clarity, or anything resembling heroism. This book doesn't show a protagonist overcoming a great challenge; it showcases the worst parts of Tony Stark failing up again and avoiding the consequences of his actions, like a Supreme Court justice who lied at their confirmation hearing.

There's one good thing to say about this story: it brings the exhausting "Books of Korvac" to an end, and that at least opens the door for something else to happen. The cover tells the tale — the greatest threat to Tony Stark, if not the Marvel universe as a whole, just might be Tony Stark. RATING: NO. JUST … NO.

Iron Man #19
By Christopher Cantrell, Cafu
AT LAST, THE STUNNING CONCLUSION OF THE BOOKS OF KORVAC! Tony Stark must face Michael Korvac once again, and once and for all. No cosmic powers, no allies or henchmen, and no…armor? This is the very end of a very long and very rocky journey; Tony's going to have to get by on his own blood, sweat, and tears. For the first time in his life, he's all out of ideas. 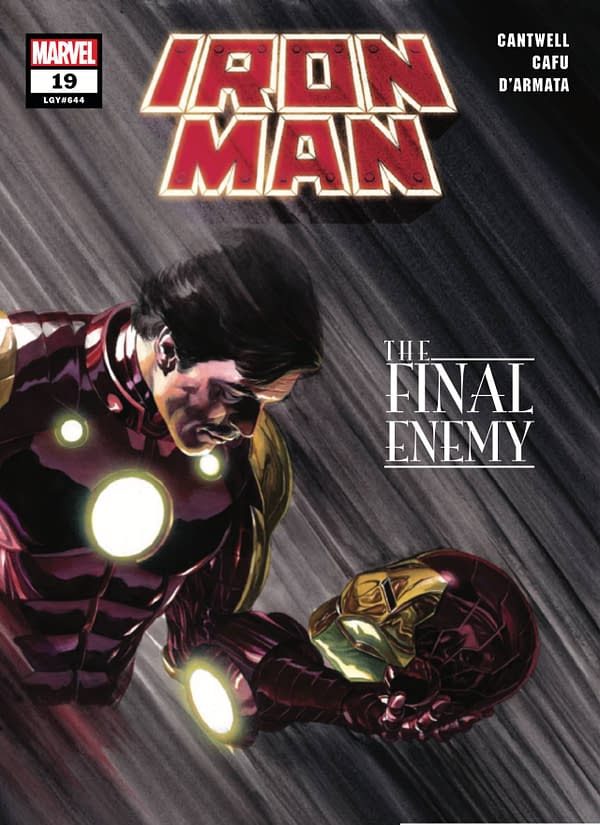 Review by Hannibal Tabu
4/10
Tony Stark may as well not even be in this book as he has next to no impact on its outcome, leaving the car in the control of the unstable Michael Korvac.
Credits
Editors
Akira Yoshida, Tom Brevoort, Annalise Bissa, Martin Biro

Will Batman and Catwoman really tie the knot in Batman/Catwoman #12? Fool us once, Tom King...

Marvel To Republish & Finish Miracleman: The Silver Age From October

It was first published by Eclipse Comics as Miracleman #23, the first issue of Miracleman: The Silver Age by Neil Gaiman and Mark Buckingham in 1992. Ten

Scholastic Editor Calls For YA Books/Graphic Novel Pitches On Abortion

Crowdfundr, a new platform for crowdfunding self-described as "designed with creators in mind," has launched with multiple campaigns live now.