I was truly saddened to learn about the passing of my old friend and colleague, artist Ernie Colón, only a couple of days after I learned of the serious condition of his health. We hadn't been in touch for a few years. Early in this decade, I had phoned him about the possibility of our working together on a graphic novel about the assassination of John F. Kennedy, given his connection with the graphic novelof the 9/11 Commission a bit earlier. But Ernie was already in discussions about a graphic novel of the Warren Report, which was something rather different from what I had in mind… and I never really approached anyone else about my own idea.

I first met Ernie at Marvel, I believe, when he penciled a story for The Savage Sword Of Conan. I was familiar with his work, and didn't think the finished art (pencil and ink) was quite the look I wanted for the Cimmerian, but I liked Ernie and was impressed with him as a person and as a storyteller, so I had him pencil and story. I believe Tony DeZuniga inked it, with an eye toward making it blend in with the numerous John Buscema-penciled stories that Tony had inked. Ernie didn't seem to mind.

Somehow, when I went to DC in the early 1980s, Ernie and Tony became the logical team to repeat that process with the Arak, Son Of Thunder title Dann Thomas and I had conceived. And he did a fine job in those early issues. Later, as an experiment to see how it would go over, I had him both pencil and ink a few issues. Quite frankly, I'm not really certain how it played with readers, but by then ARAK was beginning a slow slide anyway. Certainly Ernie's stories were distinctive, and I enjoyed working with him.

Dann and I often had dinner with him and his first wife, a psychologist, when we were in NYC on DC business in the first half of the 60s. We didn't get much chance to work with that after he'd moved on from Arak, but we always considered it a tantalizing possibility that was out there. From time to time some kind comment he would make about me and my work would reach me… and I hope I reciprocated often enough. Certainly we respected each other, and I'm sorry that somehow we never wound up working together again.

Ernie Colon was a talented guy–also an intelligent one, and a nice one as well. The comics field could use more like him. 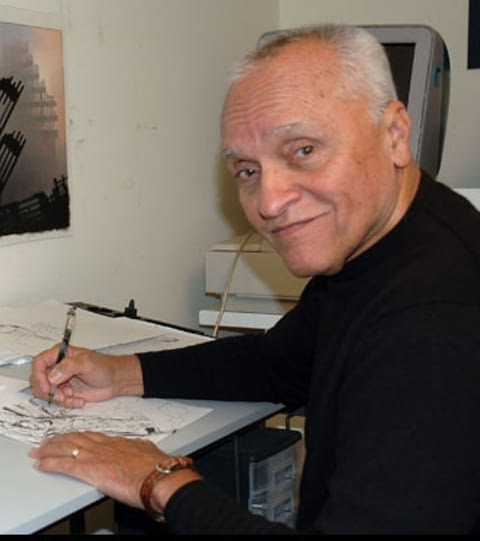