Last night saw the world premiere of The Windsors: Endgame, the West End stage spinoff of the bawdy satirical Channel 4 TV sitcom that parodies the lives of the royal family and its hangers on. A goodly chunk of the TV cast reprise their roles including Harry Enfield as Charles, Matthew Cottle as Andrew, Tom-Durrant Pritchard as Harry and Tim Wallers as Edward, with big names such as Tracy-Ann Oberman taking on Camilla. Not only was it a world premiere but, as the director Michael Fentiman who took to the stage to introduce the performance told us, they hadn't even been able to have a dress rehearsal and apologised for the inevitable flubs that would follow.

And yes there were a few, but the audience was ever so forgiving. Harry Enfield always used to get the audience for his sketch shows to shout "Never Mind Love, You Were Marvellous" if an actor messed up a line, though if he did it everyone was to scream "You Wanker". That wouldn't have been out of place tonight, as The Windsors leaned into pantomime in a variety of ways, some deliberate, some not. Tim Waller as Prince Edward was out Buttons, he became our confident. Reflecting that the real Prince Edward once worked in theatre, he didn't actually play Edward when on stage, instead a variety of background characters, constantly mugging to the audience, speaking directly to us and getting us to treat Camilla as the Pantomime baddy. Which Tracy-Ann Oberman utterly did, as much as her Torchwood head in Doctor Who.

The sitcom famously portrayed showed the Queen or Prince Phillip, here we get Harry Enfield playing the Queen in shadow at the beginning as she chooses to abdicate after the death of her husband, before leaping off stage. With Charles taking the throne while Camilla Lady Macbeths him to greater heights, while Harry, Wills, Kate and Meghan fight among themselves and across the media, while Beatrice and Eugenie plot to restore their father's reputation, as they are convinced he is innocent of being a nonce. And Fergie? She's working as a cleaner for Harry and Meghan after they rescued her from working in animal porn.

And yes that is the level at which we are operating. From Charles' pendulous testicles, to Fergie's freckly bangers, to Andrew's constant perving to the cast's various, frequent and tangled sexual shenanigans, the glorious Hogarth-to-Gillray-to-Scarfe traditions of treating the mighty as muck continues on stage, using the strengths of the medium to break into song, slow-motion fight scenes with Goop candles, and even a little wire work as Charles ascends to godhood. Harry Enfield has had a career-making himself look as ridiculous as possible, but this condenses it. A lot of British comedy comes from the gap between how a person perceives themselves and how everyone else perceives them – which is Prince Charles to a T, all Enfield has to do is lean into it and wear the most ridiculous pompous clothing and you have guaranteed laughs. Though I'm not sure if his poor singing is Charles' lack of perception, or Harry's.

Because, yes, in this Spamalot-Meets-Spitting Image, there are several songs through the show, and everyone gets a go – even the ill-advised Harry Enfield as Charles concocting hymns to himself – with the standout being Tracy-Ann Oberman's Cruella-like diatribe against Diana, her memory and Elton John. And a denouement spoiled by a curtain that didn't rise at the right time on the night, was embraced by the cast and loved by the audience even more.

Talking of guaranteed laughs, Jenny Rainsford and Eliza Butterworth as Beatrice and Eugenie may be the best value for money, as they milk the most ludicrous vowels for any and every word they can, with utter hilarity, conspiring with their beautifully desperate mother, played by Sophie-Louise Dann. It is such an easy joke to do, and such a guaranteed bellyful of laughs that simultaneously poke fun at the royal detachment from everyday people, while also making them seem utterly ludicrous, all from how many different vowels you can stuff into the word "innocent", when trying to get your dad off from him getting himself off. Jimmy Saville and Rolf Harris comparisons are brought in with gay abandon, while Tim Wallers' Prince Andrew remains self-confidently nonplussed, even when reduced to a court jester making Camilla laugh with tales of Pizza Huts in Woking. Everyone gets a kicking, Andrew may get the most, but he seems to be able to take the slings and arrows of outrageous fortune better than any of them.

Overall, the show's greatest weakness is that The Windsors: Endgame comes one shutdown after Upstart Crow did a similar TV-to-stage trick with greater success (though without Enfield who also starred in that TV). And even after the timing of The Windsors: Endgame is tightened up and the creases are ironed out, The Windsors doesn't have the earned storytelling of Crow, it's more that one thing happens after another. Very entertainingly, of course, and most amusing, but it feels flimsy, but it may have needed yet one more draft to set things up better, to tie everything all together in a neater fashion, something their TV version was better at accomplishing. Or maybe, like Charles and those prosthetic testicles, it's just happy to let everything hang out in a slipshod and haphazard fashion. There is an appeal in that too. Clearly, there has been some up-to-the-minute rewriting during lockdown to reflect the royals' own misfortunes which also adds to a topical pantomime feel, even when Charles refuses to bow to the audience at the curtain call, rather that we bow to him. It's also a cheap way to get a standing ovation too…

But it wasn't hard to come by. It's a long time since any of us have been to the theatre, everyone in attendance was double jabbed, or had a negative test, though I'm not entirely sure the security was tight enough to ensure either.

The Windsors: Endgame is by George Jeffrie and Bert Tyler-Moore based on their Channel 4 sitcom The Windsors, is playing out at the Prince Charles Theatre, London, right now. 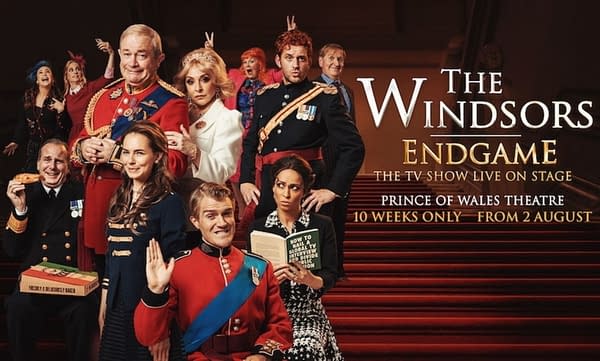 Review by Rich Johnston
7.5/10
The Windsors: Endgame is Spamalot-meets-Spitting Image, lewd, rude, crude, and very funny. Fun for all the family as long as your family is inbred, detached from reality, and shagging each other constantly.
Credits
Actor
Harry Enfield
Director
Michael Fentiman
Actor
Tracy-Ann Oberman

Constantine Sequel News? Damn Them All Instead

In April last year, Bleeding Cool got the scoop that Alan Moore was to publish a collection of short stories, out next month, which will include what is

Constantine Sequel News? Damn Them All Instead

In April last year, Bleeding Cool got the scoop that Alan Moore was to publish a collection of short stories, out next month, which will include what is