Based on a novel by Jason Fry, Star Wars Adventures: The Weapon Of A Jedi #2 is an adaptation of a Luke Skywalker adventure poised between A New Hope and The Empire Strikes Back takes on some of the would-be Jedi's path towards power and understanding. It fills in some holes in the legend of the second Skywalker from Tattooine and makes a lot of things add up.

Luke has taken his droid pals R2-D2 and C-3PO on a clandestine mission for the Rebel Alliance that, frankly, he's kind of ignored. Instead, he's gone off on a side quest to discover a lost Jedi training ground (one that will be familiar to fans of some recent video games) in order to level up and get his game together. Luke spends a long weekend being slow to remember the words of Obi-Wan Kenobi and beginning to develop his Jedi skills (especially telekinesis and precognizance) prior to his trip to Dagobah.

On the good side, the script from Alec Worley is patient in showing the time Luke spends figuring things out on his own, providing the seed of "trials" worthy of a knight. The artwork from Ruairi Coleman, Chris O'Halloran, and Amauri Osorio does an admirable job showing the training in close focus for most of this issue.

The only challenges that held this back were the supporting characters. From the non-descript Imperial threat (even by their standards, these were losers) to the would-be problem looking over Luke's shoulder, they were all forgettable and predictable in their actions. That kind of thin opposition doesn't give Luke a chance to shine, and the droids mostly serve as a worrisome Greek chorus.

This is a great bit of information for the transphobes at Wookieepedia but falls short of an adventure to truly show the legend being formed. RATING: HONORABLE MENTION.

Star Wars Adventures: The Weapon Of A Jedi #2
By Jason Fry, Alec Worley, Ruairi Coleman
The Rebel Alliance has destroyed the Empire's dreaded Death Star, but the Imperial Starfleet continues hunting the rebels throughout the galaxy. Luke Skywalker now seeks to support the Rebellion as an X-wing fighter. But as he flies with the pilots of the Red Squadron, Luke feels the stirrings of the Force. And this farm boy turned fighter pilot begins to suspect that his destiny lies along a different path.

Star Wars Adventures: The Weapon Of A Jedi #2 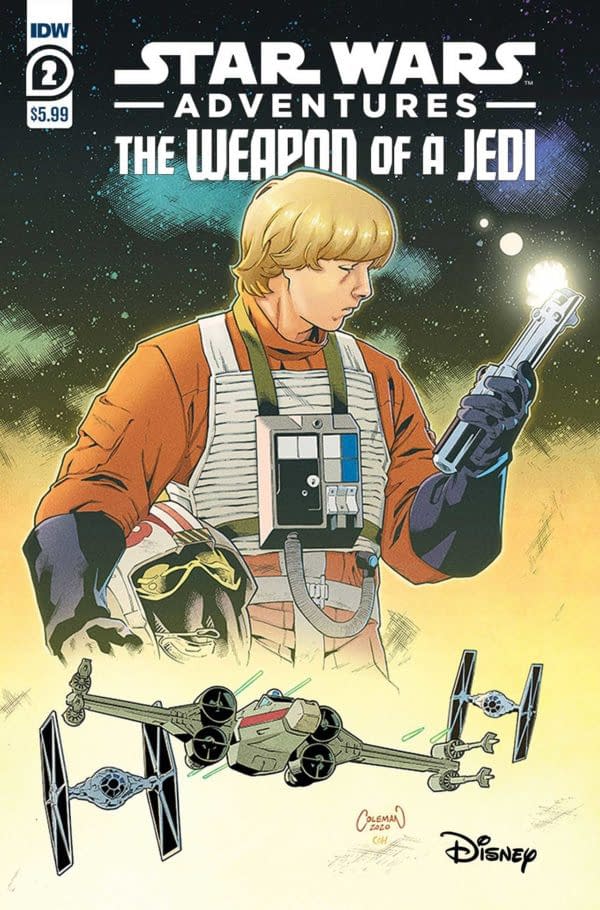 Review by Hannibal Tabu
7.5/10
Supplementary training in the Jedi arts on a distant world gives Luke some better grounding in his power but falls down on adversaries to overcome.
Credits
Editor
Elizabeth Brei, Riley Farmer

Daredevil may be a Marvel comic book hero and TV/movie star, but there was a Daredevil superhero comic book before Marvel's in the public domain and it is

Mikhail Bergkvist launches NOA - Not Otherwise Authorized - in Source Point Press' August 2022 solicits and solicitations, alongside Dandy of the Lavender