With an admirable modern spirit straining against unfortunate similarities with the past, Superman: Son of Kal-El #8 tries to chart a new path for the young hero. Unfortunately, the parallels between the elements of Jon Kent and his father's life that are too numerous and too similar to distinguish the work.

Superman's boyfriend Jay works with an activist group called The Truth, a mix of WikiLeaks and Greenpeace determined to make the world better. Yes, Jon's father dated and married the star reporter of a bustling metropolitan newspaper, but that's just happenstance.

They're bringing the public shaming to the likes of Henry Bendix, sci-fi president of the outlaw nation Gamorra (no relation to the Guardian of the Galaxy). Yes, Bendix is a bald-headed rich white cishet super-genius with a beef against a cape wearing Kryptonian. The sad derivative stands out because he's teamed up with Lex Luthor, both literally phoning in their super-villainy. Two similarities? Merely coincidence, right?

Then there's a team-up — Jackson Hyde, the tyro hero called Aquaman following in Arthur Curry's footsteps, is on hand to face off against The Gamorra Corps (seriously), people gifted with synthetic superpowers by Bendix sent to show up the second Man of Steel. Their very high mortality rate in the face of a threat they barely understood should have been embarrassing. Still, their power lies in public relations and not actual superpowers, calling Jon's heroism into question in the court of public appeal. The world turned against a Superman who has to regain their trust, that's the third similarity to a LOT of past things, and that feels almost like enemy action.

There are fantastic moments of characterization and dialogue here. Writer Tom Taylor has a fantastic sense of the players here, while the artwork from Cian Tormey, Raul Fernandez, Federico Blee, and Dave Sharpe delivers the bright, bigger-than-life adventure well enough. Unfortunately, the Son of Kal-El has not done enough to step out of his father's shadow, and with so many parallels, it makes him look like a placeholder wearing his daddy's clothes until the man of the house gets back. RATING: HONORABLE MENTION.

Superman Son Of Kal-El #8
By Tom Taylor, Cian Tormey
Henry Bendix's plans for ultimate control threaten every superhero on Earth. And, in trying to stand against the dictator of Gamorra, Superman makes himself a target of business and world leaders. He is seen by too many as a force that must be stopped. How much can even a Man of Steel stand against before he bends? 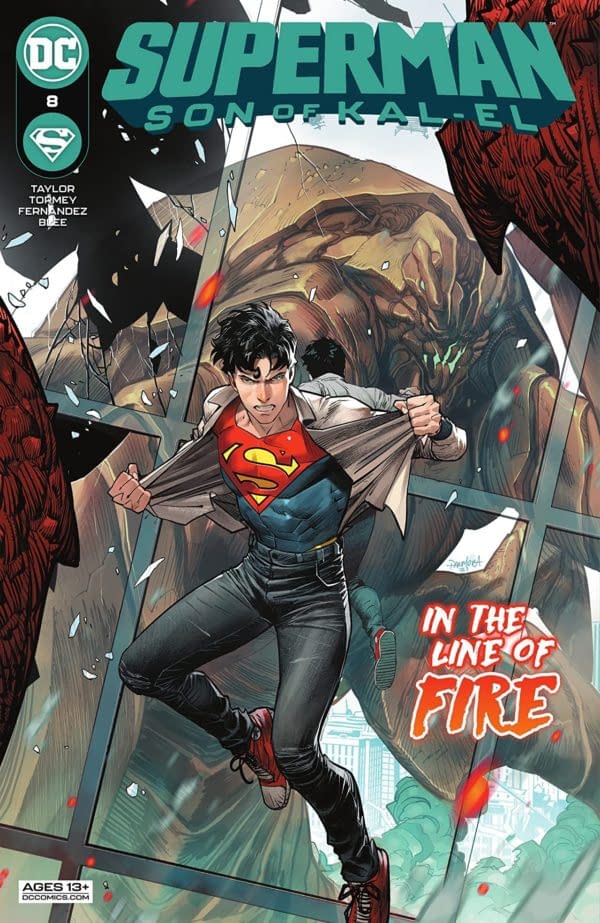 Review by Hannibal Tabu
7/10
A gargantuan from the sea threatens Metropolis, and the Gamorra Corps are on the scene … but is that really a good idea, when Superman and Aquaman are already there?
Credits
Editors
Paul Kaminski, Jillian Grant