Hocus Pocus 2 will not change your mind depending on how you feel about the first film. If you find the first overrated, boring, and too over the top, the sequel is more of the same. But if you find the 90's Halloween staple to be charming and enjoy the rapport between the Sanderson Sisters, you will have a grin on your face the whole time. One wishes they spent more time making us care about the new cast additions, though.

Hocus Pocus 2 Should Join The First As A Halloween Staple

The film follows Salem teenagers Becca and Izzy (Whitney Peak and Belissa Escobedo), who accidentally bring the witchy Sanderson Sisters (returning Bette Midler, Kathy Najimy, and Sarah Jessica Parker) back to life while performing their yearly Halloween night ritual. From there, it is a race against time to stop them from abducting the town's Mayor (Tony Hale) and stop them from becoming immortal, also enlisting the help of their friend, the mayor's daughter Cassie (Lilia Buckingham). Even zombie Billy Butcherson (Doug Jones) joins in on the fun.

You know what to expect here. Numerous jokes about the Sanderson Sisters not understanding modern tech and other such things lead to the biggest laughs. There are also too many callbacks to the original Hocus Pocus to count, as it ticks all of the nostalgia fare boxes along the way. What's really bothersome is how neutered the Sanderson Sisters are. Say what you will about the silliness of the first one; they always felt dangerous. Here, it is hard to believe they would ever harm a hair on a child, lest we get one less joke. Director Anne Fletcher keeps everything light, and a little hint of sinister would have done wonders here. Since the focus is so hard on the trio, the other new characters suffer. All three teens do a fine job but are not asked to do much. Same for the other adults in the film.

Did we ever need a Hocus Pocus 2? Probably not, but it could have been much worse. In the end, if you enjoy the first film, you will probably like the follow-up. If you didn't, there is nothing to see here. What will happen, though, is that it will further cement the Sanderson Sisters as the Halloween icons they have become over the years. 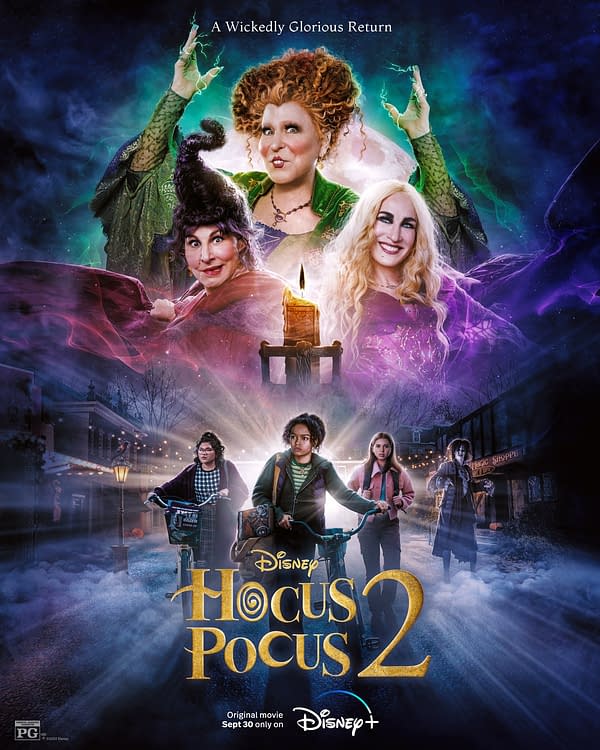 Review by Jeremy Konrad
5/10
Hocus Pocus 2 is on the same level as the first, though the Sanderson Sisters have been completely stripped of any hint of danger. If you liked the first, you will like this one.