Hotel Transylvania is an unlikely success story, as the first three films in the franchise have grossed $1.3 billion somehow at the box office. While the first three films were average at best, they do work in a sense as an introduction of sorts for all ages to horror, so it is hard to knock their existence too much. Not the case for the latest installment, Hotel Transylvania: Transformania, the early frontrunner for worst title of the year and also devoid of any entertainment or joy.

Hotel Transylvania Should Have Stopped At 3

Gone from the director's chair is Genndy Tartakovsky, and also gone from the film are Adam Sandler and Kevin James, who voiced Dracula and Frankenstein in the other three films. When Van Helsing's new invention, the "Monsterfication Ray," goes nuts, all of the monsters are turned human, while Drac's son-in-law Jonathan (Andy Samberg) is turned into a monster. Together, they have to find a cure while also trying not to drive each other crazy. Selena Gomez, Kathryn Hahn, Jim Gaffigan, Steve Buscemi, Molly Shannon, David Spade, Keegan-Michael Key, Brian Hull, Fran Drescher, Brad Abrell, and Asher Blinkoff round out the voice cast.

It is funny to me that most of Sandler's pals return for this Hotel Transylvania film, but Sandler himself was like, nah. None of the cast turns in any kind of enthusiastic performances; it all feels very low energy and like they basically showed up for a couple of hours and then left. This film has been done forever, saw a bunch of Covid-related delays, and Amazon purchased the rights for $100 million. Since it cost next to nothing to make, Sony made money here, and the best guess is they knew they had a subpar film on their hands.

Just read that quick summary up there again, and you will instantly know every joke, story beat, and cheap emotional beat that they will throw at you. This is not a franchise that has ever looked breathtaking from an animation standpoint either, so the previous films relied on a story and heavily leaned on the voice cast to carry the day. So when the cast can't be bothered and everything about the script is predictable, you are not left with much to grab onto as a viewer. It all feels like a feature-length episode of a sitcom that just never ends, and there aren't even commercials to look forward to.

Hotel Transylvania: Transformania is boring, predictable, and lacks anything that resembles entertainment. While never great, the three previous films at least provided some laughs. This final film in the franchise has none. It is now streaming on Amazon. 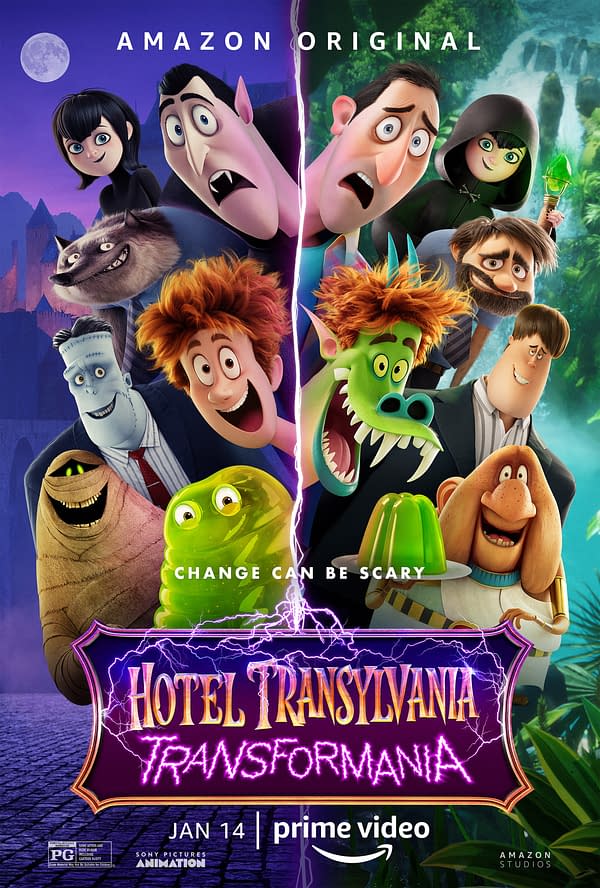 Review by Jeremy Konrad
2/10
Hotel Transylvania: Transformania is boring, predictable, and devoid of any entertainment value.

Spider-Man: No Way Home Swings Back To The Top Of The Box Office

Spider-Man: No Way Home took back the crown from Scream at the Weekend Box Office, snow and pandemic be damned.

The GI Joe team at Hasbro kicked off the Fan First Friday for 2022 with new Classified and O-ring reveals!

Spider-Man: No Way Home Swings Back To The Top Of The Box Office

Spider-Man: No Way Home took back the crown from Scream at the Weekend Box Office, snow and pandemic be damned.

Netflix is eyeing the last quarter of 2022 release for Knives Out 2. It'll get a streaming and theatrical release and do the fall festival circuit.

The Batman Has a Runtime of Just Under 3 Hours

The Batman has a runtime of two hours and fifty-five minutes, making it the second-longest theatrically released superhero movie behind Avengers: Endgame.