Jurassic World Dominion is ultimately an unsatisfying ending to both new and old franchise fans with a weak script, some dodgy special effects, an unspeakably long runtime, weird structure, and pacing issues while awkwardly ignoring the Stegosaurus in the room.

Director: Colin Trevorrow
Summary: Four years after the destruction of Isla Nublar, dinosaurs now live–and hunt–alongside humans all over the world. This fragile balance will reshape the future and determine, once and for all, whether human beings are to remain the apex predators on a planet they now share with history's most fearsome creatures in a new era.

It really wasn't a surprise when they decided to make Jurassic World back in 2015. Jurassic Park remains one of the classics, and there are people making movies now that got into movies because of that film. However, there were a few things that World seemed to miss from the source material. Mainly that the point was, no matter how cool all of this looked, making Jurassic Park was a bad idea. Even so, the movie and the sequel were massive hits, with Fallen Kingdom promising that we were going to see a world with dinosaurs living among us. The world adapting to that and preventing ecological collapse because the dinosaurs aren't part of the natural order anymore and are going to throw everything off seemed to be the throughline for the final movie. However, dinosaurs and their interactions with humans aren't explored in Jurassic World Dominion because this movie isn't sure what it wants to be about.

The topic of ecological collapse and invasive species absolutely screwing up the natural order is actually a central plot point in Jurassic World Dominion. It's tangentially related to the dinosaurs at best, and the other half of the plot remains all about the cloning and the girl from the last movie, so, again, very little focus on the dinosaurs. The thing is, the spectacle of the first movie could be on the dinosaurs and not much more because we hadn't ever seen anything like that before. They ended up with some memorable characters, but the spectacle is the thing that everyone remembers today. However, it's 2022, and we've seen all of this before, and you need a lot more than a spectacle to keep the lights on in a movie theater these days. You need a good story and characters to go along with that, but the characters have been the weakest part of these newer movies.

Owen and Claire remain two of the blandest protagonists that we have seen in a very long time, and it's impressive that Chris Pratt and Bryce Dallas Howard still have absolutely no chemistry after three whole movies together. Isabella Sermon continues to try her best to make Masie an actual character instead of just a maguffin. However, considering how many people in the actual story think of her as a thing rather than a person, you would think the script would go out of its way to point out how much she very much is. However, her entire story can be summed up as "fourteen year old has an identity crisis and undervalues the people taking care of her," which is a plot point we've seen about ten billion times already. The three returning characters coming in for a victory lap also try their best, but Sam Neill and Laura Dern are mostly given the plot point that is only tangentially related to dinosaurs. So we have the two returning players from the original movie coming back and doing stuff that has nothing to do with dinosaurs. That's a choice. The only good choice is that they don't give Jeff Goldblum much screentime or much to do since his antics and weirdness aren't endearing; they are just creepy, much like the actor himself. The movie is also very proud that it has the returning cast members that it seems to be going for these moments where a crowd is supposed to react. However, there was no crowd reaction, and the second that the movie almost seemed to pause for that reaction was so uncomfortable to watch. It was like the production was glaring at you, waiting for you to start applauding.

The lone bright spots in Jurassic World Dominion among the cast are DeWanda Wise, who is clearly having a ball being the one person not carting around a ton of baggage from previous movies and just cracking wise in the background. She has a great presence, but there isn't enough of her, and her purpose in the film is awkward. There isn't a reason for her to be there aside from "a person doing bad things has a change of heart," which is, again, a character arc we've seen a million times. Campbell Scott is our latest villain, and he seems to be doing the same thing most people do when they are playing a bad guy these days, which is do a low-key Elon Musk impression. Aside from that, he is probably one of the more believable Jurassic World villains in that his issues come from greed and negligence rather than anything else, which is probably how the world is actually going to end. Some rich idiot tries to get ahead and ends up killing all of us.

Jurassic World Dominion might be excused for all of these things if it flew by at a brisk pace and didn't overstay its welcome. Still, they decided that the final entry into this franchise needed to be as massive as possible when it came to the runtime. It clocks in at a bloated 147 minutes, and the weird structure and pacing just make everything even more awkward. The movie has to stretch to find a way to make the two groups of characters meet up the way they need to for the final act, and the stretch is bad enough that someone is at risk of pulling a muscle. This is a movie about dinosaurs coming back, and if the coincidences and suspension of disbelief are bad enough that they are standing out, we have a problem.

The entire movie isn't all bad. There are some moments where it works, such as when Grant, Stadler, and Masie have to make their way through a tunnel that has a bunch of dinosaurs stalking them. The moment where Claire needs to bring herself underwater to hide from a blind dinosaur is probably the best moment in the entire movie and really captured a sort of visceral fear that we haven't gotten in a long time. When the special effects are working, they look spectacular, and the script does toy with some decent ideas even if it doesn't know where it wants to go with them. Some fans will likely walk away just happy to see the three leads returning to the big screen together, and if they get joy out of that alone, then good for them.

Jurassic World Dominion clearly wanted to go out on a bang, but the script is really the thing that keeps this movie from working on most levels. It makes it unsatisfying for both old and new fans of the franchise, it makes the pacing and structure problems worse, and it somehow makes the dinosaurs in the real world plot point feel secondary when that seemed like the whole reason to make this movie in the first place. There are likely some that will walk away, and it will be enough to see Neill, Dern, and Goldblum near a dinosaur, but beyond that surface-level stuff? This movie has no idea what it wants to be or what it is even about. 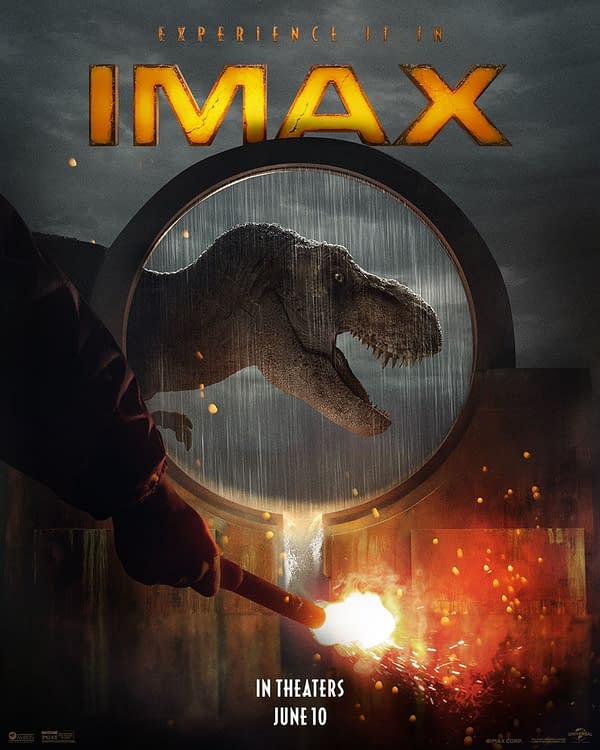 Review by Kaitlyn Booth
4.5/10
Jurassic World Dominion is ultimately an unsatisfying ending to both new and old franchise fans with a weak script, some dodgy special effects, an unspeakably long runtime, weird structure, and pacing issues while awkwardly ignoring the Stegosaurus in the room.