Malignant opened in theaters and simultaneously on HBO Max last night, the big return to horror for James Wan after stepping away for what has seemed like an eternity. Wan wanted to fit a new and unique horror film in before stepping back into the sea with Aquaman for another go-around with the water-based hero. You could tell that even in that first film, he wanted to take it into some more horror-based directions but had to restrain himself a bit. Horror is just in the man's blood, and after five years away, we welcome him back with open arms. Thanks to the $1 billion box office of that first Aquaman film, he can do what he wants now, and boy, does he swing for the fences with Malignant.

You are not prepared for the third act of Malignant.

Unrestrained and bonkers in both tone and execution, this is James Wan's love letter to 80's slashers and giallo. We open in an asylum, with a bunch of gruesome murders shown offscreen as doctors frantically try to restrain our killer, and what is striking about this and the rest of the film is how much it leans into the campiness of it all. The one-liners are laugh-out-loud funny, which is not something you would expect going in. From there, we meet Madison, played by Annabelle Wallis, in a role that will have people talking for some time. Wan and screenwriter Akela Cooper put her through the wringer, and she is game for everything they throw at her. Madison is a mother-to-be who begins to experience in real-time the murders of a supernatural killer named Gabriel, taking revenge on those who have wronged him. That is about as deep into the story as we need to go here.

The less you know going in, the better. Cooper has laid out an interesting story here, and one that unfolds at a sometimes slow and frustrating pace, but as we fall further down the rabbit hole with Madison and her tormentor, the clearer the picture becomes, and things build to a pretty epic climax. Like all slasher films, when we get to the random killings as our heroes/victims try to figure out the mystery, it becomes a little tedious to just move from kill to kill, even as each reveals a bit more about our killer. Wan does a great job of keeping us on board, though with some absolutely gorgeous staging here, especially a great overhead shot of Madison running in terror through her house. The melting environments are also a visual standout and really help keep us in the story in a clear way.

All of it builds to the big reveal, and boy does it land hard. You may think you have this figured out right from the opening credits, but trust that you do not. You are either on board, or you will check out, but it is such a gnarly and interesting twist that you absolutely have to follow it through to the end no matter how you feel about it. It also leads to some truly epic kills and action scenes, just brutality that we haven't really seen from Wan before.

Malignant also leans into its excellent cast hard, with great success. Wallis is instantly someone you root for, as is her sister Sydney, played by Maddie Hasson. They make a great pairing, and by the end, their bond really had me rooting for both to survive. The same goes for our pair of cops played by George Young and Michole Briana White. White is especially animated and engaging whenever she is onscreen, even if both characters make some pretty dumb choices in the film. All of them do a great job from the start of the film, keeping you feeling disoriented and lost until things start to become clearer. Their disbelief matches ours until we all accept what we are seeing is reality.

All around, this is a wonderful film just to let unfold in front of you and just go along for the ride. Malignant is not perfect; the middle almost loses its way, and the CGI blood is a little much; one wishes there were a bit more practical effects deployed, but that last half hour makes it all worth it. One thing is for sure: Wan needs to stop playing with the fishes and come back home to scaring us on a more regular basis. 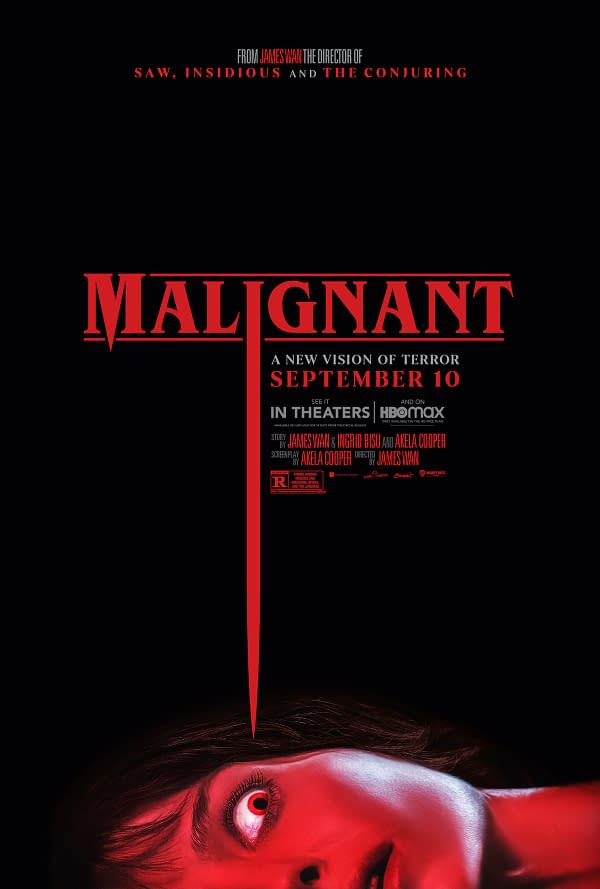 Review by Jeremy Konrad
8.5/10
Malignant is a triumphant return to horror for James Wan, that features one of the most insane final 30 minutes you will see in a film this year.

The teaser trailer for Pitch Perfect: Bumper In Berlin has been unleashed, with all six episodes set to hit Peacock on November 23rd.

What say you MOTU fans: is $550 too much to crowdfund the highly anticipated Mattel Creations Eternia playset?

Halloween Ends: Follow Jamie's Journey Before It Ends Next Week

Halloween Ends is coming in one week, so let's take a look at the franchise journey of Laurie Strode with Jamie Lee Curtis.

Check out the new, easter egg heavy poster for Super Mario Bros and wait impatiently for the trailer coming this Thursday's Nintendo Direct.

Deadman Featured On Classic Cover By Neal Adams, Up for Auction

Neal Adams Deadman goodness is taking bids at Heritage Auctions today, and it is a really great deal for CGC collectors.

The Question is a fan-favorite, and you can get one of his key books on auction today at Heritage Auctions for a great price.

Sony is reportedly bringing on director Jonás Cuarón and writer Gareth Dunnet-Alcocer for the big screen adaption of the Marvel character El Muerto.

The new Pinhead in Hulu's Hellraiser recently explained the process behind the switch-up, and how the actor effectively stepped into the role.

The director of Hocus Pocus 2 recently explained a cameo from the first film as well as its context for the franchise.

Mortal Kombat actor Mehcad Brooks says the sequel film is still in development and teases a high-powered return to the franchise.