The Batman stumbles from the moment it starts and continues to go downhill. Featuring terrible pacing, a much too long runtime, a story that seems to think it's being original while it isn't, and a combination of a score and cinematography that leads to an uncomfortable viewing experience.

The Batman is one of those rare movies where the first frame is indicative of a serious problem throughout the entire production. Despite some moments where it seems like it might do something interesting, it decides to play it safe. The movie opens with a voiceover monologue from star Robert Pattinson that sounds like Rorschach and is written by someone who fails to understand that Rorschach isn't supposed to be an aspirational or cool character. After stepping on that rake and breaking its own nose, The Batman never finds decent footing in a way that amounts to anything. This is a movie that had a very hard time making its way to the big screen, and despite all of the pieces being there to work, it just doesn't. It has a fantastic cast, a great director, and one of the best composers working right now on the score. Yet besides that cast doing the best they can with the material they are given, director Matt Reeves and composer Michael Giacchino putting out some of their worst work.

The issue from the moment we saw a single frame of The Batman was that it didn't really look like it was that original. A Batman movie that is dark? Groundbreaking. This one decides to not only rob the main character of anything that makes him interesting or fun to watch but also guts the villains as well. Batman has always had some of the best villains in comic books, period, and this movie decided that making them bland was the way to go. The Riddler is the serial killer from Se7ven; Carmine Falcone is Generic Mob Boss 1, the Penguin is Generic Mob Boss 2, Catwoman is just sort of here and not even really a villain or really even an anti-hero. All of the personality that made these characters unique to watch is stripped away to give us a more grounded version that we have seen done better in a million other movies before. There isn't a moment that any of those villains are on screen that hasn't been done better elsewhere. That's not to say any of these actors do a bad job, they all are fine to great but strip away the idiot in the cape, and you would never know this was a comic book property.

As for our hero, when Pattinson was announced as the lead of The Batman, that seemed like it could be going somewhere interesting. He is an outstanding actor, and he's an even better one when he's leaning into the weird. The best way Pattinson could be described is a "chaos goblin" who makes weird ass comments during Reddit AMA's, baffles journalists with out-of-this-world pasta recipes, and lies about dead clowns on national TV. All of that weirdness is subdued, and while this is a slightly different version of Bruce, he isn't weird enough. None of that energy that Pattinson brought to things like High Life or The Lighthouse is present here. It's just a dude in desperate need of a haircut and eyeshadow primer running around being vengeance and doing everything we have seen in a Batman movie before.

As for Reeves, it's such a shame to see such subpar work from a director who usually turns in nothing less than a B. There were three things about this movie that should have been slam dunks; good acting because there is a good cast, good directing because of Reeves, and good score because of Giacchino. However, only one of those things is present here. There are isolated shots that work, but everything is so underlit that it's hard to follow what is going on. It's apparently monsoon season in Gotham because it's always raining [but usually only at night]. If a scene isn't underlit and hard to follow, Reeves is shining light directly into the lens of the camera. It happens something like six times that a flashlight, a headlight, or something of the sort is shown right at the camera for some reason. The weird directing choices combined with even weirder choices from cinematographer Greig Fraser [who also usually hits it out of the park] makes the viewing experience not unpleasant but uncomfortable to watch. As for the score, Giacchino found about one line of music that is repeated throughout the entire movie over and over and over again. It makes all scenes feel the same no matter the tension level and adds to making everything uncomfortable.

As for the story, The Batman is a Batman movie, and that's about it. There is precisely one original story point [to my knowledge, it could be from a comic, that wouldn't be surprising]. There is about a fifteen-minute period during the end of the movie where it looks like they are going to do something completely different. However, they cop-out in the end, and what could have been something wholly original not only in Batman movies but Batman properties, in general, is bypassed for more of the same. There is another moment at the end that is also another "well that was original, not," and you're once again wondering why they decided to make this movie aside from the fact that it's Batman, and Batman usually prints money. The fanboys have been demanding that the guy running around in a bat suit because he misses his mommy and daddy to be serious. This is what we reap from that, a movie that is one cape and bat ears away from being any other vigilante movie with slightly better than expected detective work.

All of this is only worsened by the overly long runtime and strange pacing issues that make that runtime feel even longer. There is nothing wrong with a movie being nearly three hours long, and there are plenty that justifies that runtime. One might even argue that The Batman does justify that runtime because a lot is going on. However, the pacing makes every second feel like an hour, and by the time act three rolls around, you're just checked out. At least until Reeves shines another light directly into the lens to bring you back to reality and remind you that the movie is, somehow, still going.

The Batman will likely be a divisive movie for fans. As for non-fans, there isn't very much here that could really draw them out of the house to see this one in theaters. Perhaps in 45-days, those people will check this out when it hits HBO Max. As for fans, they will see this anyway, and it's going to be interesting to see who this works for and who it doesn't. For this reviewer, The Batman was a frustrating three-hour watch that left us feeling annoyed at all of the wasted potential. Perhaps someday someone will really try to do something new and interesting with Batman, but The Batman is not that movie. 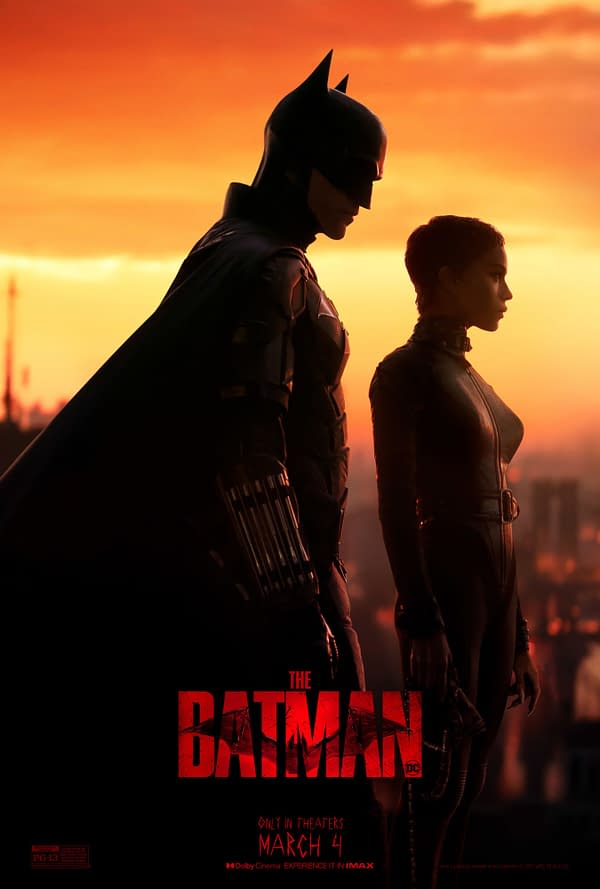 Review by Kaitlyn Booth
4.5/10
The Batman stumbles from the moment it starts and continues to go downhill. Featuring terrible pacing, a much too long runtime, a story that seems to think it's being original while it isn't, and a combination of a score and cinematography that leads to an uncomfortable viewing experience.

Mark Hamill on what is his most valuable possession from his time in Star Wars. Hint: It's probably not what you think.

Nope: Dolby Cinema Poster Is A Delight, As Tickets Go On Sale

Tickets for Jordan Peele's new movie Nope are now on sale, so check out this Dolby Cinema exclusive poster for the film.