Thriller comics tend to run counter to juvenile vibe of superhero comics, since the thriller genre tends to carry a more, I don't know, "respectable" or "adult" vibe compared to stories about men in long underwear beating each other up. But then the idea of the non-superpowered costumed vigilante was an offshoot of traditional two-fisted crime stories, since the idea of a two-fisted or gun-wielding hero who solves crimes and saves people was a fundamental mainstay of the crime and thriller genre to start with. 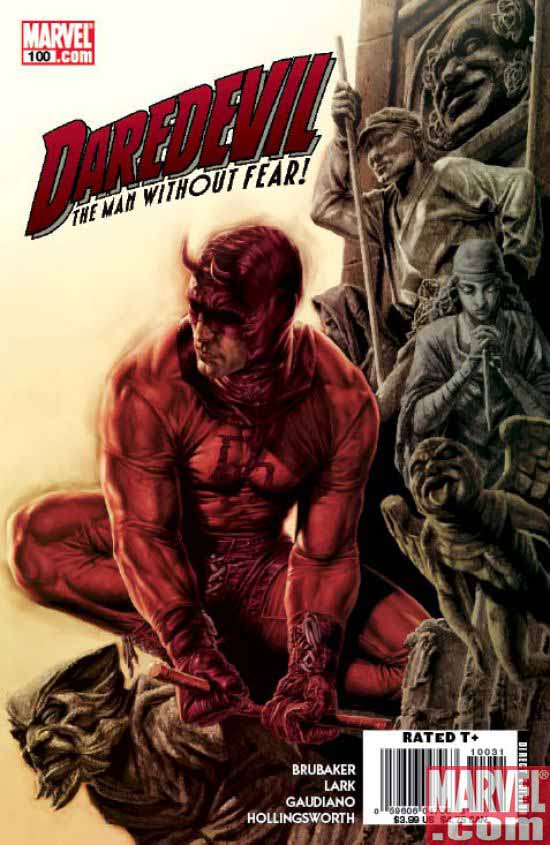 Thriller comics are in the minority in the US, despite prose thrillers taking up a big portion of the book market. Steven Grant pointed out in his column Permanent Damage that this is probably because the mainstream American comics market is superhero-driven, and the superhero genre already assimilates the crime and thriller genres into itself much of the time. Batman and Daredevil are prime examples of this.

Thriller comics, on the other hand, are huge in Europe and Japan, and each region has different aesthetic approaches: most European comics tend to be more austere and almost detached in their approach to storytelling, preferring an almost staid matter-of-factness in getting the story across, whereas in Japan, manga tends to use the cinematic tricks of editing and composition to create a more expressionistic and visceral reading experience – they want you to get inside the characters' skins and minds. And in Japan, there are thriller manga for different markets, from the teenage-oriented BLOODY MONDAY, about brainy teens fighting a criminal conspiracy, to the different adult, male-oriented series like JIRAISHIN, which is aimed at older teens and 20somethings with a darker, more punk view of the world, to the various comfort food-style police series, to the endless htiman series GOLGO 13, which is aimed at men in their 30s and 40s who are reasonably educated and keep up with international news. There are romantic comedy thrillers like Tsukasa Hojo's CITY HUNTER and its sequel ANGEL HEART that's popular with both 20something men and women, jumping between slapstick comedy, pathos and romance with ease. (and Hojo deserves a column all to himself if I ever get around to it…). The most popular thriller manga of recent times has been DEATH NOTE, which was really a procedural cat-and-mouse chase between criminal and the cops with a supernatural element added to it.

And then there's UNTIL DEATH DO US PART.

This manga series is my latest comics obsession because it's a strange example of how when there's nothing original left in stories, savvy and talented creators can throw a whole load of familiar ideas and characters together in a blender and end up with something so archetypal as to be the ultimate thriller manga.

The story goes like this: Haruka, a young girl with the ability to see the future, goes on the run from a corrupt corporation that wants to control her and chooses a blind swordsman vigilante named Hijikita Mamoru to protect her, making him promise to stick with her "until death do us part". In doing so, they find support from The Element Network, the secret organization founded by victims of crime and terrorism to support vigilante teams for protecting the innocent, and The Wall, an international covert ops network. The corporation that wants Huruka is part-funded by international terrorist Edge Turus for his own ends, and he uses his ties to the Yakuza in Tokyo to hunt her and Hijikita down, underestimating them and their allies all the way.

Tell me if that summary doesn't sound absolutely hoary. By rights, this comic should be utterly ridiculous and bloody awful – the title itself is too long and layered with strange ironies and abstract pretensions the way prose thriller titles often do — but it's quite the opposite. It's possibly the best serialized thriller series I've read in years. Writer Hiroshi Takashige (about whom little seems to be known other than his previous series SPRIGGAN) and artist DOUBLE-S seem intent on creating the ultimate thriller comic, and what fascinates me is how they manage to keep the plot strands and cliffhangers going consistently since 2005. This is the kind of compulsive serilaised thriller we all want to read in our Marvel and DC comics, and here we have manga schooling everyone again. What's especially interesting to me is how it feels like a compendium of superhero tropes found in Marvel and DC comics filtered through a Japanese lens. The characters in the series are pretty much superheroes and villains without the naff costumes. Hijikita is an amalgam of Batman (he has a tech specialist backing up his special blade and experimental glasses), Daredevil (he uses his senses and athleticism to fight bad guys) and Zatoichi (the quintessential blind swordsman of popular culture). His pairing with Haruka recalls the father-child warrior partnership of LONE WOLF AND CUB. The Wall, with its specialized operatives and grizzled leader Alpha, are reminiscent of SHIELD and Nick Fury – in fact, some scanlators think his real name name is a Japanese take on "Jack Kirby". Turus and his network of gangsters, criminals, hitman and mercenaries, is the kind of vast criminal conspiracy you find in Marvel and DC. There's an interesting feel of both American and Japanese comics being combined in UNTIL DEATH DO US PART. Takashige appears to have done a huge amount of research not just in comics and the thriller genre, but in politics and urban warfare as well to lend the pulp some weight. History, current affairs and science books are big sellers in Japan and manga writers frequently read nonfiction to fuel their plots.

It's all crazed adventure bollocks, but it's fun and addictive crazed adventure bollocks. The tone of the series is kept at PG-13 so there's no nudity or porn. The heroes are stoical and complex and the bad guys are gleefully black-hearted. All the characters are clearly defined, down to the supporting characters. Everyone has enough dimensions as to be unpredictable. There's Sierra, the Wall's gunsmith and markswoman who wants to adopt Haruka to ease the pain of her own daughter's death. There's Juliet, the Wall's top undercover op and femme fatale, who enjoys manipulating both men and women to discover their weaknesses. There's Tatsumi Dalba, the sofrware billionaire who founded and runs the Element network, who was orphaned at a young age and vowed to find a way to protect innocents (another Bruce Wayne Manqué). There's Teppei Genda, the hotshot cop on Hiikita's trail, waiting for him to commit a crime, to kill a perp, so he can bust him, and who slowly finds the big picture unfolding before his eyes. There's Aegis, a former bomb disposal expert and fighter who's now a bodyguard and agent of the Element network. There's Turus, whose sadism is ignited by his obsessive hatred of Hijikita for foiling his plans and maiming him as punishment. There's Fang, the assassin who delights in finding a worthy adversary in Hijikita and wants to discover his weakness. There's Wiseman, an American academic and criminologist whose true calling is to be a freelance master strategist for criminals, a 21st Century Napoleon of Crime.

This is just a small list of the characters in the series, and with all these high-concept characters, the creators still manage to convey the sense that Hijikita is still the scariest and most unpredictable bad-ass of the lot. And they also show that none of comes easily to him. He's blind, after all, and has to judge every move, every decision he makes since one slip would be his last. Takeshige and DOUBLE-S have spent five years upping the stakes in his fights, coming up with scenarios you never thought you wanted to see in a blind swordman series – will Hijikita triump against a building full of yakuza all armed with pistols and and machine guns? What about when he's facing off against prototype military drones that are invisible to radar, including his own? How does her fare against a speeding, radio-controlled car with an injured hostage tied to the front, preventing him from slicing up the engine block up to stop it? Or when he takes it upon himself to fight every mercenary that wants the $10 million bounty on his head in a single night in a park in central Tokyo? Have you ever wanted to see a blind swordsman take on a tank – and his blade is broken so he only has a reach of barely a few feet? And he always wins, the same way Batman always wins. And Haruka isn't a submissive little girl but a proactive heroine on her own – the whole series is kicked off by her running up to Hijikita, a complete stranger, for help in the opening pages because she literally foresaw her future with him in that one instant when she decided to run from her captors. In one episode, she even saves a mafia princess classmate from gunmen by using her precognitive sight and the evasion skills Hijikita taught her to out-think them. 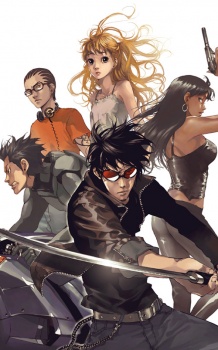 UNTIL DEATH DO US PART is like a masterclass in adventure serial plotting. The creators have a grasp of story, theme, plot-twists, escalating peril and complications with an ineffable sense of cool in a way Hollywood and American comics have become tired and lazy in. And in an age when everyone is looking for that hot new thing, trying to pitch what they hope is the next big franchise, we have this series quietly being published in Japan for five years now, in monthly chapters of over 20 pages each the same way US superhero comics are serialized, albeit in an thick anthology with other series. Its 11 volumes (and still going) are collected and published by Square Enix, the company that owns and produces the FINAL FANTASY game franchise. Too bad it doesn't look like anyone is going to translate it properly for publication in English.

Collecting for Superheroes Without Spandex at lookitmoves@gmail.com

The covers and artwork from Until Death Do Us Part are copyright Square Enix.