Welcome back Bat-fans as we take a walk down Batman memory lane and rewatch Batman: The Animated Series for its 30th anniversary!  Today we're going to dive back into the story that began with our very first episode and conclude that first Catwoman adventure with The Cat and the Claw Part II.

The official synopsis for the episode: "When Catwoman infiltrates the underground headquarters of the terrorists, both she and Batman are captured and left to die as victims of a viral plague."

While this was the 16th overall episode produced, it was the eighth to air, even though Part I (the 15th produced episode) was the first episode to air.  The order jumbling was a call by the Fox network, as they wanted to capitalize on the success of Batman Returns, which had hit theaters just two months prior and featured Catwoman, and thus the call was made to debut the series with a Catwoman episode.

The decision to swap the planned debut episode (On Leather Wings) with one further down the line lead to a rush to finish both parts of The Cat and the Claw.  This resulted in a product that series creator Bruce Timm was very unhappy with, as he deemed the animation in the episodes to be inadequate and not up to his lofty standards.

So if you'll recall in Part I, the plot revolves around Catwoman trying to stop a corporation named Multigon from building atop a mountain lion sanctuary and learning that the head of Multigon is in cahoots with a terrorist named Red Claw, who plans on crashing a train carrying bioweapons in Gotham.

Part II opens with Batman interrogating an informant in a Gotham park, who informs him about the train heist.  Batman then goes over the information with Commissioner Gordon, where they figure out that it's a secret military train on an unscheduled trip.  Meanwhile, Red Claw and her team attack the train.

Batman swoops in on a hang-glider to stop them.  He fights the terrorists on top of the train, while Red Claw gets ahold of the bioweapon and escapes by helicopter.

As Gordon argues with a General on the phone about what happened, Batman contacts him and finds out Red Claw has set a ransom.  At the same time as Bruce Wayne, he's meeting Selina Kyle for a date.  As Bruce drives them to their date, some goons start ramming his car from behind, as they're trying to kill Selina.  Bruce is able to outdrive them and force them to crash off of a bridge into the river below.  Bruce then brings Selina home to make sure she's safe.

Bruce and Selina change into Batman and Catwoman, respectively, but in the Bat Cave, Alfred finds an unusual cat hair on Bruce's jacket, which alerts something in Batman's mind.

Meanwhile, Selina's assistant Maven is attacked by a goon of Red Claw's in Selina's apartment, but Batman arrives in time to stop the guy and rescue her.  Batman tells Maven he knows Selina is Catwoman and needs to know where she's gone so he can help her?  Maven reveals Catwoman went to the Multigon site and as Batman heads out, she tells him Selina is in love with him.

At the site, Catwoman takes out a goon and leaves him to a mountain lion as she infiltrates the underground lair, just as we see the Batwing arriving overhead.

Catwoman photographs all of their operations, but as two goons get the drop on her, Batman arrives and takes them out.  He grabs Catwoman and as they try to make their escape, they're trapped by Red Claw and her men.  They're tied up and Red Claw leaves the bioweapon next to them, dropping a bit of acid onto it so it will eat through the container and expose them to the plague in a matter of minutes.

Red Claw and her team make their escape, but as they leave, Catwoman uses her claws to cut the ropes and free them.  Batman convinces Catwoman to make her escape while he stays back to destroy the bioweapon.  He hoses the room down in fuel and drives out of the lair in the fuel truck, throwing a grenade back as he leaves, blowing it all up behind him.

Commissioner Gordon and a fleet of GCPD helicopters arrive at the scene, just as Red Claw attacks Catwoman and tries to kill her on a nearby cliff.  A mountain lion attacks Red Claw to save her, as Batman watches Catwoman make her escape.  He informs Gordon that the weapon was destroyed and he follows Catwoman to her apartment.

He tells her that Maven is safe and that the terrorists after them are taken care of.  She asks if he's told the police that he found the cat burglar he's after, but he says not yet because he didn't want her taken away like a common criminal.  "So you do care?"  As Catwoman leans in to kiss him, Batman locks a pair of handcuffs on her.  "More than you'll ever know."

And that's that for The Cat and the Claw Part II.  Neither part of this story was peak B: TAS and at times in this episode, it felt more like something from an Indiana Jones film than Batman.  It wasn't bad though and had some fun stuff, even if it wasn't the most thrilling or deep offering of the first season.

This episode along with the entire series is available on HBO Max in full HD. Next time, we go back to the beginning as we will meet the series' version of Poison Ivy for the first time in Pretty Poison. See you next time Bat-fans!

Batman: The Animated Series Season 1 Episode 8 "The Cat and the Claw Part II" 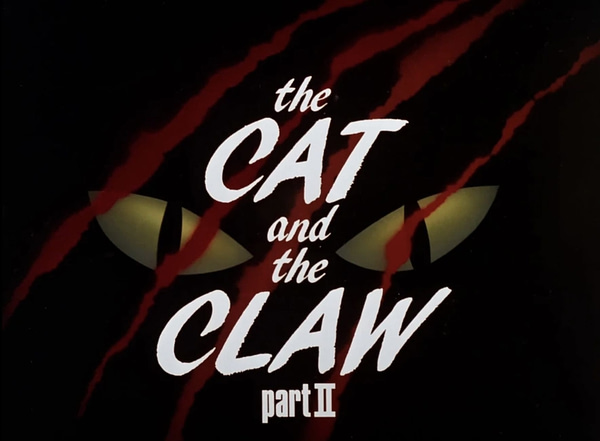 Review by Ryan Fassett
7/10
Like Part I before it, The Cat and the Claw Part II isn't one of the more memorable episodes of the first season of Batman: The Animated Series. But it is still a fun enough and action-packed adventure that makes up for its lack of depth with some fun action.
Credits
Director
Dick Sebastian
Story
Sean Catherine Derek and Laren Bright
Teleplay
Jules Dennis and Richard Mueller
Music
Harvey Cohen

Will Sasha Banks and Naomi make their WWE return to be a part of the WWE Women's Tag Team Title Tournament beginning Monday?

WWE SmackDown: Another Talent Made Their Big WWE Return Tonight

WWE SmackDown on FOX ended in an exciting way tonight with the shocking return of a big released former Champion.

Our recap of last night's episode of NXT 2.0 on USA, where a new team was crowned the NXT Women's Tag Team Champions after a Four-Way Match.

The Jetsons: George Jetson Was Born Today- Anyone Feeling Old Yet?

Happy Birthday George Jetson! The star of the classic Hanna-Barbera cartoon The Jetsons was series-canon-born today. Let THAT one sink in...

Superman: Why Haven't We Had a New Man of Steel Animated Series Yet?

With 20+ years passed since Superman had his own animated series, it's time to take a look at why that needs to change in a big way.

The Lord of the Rings: TROP Promo: Middle-Earth's Fate Rests With Them

In the following new teaser for Amazon's The Lord of the Rings: The Rings of Power, Sauron's return endangers all of Middle-earth.

In the promo for the finale of AMC's Better Call Saul, Gene has a desperate need for a "vacuum"; Bob Odenkirk's three-word series finale clue.

Seth MacFarlane discusses how The Orville developed into a sci-fi series franchise and how 1997's "Contact" helped inspire its creation.

The Sandman Star Considered Adapt of Grant Morrison's "The Invisibles"

The Sandman star John Cameron Mitchell would like to adapt Grant Morrison's The Invisibles to series, and he once considered pursuing it.

Only Murders In The Building Season 2 Episode 8: Playing With Darkness

Darkness invades the Arconia, and not even Oliver's dip is safe in Hulu's Only Murders in the Building S02E08 "Hello Darkness."