In this episode of Demon Slayer: Kimetsu No Yaiba's Mugen Train Arc "Should Have Been", we get some insight into our heroes' deepest fantasies. They keep falling deeper into the slumber induced by Enmu, the Lower Moon demon that has been haunting Mugen Train. Tanjiro, Zenitsu, Inosuke, and Nezuko have joined Kyojuro aboard to investigate all the rumored disappearances. Well, turns out they fall immediately. Our first hint should have been the ending of the previous episode while they surround Kyojuro calling him big bro. However, how precious is it that that was Kyojuro's dream?

Enmu has tricked kids into doing his bidding and has set them out to enter their dreams and destroy their cores. Apparently, there is an edge to the dreamscape, once that barrier is torn you can slip into the person's unconsciousness and there you will find their core. Once the kids destroy it the person is set to be crippled and easy prey after. Anyway, our heroes have fallen into Enmu's trap and they are all deep in slumber living their biggest dreams while being oblivious to the danger they are in.

Tanjiro finds himself back home with his family, however, the inkling that something is wrong continues to chase him throughout until he faces himself and realizes he is dreaming. It was a pretty tear-jerking scene where he has to face his family and the realization that things cannot go back to how they were; the acceptance of death and the knowledge that the sorrow will never really fade. However, I think it gave us some closure to see him finally see his family again, apologize, and say goodbye. It was also pretty intriguing to see his father, I wonder if that is a manifestation of his consciousness or his spirit getting through Tanjiro. Though it is really Nezuko the one who woke up Tanjiro's subconsciousness, or rather his senses by bleeding out. That said, what he has to do to wake up is pretty rough, and I wonder if it will ever cease to make me go cold.

On his end Zenitsu finds himself living the life with Nezuko; and Inosuke is leading a team of underlings made of Tanjiro, Zenitsu, and Nezuko. While I love best boi Tanjiro, Inosuke always gets to me, his tsundere traits will forever make him a favorite. However, Kyojuro's dream seems was not really far from his reality. It is heartwrenching how the sweetest and most passionate character maintains his flame despite his own father trying to put it off. Once again, I believe seeing Demon Slayer: Kimetsu No Yaiba's Mugen Train Arc in episode format is a different experience than watching it as a film. I think it helps the storyline and adds to the build-up.

Demon Slayer: Kimetsu No Yaiba Mugen Train Arc "Should Have Been" 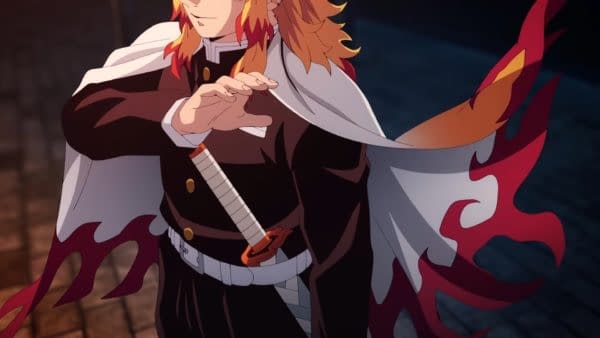 Review by Alejandra Bodden
8.5/10
In this episode of Demon Slayer: Kimetsu No Yaiba's Mugen Train Arc "Should Have Been", we get some insight into our heroes' deepest fantasies. They keep falling deeper into the slumber induced by Enmu, the Lower Moon demon that has been haunting Mugen Train.

The last episode of Demon Slayer: Kimetsu No Yaiba Mugen Train Arc "Set Your Heart Ablaze" is as visually beautiful as it is heartbreaking.

Demon Slayer: Kimetsu No Yaiba Mugen Train Arc E06 "Akaza" was a wonderful shonen treat where the Mugen Train wasn't the only danger.

In the fifth episode of Demon Slayer: Kimetsu No Yaiba Mugen Train Arc "Move Forward!," it was time to see our slayers in action.

Demon Slayer: Kimetsu No Yaiba Mugen Train Arc "Insult" was a testament to Tanjiro's willpower and had the most triggering moment so far.

What We Do in the Shadows S03 Finale "The Portrait" Review: Moving On

FX's What We Do in the Shadows wrapped up Season 3 with the stellar episode "The Portrait," leaving a ton of twists-n-turns in its wake.