After the successful relaunch of NXT 2.0 as a ratings Juggernaut, The Chadster went into this week's episode of AEW Dynamite with high hopes that WWE was beginning to turn things around in the ratings wars. With all that's happened recently, you might think that Tony Khan would show some respect for Vince McMahon and the wrestling business and tone down Dynamite, and based on the card going into the show, it seemed like that might happen. But though on paper it seemed like a potential filler episode, instead AEW delivered one of the best episodes ever. Auughh! So unfair!

The Chadster could already tell this was going to be a very disrespectful episode of AEW Dynamite when CM Punk came out to start the show and joined the commentary table. The first match was Adam Cole vs. Frankie Kazarian, and though Kazarian put up a decent fight, that traitor Cole eventually got the win with a Panama Sunrise and Last Shot. The match put Cole over but also showed off a little bit of what he can do in the ring, which was total overkill and really just rubbed it in the noses of WWE fans like The Chadster who are still sore over Cole leaving The Chadster's beloved NXT.

Cole cut a promo after the match calling out Christian Cage, Jungle Boy, and Luchasaurus and challenging them to a match against Cole and The Young Bucks at Rampage Grand Slam next week. Promoting a match four shows in advance! That's totally unfair to WWE who can barely deliver the matches they book hours before the show! Auggh!

Backstage, Fuego del Sol showed off his new car and offered to put it on the line for another shot at the TNT Championship on Rampage. People complain about WWE doing things like taking away wrestlers' Twitter accounts, but at least Vince McMahon has never made a wrestler put their car up as collateral for a match! But The Chadster doesn't hear anyone calling out AEW over that. Hypocrites!

MJF came out next and made a bunch of honestly fair points about New Jersey. Then he had a fake conversation with Brian Pillman in hell and called Brian Pillman Jr.'s mom a meth whore. Pillman Jr. came out with a chair and chased them off.

In a pre-recorded interview with Jim Ross, JR told Pillman he let his dad and everyone down last week and he better kick MJF's butt at Grand Slam next week to redeem himself. What's with all the portion for upcoming matches? What if Tony Khan wants to rip up the script right before Grand Slam? This just goes to show how little he knows about wrestling.

Jurassic Express and Christian Cage accepted the challenge from Adam Cole and Christian made fun of NXT. The Chadster was nearly brought to tears by this.

Next, FTR beat Dante Martin and Matt Sydal by hitting Martin with Big Rig. Pushing FTR is hugely disrespectful to WWE and The Chadster doesn't care for it one bit.

CM Punk and commentary talked about the Suzuki Incident, which was a meme on social media last week when AEW didn't play Minoru Suzuki's full entrance theme. If Tony Khan knew anything about wrestling, what he would do is punish Suzuki for getting over on social media without AEW, but he doesn't, so instead he made it part of a storyline as Lance Archer and Suzuki challenged Jon Moxley and Eddie Kingston to a match at Grand Slam next week. So unfair!

Malakai Black came out and noticed that movie star Rosario Dawson was in the crowd. Black called her out, but Dawson came out of the crowd and jumped on his back. As Black Struggled, Dawson's Go Big Show co-host Cody Rhodes came through the crowd and attacked Black. They brawled into the crowd until commercials, never to be seen again. Getting a celebrity like Rosario Dawson involved in an angle like this is extremely unfair to AEW. AEW is just copying what WWE did with Bad Bunny and probably Dawson will win the TNT Championship next week. So disrespectful.

Backstage, The Bunny cut a promo on Anna Jay. Then Anna Jay tried to cut a promo in return, but Evil Uno interrupted her and the Dark Order argued with each other. The Chadster can't stand to see continuity like this with people on the lower card in AEW. It's not the way wrestling is supposed to work. AEW needs a 24/7 title to have The Dark Order chase after every week so they don't have to disrespectfully be involved in long-running, multi-faceted storylines like this.

Dan Lambert came out to give his very fair criticisms of AEW again, but Chris Jericho interrupted with Jake Hager. Jericho made a frankly homophobic joke about American Top Team, but he probably won't get in trouble because AEW has "good will" instead of decades of poor behavior in terms of homophobia, sexism, and racism like WWE, which is totally unfair. They haven't been around that long! Jericho and Hager will face The Men of the Year next week at Grand Slam.

Billy Gunn cut a promo backstage about how he and the Gunn Club are undefeated in AEW and deserve more shots.

Leyla Hirsche gave Jade Cargill her toughest match in AEW yet, but Cargill beat her with her finisher in the end. Once again, AEW makes both wrestlers in a match look good while still providing a clear, clean finish. It's totally disrespectful to WWE.

Andrade El Idolo cut a promo backstage about how he can beat anyone at any time and didn't need Chavo Guererro's help. Commentary confirmed Guerrero is done as El Idolo's manager. Well, don't try to come crawling back to WWE, Chavo. You chose your side.

Taz and Hook came to the commentary to draw out CM Punk, who was attacked from behind by Powerhouse Hobbs. Hobbs tried to put Punk through the announce table, but it wasn't obviously built to collapse like WWE's, so it didn't break. Ha!

Shawn Spears and Darby Allin fought, and Allin came out on top. During the match, Spears grabbed a towel and wiped the face paint of Allin in a show of disrespect. After the match, FTR came out to help jump Darby Allin and Sting, and Tully Blanchard did the same thing, wiping off Sting's face paint. It's the first time Sting has looked truly vulnerable in AEW. The Chadster absolutely hates the way AEW uses legends like Sting and Tully, at the same treating them with the respect they deserve but not using them to squash and diminish young talent. Tony Khan really does still have a lot to learn about the wrestling business, doesn't he?

Tony Schiavone interviewed Bryan Danielson in the ring. Kenny Omega and Don Callis interrupted. Danielson played on Kenny's ego to get him to accept a match at Grand Slam, apparently non-title, to prove who the best wrestler is. Fools. Everyone knows Roman Reigns is the best wrestler.

Miro accepted Fuego del Sol's challenge from earlier in the night. Matt Hardy promoted his agenda to shave Orange Cassidy's head and turn him into "an orange egghead."

Jon Moxley and Eddie Kingston came out and beat 2.0. Moxley clearly outclassed 2.0, but they weren't completely squashed. After the match, Minoru Suzuki and Lance Archer came out and battled around ringside and in the crowd until Dynamite went off the air, leaving the crowd wanting more. Which is totally unfair.

This episode of AEW Dynamite felt like a personal attack on The Chadster. Why can't Tony Khan cut The Chadster a break and put out a lackluster episode once in a while? The Chadster hasn't been able to have sex with his wife since NXT lost the Wednesday Night Wars, and that's not going to change anytime soon as long as AEW keeps putting out episodes of Dynamite like this one. Please, Tony Khan. You've ruined The Chadster's life enough. Just stop! 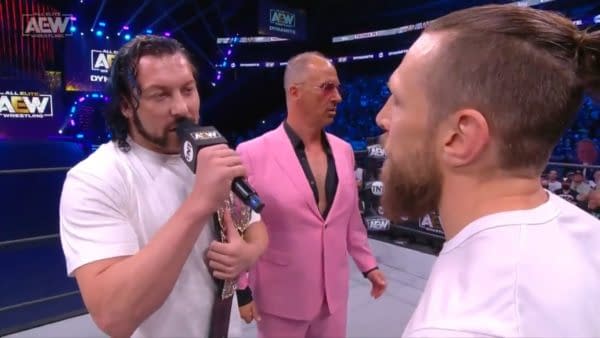 Review by Chad McMahon
8.5/10
This episode of AEW Dynamite felt like a personal attack on The Chadster. Why can't Tony Khan cut The Chadster a break and put out a lackluster episode once in a while? The Chadster hasn't been able to have sex with his wife since NXT lost the Wednesday Night Wars, and that's not going to change anytime soon as long as AEW keeps putting out episodes of Dynamite like this one. Please, Tony Khan. You've ruined The Chadster's life enough. Just stop!