Howdy, folks. The Chadster here, still assigned to cover AEW Dynamite by Bleeding Cool in what The Chadster can only assume is some kind of punishment. This week's episode of Dynamite was a special event called Road Rager and took place in Miami, as AEW has officially left their pandemic home, Daily's Place in Jacksonville, to kick off a post-pandemic tour. But did Road Rager go too far in its disrespect and unfairness toward WWE? The Chadster has your review right here.

After an emotional opening showing the live crowd that was very unfair because WWE should have been allowed to go back on tour first, Road Rager kicked off with a South Beach Strap Match between Cody Rhodes and QT Marshall. The Nightmare Family Wolfpac tried to interfere, but Dustin Rhodes evened the odds and won after giving Marshall the Crossroads three times. The Chadster feels this match was extra disrespectful because it used the "touch every turnbuckle" method of winning the match, upstaging WWE with a commitment to tradition.

Cody is FIRED UP in the #SouthBeach Strap Match!

Tony Schiavone interviewed Kenny Omega and Don Callis, which led to the Dark Order coming out again like last week. This week though, Omega and The Good Brothers attacked, and Hangman Page came out to make the save, taking out the Good Brothers and facing off with Omega, who retreated. Personally, The Chadster is totally okay with competition, but it has to be on a level playing field. When WWE's storylines can't maintain continuity for a month, while AEW's go on for longer than a year, that's just not fair and is another example of why Tony Khan is a jerk. The Chadster is sorry to use that kind of language, but it was warranted here.

Jim Ross interviewed Ethan Page and Darby Allin about their upcoming coffin match, and then JR called it the first-ever coffin match in a clear dig at WWE and The Undertaker. The Chadster spit his White Claw Seltzer out all over the TV when he heard this. So disrespectful.

The Pinnacle's FTR and Wardlow beat the Inner Circle's Proud and Powerful and Jake Hager in a six-man tag match. The Chadster doesn't know where AEW gets off having a six-man tag match actually further a feud instead of stalling for time on a random episode of Monday Night Raw, but they should stop it. After the match, Tully Blanchard took out Konnan with a chop block.

BIG RIG by #FTR to give #ThePinnacle the win over #TheInnerCircle…with a little help from Tully Blanchard.

Chris Jericho and MJF had their face-to-face meeting in which Jericho agreed to go through our trials before he gets to face MJF. Jericho will have to win all of the matches in a row to get a shot at MJF. When Jericho made his entrance, The Chadster was almost too busy being angry about AEW having a crowd sing along to Jericho's theme song rather than replacing the theme song with a generic rap-rock number to notice a fan tried to enter the ring and got shut down by security and Jericho. The Chadster can only say this: stop texting The Chadster. That wasn't me!

In a very unfair promo, Britt Baker blamed Tony Khan for Reba's injury last week and then made a "blood money" reference to WWE and Saudi Arabia. The Chadster tries to like Britt Baker because she dates someone who works for WWE, but that comment was really out of line and has no place in sports entertainment. Yes, WWE wrestlers sometimes take shots at AEW, like when Shotzi Blackheart made fun of the ending of Blood and Guts, but that's totally different because she works for WWE. The Chadster found this whole thing very distasteful and hopes Adam Cole breaks up with Baker because of it.

Andrade El Idolo beat Matt Sydal in his first AEW match. You readers all know The Chadsters feelings on AEW taking former WWE wrestlers and booking them stronger than WWE did. It's not fair, it's disrespectful, and it's another example of how Tony Khan goes out of his way to personally make The Chadster's life miserable. Charlotte Flair should really break up with Andrade for this one.

Arn Anderson was about to cut a promo when the lights went out and the former Aleister Black, now going by Malachi Black, took out Arn with Black Mass and then took out Cody Rhodes when Rhodes tried to intervene. Now, if The Chadster was booking Dynamite, he would have probably had Black sit in a dark room doing nothing for six months, but Tony Khan doesn't have the booking skills The Chadster does because he's a hack. This was another unfair segment and The Chadster hopes Zelina Vega breaks up with Black over it.

Ricky Starks threatened to have sex with Brian Cage's wife, Melissa Santos, in a promo for their match next week. This obviously got Cage very upset, but The Chadster is intrigued. The Chadster loves a good cuck angle and is really interested in this cuck stuff because it makes great television. So this was actually an alright segment.

Things are personal now between @starkmanjones and #FTW Champion @MrGMSI_BCage. They clash at #AEW #FyterFest Night 1 next Wednesday (7/14) , LIVE on @tntdrama at 8/7c. pic.twitter.com/ZYvD1vIlXB

Orange Cassidy and Kris Statlander beat The Bunny and The Blade in a mixed tag match that, in the Chadster's opinion, featured a little too much intergender stuff. That kind of stuff is okay when it's trained professionals like Nia Jax and Reginald doing it, but these amateurs need to be careful.

Quick thinking by Kris Statlander to get the win!

Dan Lambert of MMA's American Top Team, who was in the crowd with Amande Nunes and Jorge Masvidal (which was very disrespectful) cut a promo on the crowd about how much AEW sucks, and The Chadster has to say, Lambert made a bunch of good points. Of course, just like AEW fans on the internet, Lance Archer didn't have a good comeback so he just came out and gave Lambert the Blackout instead. The Chadster hated that, and felt it would have been much better if Tony Khan came out and took this constructive criticism from Lambert and promised to make the show better instead.

In the Road Rager main event, The Young Bucks beat Penta El Zero Miedo and Eddie Kingston in a street fight that involved a ton of interference by The Elite and Frankie Kazarian and tons of weapons including thumbtacks. It was a crowd-pleasing, action-packed main event which The Chadster found totally unfair in the way it capped off an exciting two hours of television. AEW needs to learn how to pace things much more slowly or they run the risk of getting fans too excited, which will then just make them expect more excitement in the future. That's bad long term planning, which The Chadster guesses isn't unexpected from Tony Khan.

Overall, The Chadster hated this episode of AEW Dynamite for all the ways it made AEW seem like a more fun show to watch than WWE Raw or Smackdown. Sooner or later, Tony Khan is going to have to learn to respect his elders because wrestling fans aren't going to put up with this disrespect toward WWE forever. 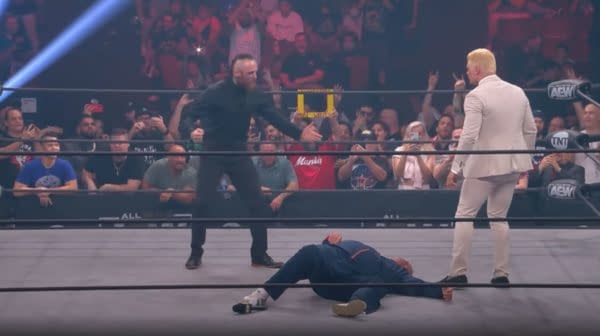 Review by Chad McMahon
8/10
Overall, The Chadster hated this episode of AEW Dynamite for all the ways it made AEW seem like a more fun show to watch than WWE Raw or Smackdown. Sooner or later, Tony Khan is going to have to learn to respect his elders because wrestling fans aren't going to put up with this disrespect toward WWE forever.

Everything The Chadster Hated About AEW Dynamite Grand Slam

AEW Dynamite Grand Slam brought The Chadster to tears by delivering one of the best wrestling shows of all time. Auughh! So unfair!

Football Continues to Unfairly Bully WWE in Ratings; Be a Star, NFL

Thanks to Roman Reigns, WWE Raw saw a jump in viewership and ratings this week, but with the NFL colluding with Tony Khan, will it be enough to beat AEW Grand Slam?

Cats and kittens, we have a date for Tiger King 2 this fall on Netflix, mark your calendars for November 17th.

Netflix's The Witcher has been renewed for Season 3 as well as a number of new projects. Plus, new previews of what's to come for Season 2.

Arcane: League Of Legends Netflix Series Gets A Trailer & A Date

November 6th couldn't arrive any quicker, Netflix has released the date and a trailer for the Arcane: League of Legends Animated Series.