¡Hola, mi amigos! It is I, your El Presidente, the greatest authoritarian dictator the world has ever seen and if I do say so myself, a fine reviewer of the best trashy reality television. Today, comrades, it is my mission to tell you about all the drama that happened on this week's episode of MTV's Floribama Shore. But sadly, Floribama Shore Season 4 Episode 22 "Yardi Gras" was little more than the proverbial cock tease, which is a kind of game we play in my country where we bully somebody with a rooster.

The teaser for this episode that played during the last episode focused on a visit from Kirk's friends from Atlanta, and in particular two women, both named Tori, who were basically put on this Earth to have sex with Gus. Unfortunately, the teaser for next week's episode… also focused on that. But before we get to that, here's what did happen.

As the roommates (sans Nilsa) wrapped up their camping trip, Gus and Jeremiah were paired for a game of egg toss, which they won. And when the roommates organized a game where everyone goes around in a circle and says something nice about the other roommates, Gus complimented Jeremiah's discipline, while Jeremiah complimented Gus's hair, which is funny, because that's the same thing Putin chose to compliment about Donald Trump at the latest annual dictators retreat. And comrades… he didn't really mean it either! Haw haw haw haw! Jeremiah will never forgive Gus!

After that, Kirk randomly wondered if the group had missed Mardi Gras, which they had, so he invited his friends to visit the house from Atlanta, which was totally on the spot because it's not like they probably had to quarantine for two weeks before visiting the house or anything. Three of Kirk's friends visited, but the only ones that concern us here are Blond Tori and Brunette Tori, both of whom had major crushes on Gus.

Gus spent most of the episode talking about how he would definitely not cheat with the two Tori's because he loves his girlfriend at home, which is definitely the kind of thing someone who isn't going to cheat on their girlfriend would say. Gus's resolve was so strong that he had no problem getting in the hot tub with both Torries, despite his infected toe. But this is the COVID era of MTV reality shows, which means a single day must be stretched to at least three episodes. As a result, Yardi Gras ended early, without Gus cheating on his girlfriend, and with the teaser for next week's episode promising it again.

It's hard to blame MTV or los producers for this when the fact is that most of the appeal of these shows is seeing the drunken, classless partiers interact with normals in the real world. Unfortunately, the COVID-19 pandemic prevents that from happening, so instead MTV films these weird isolation seasons and then struggles to make the drama stretch for an entire half-season. Don't get me wrong, comrades. This Gus storyline shows promise. But the pacing is all off.

Until next time: socialism or death! 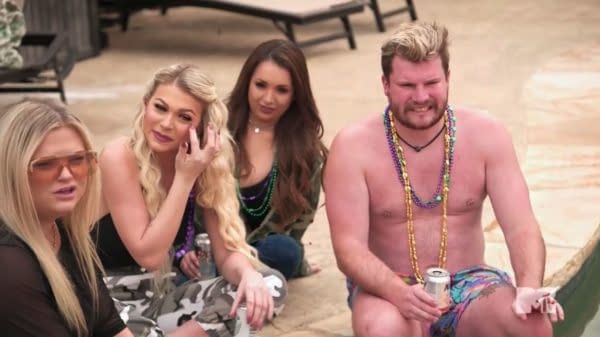 Review by El Presidente
4/10
It's hard to blame MTV or the producers for this when the fact is that most of the appeal of these shows is seeing the drunken, classless partiers interact with normals in the real world. Unfortunately, the COVID-19 pandemic prevents that from happening, so instead MTV films these weird isolation seasons (as with Floribama Shore) and then struggles to make the drama stretch for an entire half-season.

Seth Rollins said he'll bring the Universal Championship to Raw if he beats Roman Reigns at the Royal Rumble. That's a big if. Plus: what happened at Otis's graduation ceremony?