Floribama Shore Season 4 Episode 16 continued the roommates' attempts to have a vacation that doesn't end in a COVID outbreak and quarantine. In this week's episode, best friends Nilsa & Aimee were torn apart over a poop-eating dog, but is there something else going on in Aimee's life? Greetings, comrades! It is I, your El Presidente, here to recap and review the latest episode of the second half of Season 4 of Floribama Shore, titled "Pig Poop and Rally."

As you may recall, comrades, the previous episode ended on a cliffhanger with Gus crashing his ATV and flipping over multiple times. But you may also recall that last week's preview for this episode showed Gus hanging out after the crash, perfectly fine. That's because he's fine, comrades. He walked away laughing from the crash with nothing worse than a tear in the back of his jeans, which, according to Gus, leaves him with just two pairs of pants for the rest of the season.

How does MTV always find the good pizza?

That brings me to another topic you may have been concerned about: where will Nilsa find a decent place to order pizza in Georgia? Well, worry not, because Nilsa did locate a place and ordered about fifteen pies. And comrades, those pies looked good! It always amazes me how the cast of Jersey Shore and Floribama Shore somehow always manage to find good New York-style pizza no matter where they're filming, when I can never seem to find a decent place outside of New York and its surrounding area! I got so desperate I recently ordered my palace guard to kidnap a pizzeria owner from New Jersey and bring him here to be my personal pizza chef. Yes, he was all like, "please, Your Excellency, just let me see my family," but I told him I would have his family kidnapped and brought to the palace as soon as he makes me an acceptable pepperoni pie with extra cheese! Until then, a few weeks alone in the dungeons should provide the proper motivation. Haw haw haw haw!

As my good friend, Jay Z once said, "I got 99 problems, but my dog eating a pig's crap ain't one." Unfortunately, Nilsa cannot say the same, because Aimee's pet pig, Snowflake, keeps pooping all over the yard, and Nilsa's pet dog, Ravioli, keeps mistaking the turds for delicious treats and eating them. Comrades, this led to some tension between the roommates, as anger flared between Nilsa and Aimee over whether Aimee should pick up the pig poop, or whether Nilsa should train her dog not to eat it, or whether they should just be kept in separate areas. This led to PGP spending the rest of the episode penned up in the living room, but the ladies did eventually resolve their differences by calling a pet behavior specialist and making an appointment for counseling for the animals.

Comrades, we had almost the exact same problem at the Dictators' Summer Retreat back in '05. It was me, Putin, Alexander Lukashenko, Erdoğan, Muammar Gaddafi, and Kim Jong Un. Erdoğan had this wolf he kept as a pet, and the wolf kept crapping all over the cabin, and then Putin's pet bear would eat it. Well, Putin couldn't stand people thinking that he owned a poop-eating bear, so he had the KGB arrest the wolf, kill it, cook it up in a stew, and serve it to Erdoğan the next night at dinner. Then Putin was all like, 'How do you like the meat, comrade? Does it make you want to howl?" Haw haw haw haw! Putin is so funny. Anyway, Nilsa and Aimee probably dealt with the situation better, if I'm being honest, but don't tell Putin I said that.

The episode ended on another cliffhanger with Aimee insisting she was done filming, packing her bags, and trying to leave (though it is notable she did not try to take the pig with her, comrades). Aimee claimed to be "sick and tired of Aimee this, Aimee that," after Kirk and Codi gently teased her about wanting attention all the time. As Candace and Nilsa learned, however, the real problem is the anxiety Aimee feels over her boyfriend, Dylan, and his return to drug use. Aimee claimed to be broken up with Dylan when the half-season started, but it seems the situation is more complicated than that.

Shows like Jersey Shore and Floribama Shore really shine when the cast is incapable or unwilling to keep their real-life drama off-camera. While the cast of Jersey Shore, with the exception of Ronnie and Angelina, have largely figured out how to protect their juiciest secrets, the cast of Floribama Shore still has no clue. That's why Gus's mental health struggles and self-destructive behavior made for such good television in the first half of the season, and it's why Aimee's drama with Dylan is kicking this half into high gear. 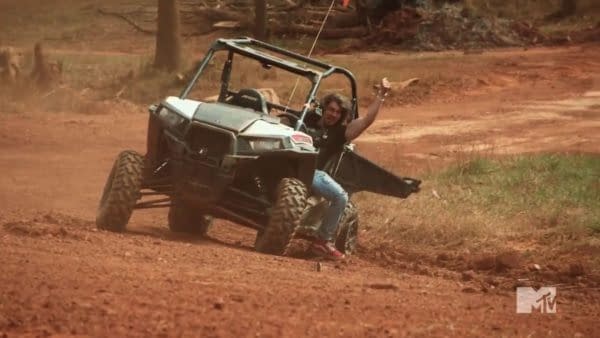 Review by El Presidente
7/10
Shows like "Jersey Shore" and "Floribama Shore" really shine when the cast is incapable or unwilling to keep their real-life drama off-camera. While the cast of "Jersey Shore," with the exception of Ronnie and Angelina, have largely figured out how to protect their juiciest secrets, the cast of "Floribama Shore" still has no clue. That's why Gus's mental health struggles and self-destructive behavior made for such good television in the first half of the season, and it's why Aimee's drama with Dylan is kicking this half into high gear.

Danhausen is All Elite after debuting on AEW Dynamite last night, but it's The Chadster who is truly Beach Broken after the event. Auugh man! So unfair!

Nancy Drew S03 Finale Preview: Does Nancy Have an Ace Up Her Sleeve?

With the series wrapping up its Season 3 run this Friday, The CW's Nancy Drew is offering a preview for "The Ransom of the Forsaken Soul."

James Gunn confirmed a second "The Suicide Squad" spinoff series is in development and likes the chances for Peacemaker Season 2.