As usual, a heads up for anyone still needing to watch this episode of HouseBroken, plenty of spoilers ahead. This episode of HouseBroken is working as a two-parter with the other half airing on Monday of next week on FOX. This episode's story revolved around Honey coming to grips with a new puppy arriving next door and the problem dealing with letting go of the need to hold back. Other characters find some development in their personality like The Gray One helping Tabitha decide to go back home, that her owners love her truly and have been trying to find her. Poor Shel deals with the complications of an owner growing up and lacking the same dedication they did as a child to their pet, and this greatly affects the turtle's future as we don't know whether or not he's ok after meeting the tire of his owner's car.

At the end of the episode, we witness Honey running off with the wild coyote she's obsessed over previously. Among the moments that went down, seeing the raccoon build a mini Honey out of the dog's hair and then getting caught was hilarious.

Like needing more cowbell, I simply need the raccoon in HouseBroken to get more screen time or at least become way more of the main character. The odd, crude and random nature of this character is what continues to garner the biggest laughs from me, outside the great jokes aimed at Ray Liotta needing to do work on Cameo with a low price request to make himself relevant. Moments like that one alongside glimpses of the raccoon's life in the shed, complete with a billowing summer hat, greatly help HouseBroken continue to develop others and make great content. Maybe it's my love of dark humor or the way this series has me continuing to connect to their characters in a slow but meaningful way, but either way, it's working. If HouseBroken continues working and implementing their brand of comedy and storytelling in this way, their next season will be even better. 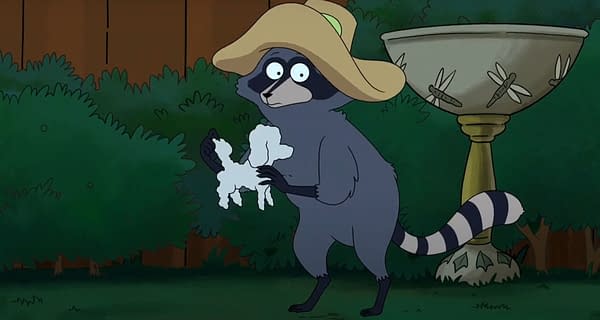 Review by Brittney Bender
8.5/10
HouseBroken has strengthened their storytelling, especially when it comes to characters interacting with one another. This episode is proof that a plot doesn't have to be compromised for the sake of a good joke.
Credits
Network
FOX

The comedic force of Michael Schur and best-selling author Shea Serrano has been given a series order from IMDb TV for the upcoming Primo.

Bob's Burgers Season 12 E05 Review: Growing Up Can Be A Rough Ride

FOX's Bob's Burgers showed us that sometimes the reality of growing up can be pretty rough and when Bob has a lot of wine he gets sassy.

The Muppets Are Better Than Quentin Tarantino In Every Way

Art is subjective, but that Bohemian Rhapsody cover by The Muppets is better than Quentin Tarantino's entire career.

Looking for quality horror series that doesn't require a ton of devotion isn't easy but we have 5 perfect places to start this Halloween.

Saturday Night Live scored a win by including comedy group Please Don't Destroy in recent episodes and having them on the writing team.