Prime Video's Paper Girls saw sci-fi storylines involving the lives of girls and women in television and has pushed to flip the script on expectations. The series has dropped all eight episodes of the premiere season, available now to stream. Based on the best-selling graphic novels written by Brian K. Vaughan and illustrated by Cliff Chiang, Paper Girls is a high-stakes personal journey depicted through the eyes of four girls, played by breakout leads Camryn Jones as Tiffany Quilkin, Riley Lai Nelet as Erin Tieng, Sofia Rosinsky as Mac Coyle, and Fina Strazza as KJ Brandman. Ali Wong also stars as the grown-up version of Erin, with Nate Corddry as Larry, Adina Porter as Prioress, and Jason Mantzoukas as Grandfather.

Paper Girls season one has some fantastic casting choices, with each of the girls giving some of the most vulnerable and powerful performances I've seen on TV lately. With control of the writer's room and direction executed by women, it becomes increasingly obvious the careful and purposeful intentions behind why certain scenes and storylines were handled. Themes are explored alongside sci-fi elements in a very cohesive manner. Topics of racism, antisemitism, being queer in the 90s, generational views, and class differences are only a few examined within the eight episodes of Paper Girls. The involvement of having younger characters confront their future selves was handled very well, nothing felt unrealistic in how someone would handle such an existentially upsetting moment.

Some of the most impactful and emotional moments came from how the girls handled the futures they were witnessing. They weren't the only incredible actors on Paper Girls, the acting from Mantzoukas, Porter, Wong, and Corddry matched so well with their shifting settings. Grandfather went back and forth between being a casual force that brought caution to your gut and a sternly disciplined outlook on the task at hand within seconds. It was a truly unique role to see Mantzoukas in, same can be said for Porter, who truly was terrifying yet electrifying in a similar way to Grandfather.

Beyond the truly surreal and fun representations of time travel and the absurdity that can happen with all of that, Paper Girls has some pure moments of true adolescent joy and freedom alongside the confusion and terror that can accompany growing up. It helps that the editing and cinematography of the series premiere season are consistent and fit the mood of each episode. And in each episode, the connection to these girls' experiences is unmistakable, making the series a truly great representation of how someone their age would react to the circumstances. Also, each character still reacts in their own ways, and no character is compromised on that front.

Paper Girls won't be for everyone, but it's everything for many girls out there who deserve an awesome sci-fi show like this one. It's a well-done first season, leaving some excellent cliff-hangers there for a potential second season and every theory a fan could hope to develop with friends. There's a great flow to the season, from episode to episode, making falling in love with the story and certain characters stronger by the minute.  In the end, hope for another season and more answers to what happens to Erin, Tiffany, Mac, and K.J. is all too real, and I love the series for developing so much investment from those who watch it. 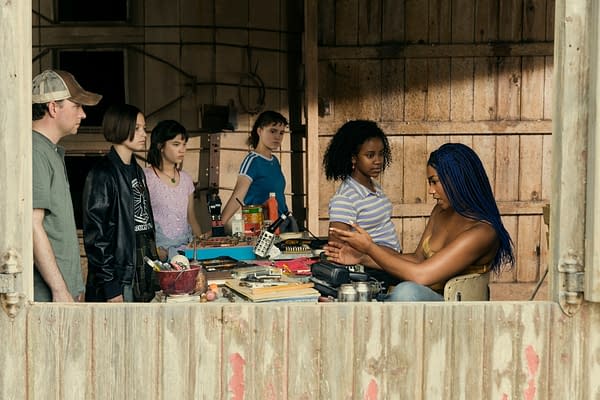 Review by Brittney Bender
9/10
The first season of Amazon's Prime Video series Paper Girls has a slower pace than some might expect, but that only serves to enhance the compelling story that takes viewers on an epic sci-fi journey across eight episodes. Mixing the absurd fun of time travel stories with the complexities of growing up, Paper Girls truly is an absorbing work of storytelling more than deserving additional chapters.
Credits
Platform
Prime Video

Hulu's Only Murders in the Building S02E09 explores how tricky lies can get, how amazing Shirley MacLaine is & why family can be complicated.

Four years after it was announced a "Buffy the Vampire Slayer" reboot was in development, it seems the project is officially "on pause."

In this mini-teaser for FXX's Archer, Sterling learns quickly that Lana doesn't care about his 10 steps to keeping "moist yet firm skin."