The fifth episode of Paramount+'s Star Trek: Discovery was the fourth-season chapter "The Examples," which sees the Federation encountering a former enemy and intervening with their politics during a crisis. Starfleet is tasked with a humanitarian mission with the U.S.S. Discovery leading the way in Emerald Chain territory. A particular point of interest that gets in the way of the mission is a planet that houses the condemned, with the prison is protected by a shield that prevents transport. Capt. Burnham (Sonequa Martin-Green) and Book (David Ajala) transport down to the planet to try to infiltrate the prison directly.

While the duo is on the away mission, Saru (Doug Jones) leads the evacuation efforts. The ship also hosts Ruon Tarka (Shawn Doyle), who's been the Federation's primary beneficiary of Stamets' (Anthony Rapp) research concerning the galactic anomaly that threatens their universe. Discovery's chief engineer, perhaps ironically, takes a lot of exception to Tarka's abrasive and borderline sociopathic nature even to the point where he forces a growl out of Saru in an awkward moment that leaves him puzzled at the display of alpha male posturing.

While much of the episode takes place on both fronts, we do get a vulnerable moment from Culber (Wilson Cruz) where he confides in Kovich (David Cronenberg) about being burned out trying to remain stoic in the presence of persistent disaster. Combined with the personal trauma of dying before Discovery traveled to the future, it's quite certainly more than understandable. And given the grind of serving on a starship and having to constantly find ways to bring living things back from the brink of death, it was nice to see this issue addressed in a way it never was with previous "Star Trek" medical professionals like McCoy, Troi, Crusher, Bashir, The Doctor, or even Phlox.

As for the two main arcs, Burnham and Book deal with the fallout of Emerald Chain's brutal politics with a memorable performance from Michael Greyeyes as Felix, a prisoner who harbors his own guilt but not for why you might think. He should be considered for best guest actor Emmy honors based on this performance. Directed by Lee Rose and written by Kyle Jarrow, "The Examples" (which might not necessarily be the best title for the episode) works on every level within the framework of the series because there was never a need to dramatically shift between storylines. A strong, effective Discovery episode, "The Examples" was more than worthy of the "Star Trek" name. 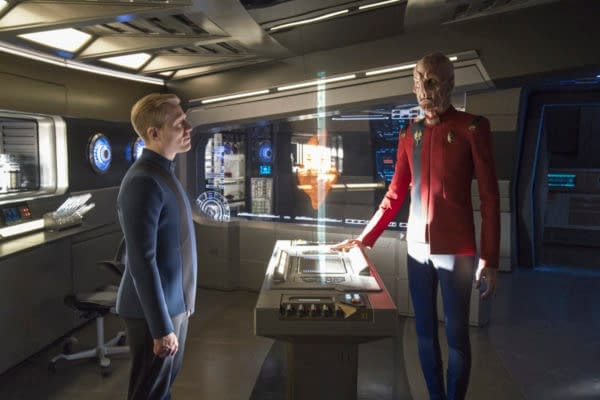 Review by Tom Chang
9/10
Every arc of the Star Trek: Discovery episode "The Examples" fit together seamlessly, with cohesive pacing and dynamically memorable performances from guest stars Michael Greyeyes and Shawn Doyle. Even the non-mission-related moments in this chapter evoked a thought-provoking moment within "Star Trek" lore about trauma and duty.
Credits
Director
Lee Rose

Tony Khan is eyeing an international expansion for AEW now that the world has gotten bored with the COVID-19 pandemic and loosened restrictions.