This week's episode of Star Trek: Lower Decks focuses on Eugene Cordero's Samanthan Rutherford as we get a better idea on the source of random glitches he has to deal with throughout the series in the episode "Reflections." There's also a much more grounded adventure with Tawny Newsome's Mariner and Jack Quaid's Boimler as they're stuck at an intergalactic career fair promoting Starfleet at their designated recruitment booth. This is your minor spoilers warning.

Mariner and Boimler spend the bulk of the episode being the butt of the joke for the galaxy, primarily from random individuals passing by and an archaeologist (who happens to be former Starfleet) taunting them each way while thumping her chest from the fresh independence she still gets to enjoy. On the Cerritos, Rutherford finds the implant on the side of his face is malfunctioning more than usual, depriving him of valuable sleep due to his recurring nightmares. Tendi (Noël Wells) resets his cache, which triggers a takeover by an alternate personality that's been repressed.

As much of the series is about nitpicking the ethics of the Federation and logic of the Star Trek franchise, "Reflections" is actually one of the most nuanced episodes because of the focus on Rutherford and how he's portrayed in a new light. He's also the only character in the series we actually got to dig deep into his past since we haven't explored Mariner, Boimler, or Tendi during their time at Starfleet Academy before the Cerritos. It's serious for Lower Decks but not to the level of deeply-rooted trauma that brings about monumental change, and it works because of its relatability. Directed by Michael Mullen and written by creator Mike McMahan, this is easily Cordero's best performance as Rutherford and his psychological doppelganger. I hope we get more episodes like these in the future where we can get similar exposition into the characters' pasts. 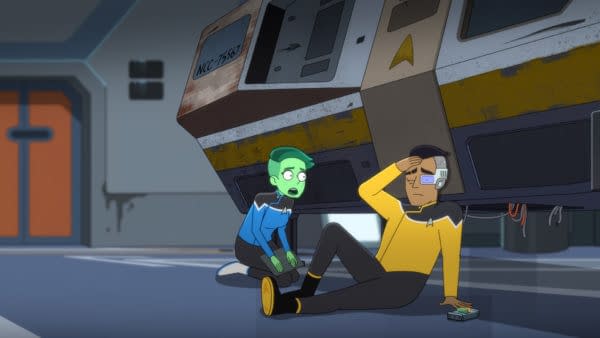 Review by Tom Chang
8.5/10
Paramount+'s Star Trek: Lower Decks churns out its best Rutherford-centric episode yet in "Reflections," with Eugene Cordero owning this episode in every way possible. Creator Mike McMahan and director Michael Mullen hit a home run with one of the best in the series yet.
Credits
Director
Michael Mullen

Charlize Theron Thanks Arrested Development for Helping Save Career

After realizing that Aeon Flux was going to be a flop, Charlize Theron looked to then-FOX's Arrested Development for a career boost.

Star Trek: The Next Generation alum Ronny Cox discusses his return as Admiral Edward Jellico on Star Trek: Prodigy and those Jellico memes.

The Walking Dead: Dead City star Jeffrey Dean Morgan offers some additional insight into the Negan that viewers can expect in the spinoff.

With the animated series set to hit screens on December 15th, here's a look at a new sneak preview for Netflix's Sonic Prime.

With Amazon's Prime Video series returning for its final season on January 13th, here's a look at a very intense teaser for Hunters Season 2.

Stargirl creator Geoff Johns on differences between the series finale & a season finale and how Season 4's inspiration was "very different."