When it came to compelling storytelling for season two, I was ready to throw in the towel on Star Trek: Lower Decks, given the last few outings. The penultimate episode "wej Duj" gave me the kind of story I was looking for. Rather than the standard senior and lower decker arcs, we get three in the form of perspectives from the Federation on the U.S.S. Cerritos and two others in the Che'ta, the Klingon Bird of Prey, and the Sh'Vah, a Vulcan cruiser. Given the short amount of time each episode, there's a lot that goes on within the context as all paths eventually converge.

The common thread on board all three vessels is that the lower deckers on all three ships are never taken seriously enough by the senior officers and often ridiculed at any indication that a senior officer's authority is questioned. While it can potentially be a broken record, it contrasts with how each faction deals with it. As much as we're used to seeing the Starfleet core four in Mariner (Tawny Newsome), Boimler (Jack Quaid), Tendi (Noël Wells), and Rutherford (Eugene Cordero) complaining about their irrelevance, we see Ma'ah (Jon Curry) trying to do the same onboard the Che'ta and T'lyn (Gabrielle Ruiz) on the Sh'Vah. The Starfleet lower deckers try an activity to bond with their senior officers while the other two try to just be taken seriously.

Contrasting Ma'ah's story with T'Lyn's created an effective commentary on how Klingons and Vulcans operate within their respective societies. With the Klingons, we see the earlier struggle to balance showing strength with showing honor & wisdom a constant power struggle. On the Vulcan front, logic still gives way to hierarchy depending on who's delivering it, as T'Lyn discovers in her youth to her disadvantage. Obviously, since the series is still Federation-centric, you're never going to get deeper stories surrounding other factions. I hope to see more from Ma'ah and T'Lyn in future episodes because they offer a nice change of pace perspective-wise. Written by Kathryn Lyn and directed by Bob Suarez, "wej Duj" provides the kind of compelling story you rarely see in the animated comedy & shows that when pushed in a proper direction, the series can be greater than what we've witnessed so far. The season finale of Star Trek: Lower Decks streams October 14 on Paramount+ 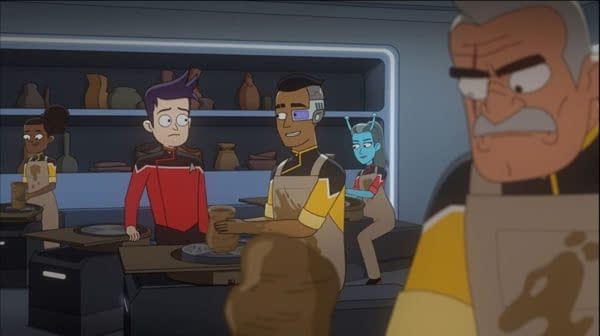