The season three finale of Star Trek: Lower Decks in "The Stars at Night" doesn't address the heavily contentious nature of Capt Carol Freeman (Dawnn Lewis) and her daughter Ensign Beckett Mariner (Tawny Newsome), but it does establish a couple of things. First, perhaps the best thing sometimes when two people are fighting is a little space, and second, it reminds audiences how much the franchise is truly driven by humanity and its heart as far as its values at its core. This is your minor spoilers warning.

The main issue at hand here is Adm Les Buenamigo (Carlos Alazraqui), who intends to automate the basic Star Trek experience…at least at the California-class starship level with his Texas-class ships driven by AI. When Buenamigo and Freeman get an audience with Starfleet Command, the decision initially was made to start retiring the California-class ships, which would reassign everyone from those ships, including the U.S.S. Cerritos. Freeman is not going down without a fight proposing a string of tasks with the U.S.S. Alito, one of the Texas-class ships for various missions. In the spirit of competition, the committee agrees, and the "space race" is on.

Meanwhile, we see Mariner adventuring it up with her archaeologist partner Petra Aberdeen (Georgia King), another former Starfleet officer more than happy away from rules and regulations. We don't get deep into their plot as the bulk of it deals with the Cerritos and its crew doing everything they can to stay relevant. We get a few standouts in this episode, especially with Lewis taking front and center as we see a traditional Star Trek captain if she were the star of the series. We also get an amusing moment with Fred Tatasciore's Lt. Shaxs, which speaks more on the commentary on how the franchise treats its security officers sometimes.

Credit goes all around from director Jason Zurek and creator Mike McMahan, who wrote the episode, for staying on task and allowing everyone across the board opportunities to contribute. Sure, the season finale was largely predictable, but the workload to the finish line was satisfying because it was truly a team effort. As fast as galactic-level events or major plot twists, it is what it is on Lower Decks staying more grounded than its bigger live-action counterparts. It's a series that's evolved on its own, even when there are moments of gratuitous fan service. You can hardly blame McMahan and company for that since there's probably about a 90-95 percent chance anyone who works in Star Trek by now is a fan or initially had a connection to the fandom community by proxy before joining. 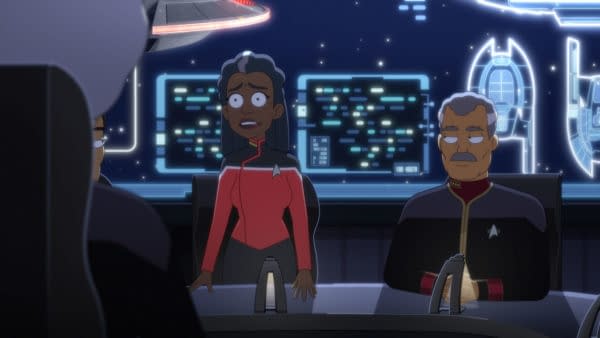 Review by Tom Chang
9/10
The Star Trek: Lower Decks season finale "The Stars at Night" reminds us again the core of what makes the franchise work isn't the technological marvels of the future but rather its heart and humanity.
Credits
Director
Jason Zurek

Checking in with Stephen Colbert, Ted Lasso star Brett Goldstein was asked about the show's future: “I would happily play Roy Kent forever.”

With Night Court back in session next week, we have a look ahead at what's to come with preview images for the next two episodes.