It's safe to say that fate and destiny are the prevalent themes for Star Trek: Strange New Worlds and the episode "Lift Us Where Suffering Cannot Reach" takes it to another level. The beginning has Uhura (Celia Rose Gooding) learning security protocols from Lt. La'an Noonien-Singh (Christina Chong). The green cadet still has a lot to learn when it comes to following proper protocols. They find themselves in the middle of a conflict when a ship is attacking another. With minimal effectiveness, the Enterprise packed too much of a punch to the attacking vessel while saving the crew of the fleeing vessel. Consider this your minor spoilers warning.

It turns out the main passenger is a significant VIP in that we have the First Servant (Ian Ho), a holy child and intellectual prodigy invaluable to the Majalan. And accompanying him are his biological father and doctor Gamal (Huse Madhavji) and Alora (Lindy Booth), an old flame of Capt. Pike (Anson Mount) back when he was a lieutenant in a previous mission. We come to find out that not everything is what it seems within the confines of the conspiracy while is still having difficulty making sense of his fate and ultimate destiny.

Sticking to those themes, Dr. M'Benga (Babs Olusanmokun) is discovering a potential breakthrough that may help with his daughter's illness after spending some time with Gamal and the First Servant. Unfortunately, the Majalan's stubbornness and secrets remained hurdles until the episode's shocking end. Directed by Andi Armaganian and written by Robin Wasserman and Bill Wolkoff, it puts a perspective on how a mutually-beneficial relationship can get lost as tradition and morals collide to muddy the waters. It's the kind of grey area that always poses a conundrum within the franchise and we see Pike with that rare loss since his morals couldn't overcome the world's traditions he came into especially without any authority or jurisdiction to enforce. 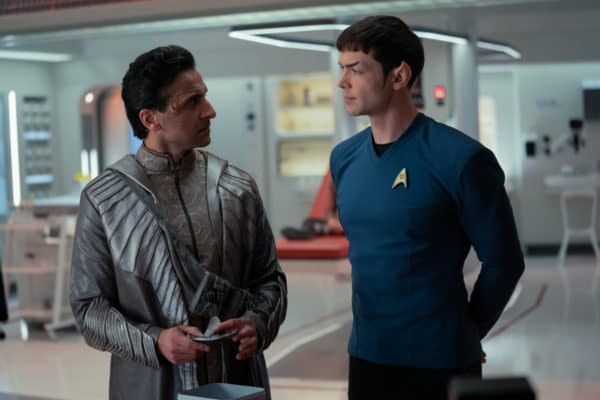 Review by Tom Chang
7.5/10
Directed by Andi Armaganian and written by Robin Wasserman & Bill Wolkoff, Paramount+'s Star Trek: Strange New Worlds S01E06 "Lift Us Where Suffering Cannot Reach" puts a perspective on how a mutually-beneficial relationship can get lost as tradition and morals conflict. It’s the kind of grey area that poses a conundrum to the franchise time and again. It was also interesting to see Pike take a loss, with his morals no match for the world’s traditions. Standout performances by Anson Mount, Babs Olusanmokun, and guest stars Ian Ho, Lindy Booth & Huse Madhavji anchor this powerful episode.
Credits
Director
Andi Armaganian