HBO's The Baby brought us an interesting start to the origin story of the baby and got me wondering how many women exactly have had to watch over the seemingly murderous hot potato before Natasha. Fair warning ahead of time, plenty of spoilers for the episode will be discussed after the image break…

We begin the episode with a sort of flashback to the origins of the traveling demonic baby in a sort of "hot potato" set of events. A middle-aged woman comes into a cookie shop that appears to be closing but begs for them to stay open for her to grab a coffee. Who's with her? The baby, of course… upsetting dogs and comfortably watching death unfold. We got to see how the baby ended up with Lydia before landing in the arms of Natasha. The previous caretaker before Lydia chokes on her cookie and dies. Appearing distraught from the start, she passes away with a struggle to simply nourish herself on a sweet treat and the baby appears to be left in the care of the cashier who we end up discovering is Lydia herself.

Going back to Natasha as she attempts to navigate having the baby in her care, she invites Rita over for help. Only to make things more confusing for Natasha, Rita acts as though it's incredibly normal for the child to be under her friend's care as if she's actually the mother or guardian. Asking her friend Mags about the baby, Natasha checks in with multiple people about her own reality when it comes to the baby. Checking out the cookie shop herself for information on Lydia (the previous guardian of hot potato demon baby), Natasha seems to only find out there isn't much family around to hand the baby off to and that changing diapers can be utterly disgusting.

After helping with changing the baby's diaper, the poor cookie shop's manager runs outside to see his dog has run out into the road to grab a ball. After what inevitably happens (semi-truck plus dog chasing ball), more clarity comes about as Natasha can't seem to get a moment alone as the baby spontaneously appears wherever she goes in the apartment. Receiving a mysterious envelope with a USB drive inside, Natasha discovers some photos (from very old to only years ago) that shed some light on how many hands this hot potato baby has gone through. Trying to leave the baby in a field after dropping a call to her sister Bobbi, Natasha finds herself breaking down in the same field reconsidering her actions. Getting back into her car with the baby she gets a jump scare as the woman from the seaside cabin rental speaks from the backseat saying, "I think we need to talk." Whelp, that's probably a good idea.

What I found interesting at the beginning of this episode was the book on the counter near the register that the worker was reading before the woman and baby came in. It's a book published that was published in 1981 called This Bridge Called My Back: Writings by Radical Women of Color. The book includes many different perspectives with its description reading, " Through personal essays, criticism, interviews, testimonials, poetry, and visual art, the collection explores, as coeditor Cherríe Moraga writes, 'the complex confluence of identities—race, class, gender, and sexuality—systemic to women of color oppression and liberation.'" Such an interesting and purposeful choice for this episode, I greatly applaud the decisions made with such detail to include stuff such as this. The woman reaching for the bell next to the book is incredibly impactful.

The music, especially in the diaper changing scene, pairs perfectly with the mood and panic of it all for Natasha (and honestly for me watching it all). The Baby does a fantastic job at the balance between deep concern and judgment of the main character's actions. While I find myself rooting for Natasha many times, I also get this weird sense of guilt because the drive of empathy witnesses the baby itself and wants to step in. The struggle alone to film babies, even when using twins, doesn't show in the episode of the series so far. It's evident that the process was well thought out and focus was placed correctly throughout. This was a fun and at times shocking episode of The Baby, I can only assume more craziness will occur in the third episode.

The Baby Episode 2 "The Seduction" 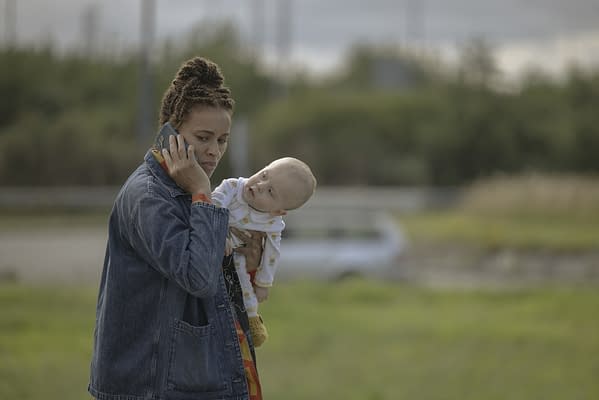 Review by Brittney Bender
9/10
HBO's The Baby Episode 2 "The Seduction" brought up more moments that shocked me and then made me laugh but not in the same way the previous one did. Close to being a fantastic episode, there were moments that didn't exactly line up in the best way but ended up telling the story in a smooth set of scenes.
Credits
Network
HBO