The Book of Boba Fett season finale delivered as expected on the build-up between the forces of Boba Fett (Temuera Morrison) and the Pyke Syndicate. Their conflict is over the spice trade that the Syndicate wants continuing while the former bounty hunter disagrees. With their forces set, it becomes both a cerebral chess match and an all-out physical battle for control as we see our main players make their moves. Consider this your official minor spoilers warning for the season-ender "In the Name of Honor."

The bulk of the episode sees most of the characters introduced throughout the series return as Boba Fett's allies along with The Mandalorian Din Djarin (Pedro Pascal), fighting for the soul of Mos Espa in true Western fashion. As we've come to expect from director Robert Rodriguez, whose past filmography includes action classics like the "El Mariachi" trilogy, From Dusk Till Dawn, Machete & the "Spy Kids" franchises, no one is wasted here and everyone is given their moment in the sun to shine. The finale is easily the best episode of the season, which sadly isn't really that high a bar considering we got far less of the actual Boba Fett-focused series and more shared real estate with The Mandalorian.

Keep in mind that about one-third of the first season of The Book of Boba Fett was literally dedicated to Pascal's Mando and Grogu because they couldn't tell a complete story without filling in the blanks of what happened to Din since the second season of The Mandalorian. Even when Morrison's Fett appeared on Pascal's series to lead into the current show, he never took over. He was treated the same as the other guest stars. While audiences are well aware of how important Din is going to be in the final fight, both leads shared equal screen time. If you saw nothing else but the finale, you wouldn't know whose series this actually was. That's the kind of egregious decision that creator Jon Favreau and EP Dave Filoni need to own up to when it comes to the failings of the series. The character in a show's title should never be made to look like a supporting character.

The sequences and stunt work were clearly top-notch and represent peak "Star Wars" as far as action goes. I would even argue that it demonstrates the best use of prequel-era tech of the franchise as we have an impressive CG fight between a rancor and giant towering droids. But sadly, we saw no sign of Danny Trejo, who had a hand in creating some of the best Rodriguez action sequences of all time. While Sophie Thatcher (Drash), Jordan Bolger (Skad), Amy Sedaris (Peli Motto), and Carey Jones (Black Krrsantan) did their best work of the series, the biggest standout goes to Corey Burton's Cad Bane. Rodriguez allowed him to become even more menacing than his animated series counterpart in The Clone Wars.

It's not just the supporting characters who were afforded the chance to shine, but also our core characters in Boba, Din, and Fennec (Ming-Na Wen) also took some time to remind viewers that they're no slouches in the "badass" department themselves. In the end and after the sand storms have settled, The Book of Boba Fett probably worked far better as a standalone film or no more than 3-4 episode limited series. It went to places it didn't need to go to and by the time it told us where it wanted to be, it was too late. Sadly, The Book of Boba Fett left far too many chapters unwritten. 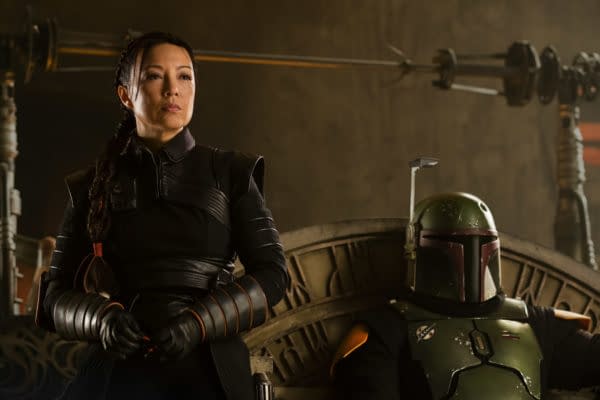 Review by Tom Chang
8/10
In the end and after the sand storms have settled, The Book of Boba Fett probably worked far better as a standalone film or no more than 3-4 episode limited series. It went to places it didn’t need to go to and by the time it told us where it wanted to be, it was too late. The season finale "In the Name of Honor" checked all the right boxes when it came to a Western-style final showdown payoff. I just wish the journey made it worthwhile aside from the bonus episodes of The Mandalorian from creator Jon Favreau and EP Dave Filoni. Sadly, The Book of Boba Fett left far too many chapters unwritten.
Credits
Director
Robert Rodriguez.