In The Falcon and the Winter Soldier episode four, it has become apparent that this show has some really big ideas but not enough time to execute all of them. It's a shame because the ideas being teased are really interesting and something that could be really explored, but instead, they feel like setups for other movies. In fact, this series is beginning to feel a lot like Iron Man 2 in that it's a lot set up for other things without having much to do itself. They have teased expl0ring the world after the Blip and what it was like not only for the people who came back but also the people left behind, but they don't appear to be really digging into that as much as they could. They teased the Bradley's and whether or not Steve Rogers is the original super-soldier, but Isaiah has become a footnote in the search for the new serum. They have teased the idea of the world after the Blip was one without borders, humanity truly coming together in a way that is hard to imagine, but we only hear about it from Karli. It's all-tell and no show. Are these things that are to be explored in other shows or movies? Maybe but it means that titular characters are left without much of a show.

The narrative in The Falcon and the Winter Soldier keeps pointing out that Zemo and Karli both have good points, which means they are going for nuance, but they aren't giving anyone a chance to really present an argument. For the first time, this episode, we see Karli sit down with someone and explain what she is doing and why. It still doesn't tell us how she managed to get her hands on the serum or why she is the one that needs to lead this "revolution," as it is called in the narrative. It's a great scene for the character that she is talking to, but several people are starting to get the short end of the stick. It feels like Sam is still waiting for this show to be about him. It's not that he sidelined in the action, but this show was pitched as both Sam and Bucky dealing with the weight of Steve's legacy and has instead become a fetch quest to get rid of the bad guy. The only place they have really explored the idea of Steve's legacy and what that means is with Walker.

Walker takes center stage in this episode, and we finally see his true colors. The weight of the legacy of the shield he is carrying around is really starting to get to him, and he's breaking under the pressure. However, that isn't something that Walker can deal with. He believes that he earned the shield and the fact that he isn't succeeding, that failure, is causing him to lash out. We see that really come together in this episode of The Falcon and the Winter Soldier and the work that Wyatt Russell has put into Walker is fantastic. He is, by far, one of the easiest to hate characters that Marvel has put on screen in a long time, and all the credit to Russell for playing Walker in a way that makes him so easy to hate.

While the narrative appears to be showing us why Sam is worthy of the shield, which is good we like show don't tell, it does mean that Sam isn't really evolving from a character standpoint. Sam doesn't have the same information that we do as viewers of The Falcon and the Winter Soldier, and it isn't just about showing us, the viewers, that Sam is worthy, but he needs to go through an arc and find that confidence within himself. It just isn't there, and two episodes do not feel like enough time for Sam to come to terms with all of this and truly take on the shield. As for Bucky, we know that Ayo is back from the ending of last week's episode, and we get to see more of Bucky's time in Wakanda, which makes the fact that the disintegration of his relationship with Ayo, in particular, was all the more heartbreaking. However, it's something that could have been plaid out a little slower and is instead yet another plot point brought up and then kind of resolved by the end of the episode. Hopefully, this isn't the last we've seen of Ayo.

This episode was better than last week, but it still feels like there is simultaneously too much and too little going on at once. The Falcon and the Winter Soldier is a show looking to conquer some big ideas, but it seems that six hours isn't going to be enough time to explore all of them. Instead, we're going to have six hours of setup for some other stories, some decent character movement for Sam and Bucky, and one hell of a performance by Wyatt Russell in the end. We have two episodes left, and it doesn't feel like two hours is enough time to time to make this good show great. It was always going to be hard to follow WandaVision, but The Falcon and the Winter Soldier is struggling more than anyone could have expected.

The Falcon and the Winter Soldier E4 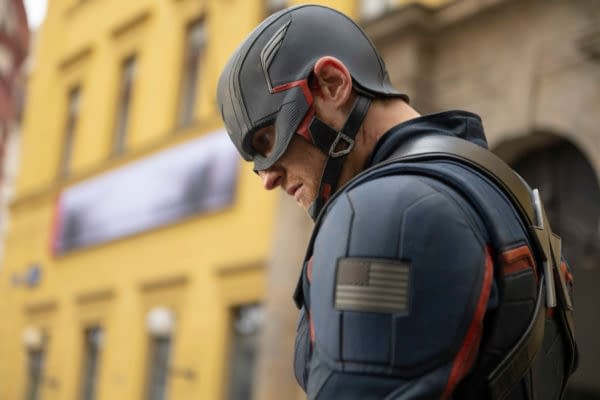 Review by Kaitlyn Booth
8.5/10
In The Falcon and the Winter Soldier episode four, it has become apparent that this show has some really big ideas but not enough time to execute all of them. It's a shame because the ideas being teased are really interesting and something that could be really explored, but instead, they feel like setups for […]