The Last Podcast Network Country Jamboree not only had the event live in person at the Ryman Auditorium in Nashville, Tennessee, but it was included as a virtual event through Moment House on June 18th. Not anywhere close to the Nashville area, I was able to view everything as it was all included virtually through Moment House.

As seen in their poster, the variety of shows within the network came together all in one place that night. The Last Podcast Network Country Jamboree was an overall fantastic and insanely hilarious time for fans and newcomers alike. What did mess with the event initially only pertained to those who, like me, were watching virtually. At first, I thought it was my connection or my laptop being unusual, but based on the chat and a few tweets pertaining to the technical issues on Twitter it seemed to be everyone experiencing dramatic pausing and buffering. Even at the lowest setting where things would get pixelated to hell, it would still lag and take time to catch up, ending with the virtual audience missing almost the entirety of the segment from The Story Must Be Told podcast.

Incredible show at the Ryman, thank you Nashville! @LastPodNetwork pic.twitter.com/xJ7fxZzm6k

Once past the tech issues, things seemed to go rather smoothly as the event moved on to No Dogs in Space as they discussed The Louvin Brothers. There was a lot of fun and the evening was both a comedy joy and informative set performances. From Nigerian Prince scams in the form of Kenny Chesney on LinkedIn to questionable old PSA videos about how to not get kidnapped, the entirety of the network's personality showed up in full force and I loved it. The laughter went into full force once Wizard and the Bruiser started doing a game of "Smash or Pass?" with characters from Super Mario Bros. To complete that moment, Henry Zebrowski arrived on stage in an inflatable Pikachu costume uttering words filled with cringe and horniness. When you break down into tears of laughter, you know you're watching some incredible and odd moments of comedy.

The Last Podcast Network Country Jamboree contained mostly an evening filled with fantastic bits, sketches, stories, and more. From Page 7 to Brighter Side, each podcast brought something connective yet unique to the stage of the Ryman Auditorium. It became a collaboration that would honestly get me to listen to more of the network's podcasts and expand my library. It can be easy to have fun with an audience that knows a network in and out, but it's a whole other difficult thing to grab onto newcomers and convince them to relax and enjoy the show. The entire network of Last Podcast put every ounce of care and excitement into the event and it showed. While technical difficulties messed up the energy and excitement at the start of things, the content itself was fantastic and worth that wait. 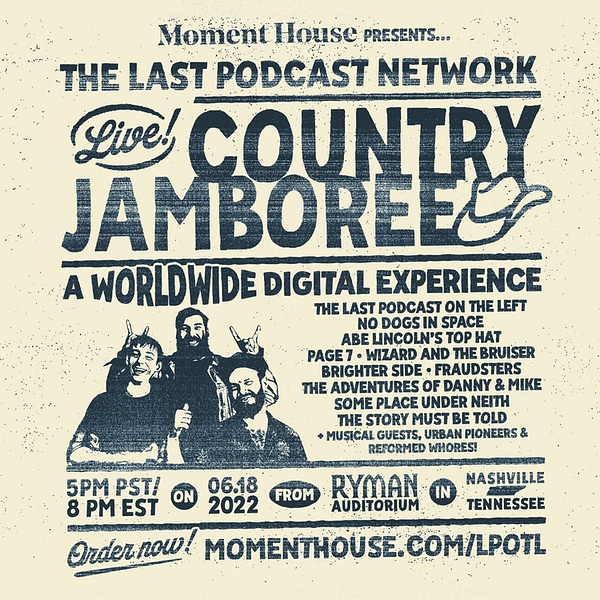 Netflix's The Sandman offers a world built by Neil Gaiman that has a unique ability to explore the complexities of personal beliefs.

Only Murders In The Building Season 2 Episode 8: Playing With Darkness

Darkness invades the Arconia, and not even Oliver's dip is safe in Hulu's Only Murders in the Building S02E08 "Hello Darkness."

Will Kenny Omega Return for the AEW Trios Tournament Next Week?

The Young Bucks need a partner to compete in the Trios Tournament on AEW Dynamite next week... and it just so happens Kenny Omega is due back.

What We Do in the Shadows S04E07: Nandor & Laszlo Have a Jabroni-Off

In the following promo for FX's What We Do in the Shadows S04E07, Nandor and Laszlo go on a hunting trip to work on their differences.

Returning for Season 3 on August 31, here's a look at the preview images for DC's Stargirl S03E01 "Frenemies - Chapter One: The Murder."

Archer Season 13 Teaser: In Sterling's Defense? It WAS Saturday

With less than two weeks to go until the animated series returns, here's a look at the newest teaser for FXX's Archer Season 13.