After holding one of the most successful Kickstarter projects in history, the crew of Critical Role has finally released The Legend Of Vox Machina. Working together with Titmouse Inc. to produce the show and having it distributed on Amazon Prime, the crew have brought to life the adventures of their weekly streamed D&D campaign. Campaign One, to be precise, features the members of the brazen, dickish, sometimes absolute disaster of an adventuring party known as Vox Machina. (Which, incidentally, even though D&D is not mentioned in this animated series, this is the first TV cartoon show loosely based on the game to be produced since 1985.) But did they manage to score a critical hit with this show or epically fail? We got to check out the series ahead of its January 28th release, and here are our thoughts.

So to be clear before we move on, no, this review will NOT contain heavy spoilers. But we are going to talk about it, in length, because it's a review. So if you're one of those people who are about to yell at us for ruining the experience for you, THIS IS YOUR ONLY WARNING! WE'RE GOING TO REVIEW THE SHOW. If you don't wanna know, scroll to the bottom to read our overall thoughts.

For those who are not already aware of what Critical Role is and what this show is about, here's the short version. A group of voice actors who love to play D&D got together and started playing their own campaign, which eventually got picked up by Geek & Sundry and turned into a weekly show where they continued their exploits from the home game with the same characters. The first campaign did so well they came back for a second campaign and are currently in their third, but the characters and adventure from the first one became so popular, it led to this series being created. The show's storylines are based on the very adventures they played both at home and on the show. The first ten episodes of the series focus on two particular adventures, the first being how they encountered and worked with the leadership of Emon, and the second focused on one of the biggest storylines of the campaign: The Briarwoods.

The show has done an amazing job of faithfully bringing all of the characters to life. Granted, it isn't hard when the very people who created them are the ones in charge of making sure they look and sound how they should. But the folks at Titmouse went the extra mile with these characters to make sure they are as accurate as they can be for an animated show. All of Grog's mannerisms and phrases and nods to his not-so-bright intelligence are about as accurate as they get to the way they were played in real life. Same for how Keyleth holds herself, how Scanlan acts toward every lady that passes by, or how seriously Percy takes everything around him. The writing and acting in each episode nailed these characters about as well as could be expected. The performance shines through the TV and makes everything they say and do that much more important as these are not personalities in development, they know who they are and are unrelenting in that presentation.

The look and feel of this world are immaculate as you can see a lot of greatness inspired and influenced from several different shows. Some of the landscapes, character movements, and fighting sequences feel like they've been ripped from shows like Batman: The Animated Series and Avatar: The Last Airbender. There are hints of anime influence from shows like Cowboy Bebop and Fullmetal Alchemist, and action elements from some of the more recent Marvel and DC animated properties. This show was drawn and animated by people who have a passion for making a world look and feel the way it should when brought to life. Everything from the capital city of Emon to the small farming villages of the Shalesteps, to the run-down city of Whitestone. These locations, the people who live in them, the problems that lurk around them, and their interactions with the character as they visit them are well done in every aspect. Even the CG elements feel natural and don't stick out like a sore thumb as they do in other shows.

The voice cast for The Legend of Vox Machina is amazing from top to bottom. And we're not just giving praise to the main cast, comprised of Laura Bailey, Taliesin Jaffe, Ashley Johnson, Matthew Mercer, Liam O'Brien, Marisha Ray, Sam Riegel, and Travis Willingham. Beyond the adventuring party and random characters voiced throughout the world, they went above and beyond to get some great people to take on iconic roles tied to this series. Like getting Doctor Who himself, David Tennant, to play General Krieg. Or The Walking Dead's own Khary Payton to voice Sovereign Uriel. Or Indira Varma as Lady Allura, Grey Griffin as Delilah Briarwood, and Sunil Malhotra as Shaun Gilmore. Each of them took on a role once played by Mercer as the DM and gave them life with an entirely different approach to the role. All of whom were led by actress and voice director Mary Elizabeth McGlynn to bring out the best performances in everyone.

As to the content of The Legend of Vox Machina, it pulls absolutely no punches with how this is presented. These are adults playing a very adult version of the game. There is blood, there is fighting, there is swearing, there is nudity, there is a lot of flipping people off because you can. I feel that that needs to be said here because in case you managed to miss all of the trailers for this show, you need to be aware it is an adult adventure for adults. With a lot of content that only adults will get. But also because there are a lot of themes in here that probably should only be seen by mature audiences. We're not prudes by any means, a lot of what's in here was great and we had a great time watching it. But you got one character trying to sleep with everything, one who slices off the hand of another character, and some very dark tones when you get a few episodes in that will even make adult viewers grit their teeth in anger. It's not full-on sex and gore, but this is far more Adult Swim than Nickelodeon, so bear that in mind.

For the absolute hardcore, diehard, obsessive, can quote almost every episode fans out there who have been following Critical Role since its inception… parts of the show are going to bug them. Because not everything in the show is accurate to what happened at the table. Yes, there is a character missing. No, Grog does not have his beard yet. Yes, some of the events have been glued together with other events to tie the story together a little easier. If this is the kind of stuff you're focused on when watching the show, you're paying attention to the wrong thing.

The Legend of Vox Machina is designed to be a retelling of their story, hence the term "The Legend" in the title, and not the term "The Truth". Because trying to explain to people who have never seen this property before what happened over the course of several 4+ hour game sessions with only 23 minutes per episode would be insane. For those fans, you can have the original version to watch over and over on YouTube, it is not being erased from history. But understand for the purposes of the show, a lot of things get simplified and left off the table to tell a concise story. It doesn't mean they're brushing it off or trying to rewrite it, it just means there's a more important story to tell.

Overall, The Legend of Vox Machina is one hell of an animated adventure that is well worth your time to watch. Is it perfect? No. There are little things here and there that it could do better and it has room for improvement. That said, when you consider the source material and how all of this came about, imperfection is not that bad, and if anything, makes for an interesting story to watch. This is not your typical fantasy adventure, but that feels like the exact kind of story that needs to be told these days. An imperfect band of misfits trying to do good in an imperfect fantasy world. Told by people who know these characters inside and out and have a passion for the story they want to share. Do yourself a favor: kick back, turn your brain off, and let them tell this story to you.

The Legend of Vox Machina 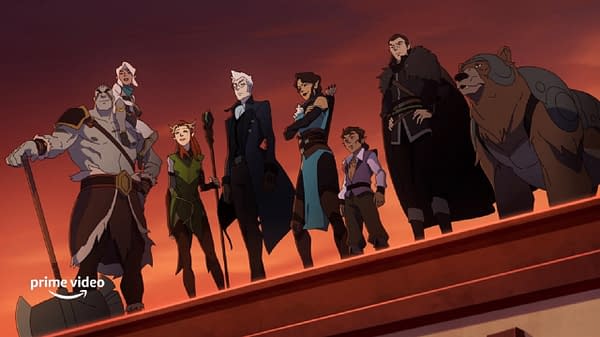 The Game Awards Announces Special Concert At The Hollywood Bowl

At the end of The Game Awards last night, it was revealed that 2023 will have a new event added to the schedule with a special 10 Year Celebration.

Hey there! You may not have realized it from the bombardment on social media, but The Game Awards 2022 took place last night.

Your Annual List of Everything Revealed At The Game Awards 2022

Hey kids, just in case you didn't know from being bombarded with announcements tonight, The Game Awards 2022 happened.

D&D Beyond announced that they will hold a new special event showcase for the Disability Community of Wizards of the Coast.

The FTC Seeks To Block Microsoft Acquisition Of Activision Blizzard

The Federal Trade Commission (FTC) announced today they are seeking to block the Microsoft acquisition of Activision Blizzard.

DrLupo will be holding his annual Build Against Cancer event starting on December 17th, benefiting St. Jude's again this year.

Mike Flanagan shares his thoughts on The Midnight Club being canceled, saying the show needed "some pretty robust promotion" from Netflix.

Doctor Who showrunner Russell T. Davies teased the 60th-anniversary special titles, a new change of scenery for Ncuti Gatwa, and a lot more.