WWE Raw this week started without the Ric Flair "Woooo" in its intro, reminding us that Vince McMahon might not be such a fool after all, having fired Ric Flair when he did, just weeks before Flair's cancelation. The lack of said "wooo" may have set off Flair's ill-advised attempt at a statement last night. Flair now joins Hulk Hogan on a second, far-less-flattering Mount Rushmore of wrestling: wrestlers who ruined their legacies with their behavior outside the ring and then refused to apologize properly for it. The good news for Flair is that means he can come back to WWE in five years, as long as it's in the context of "helping others learn from his mistakes," which to WWE means selling Hulkster or Nature Boy merchandise.

New WWE Champion Big E opened the show with the reunited New Day. He cut a babyface promo thanking the fans and paying tribute to Brodie Lee, then called out Roman Reigns and the Usos. The Bloodline came out, everyone hung out peacefully through a commercial break, and then the six-man tag got underway. IT was a decent match, Big E got some offense in on Roman Reigns, Bobby Lasley came out to attack both teams and cause a distraction, and Xavier Woods ate the pin from Roman. Lashley speared Reigns and Big E after the match.

Backstage, Lashley channeled his inner Karen and complained to management about losing his title last week. He demanded a rematch. If you were wondering why MVP wasn't there to talk for him, it's because he's getting knee surgery, but in kayfabe, it's because Randy Orton RKOed him.

Eva Marie cut a promo fat-shaming Doudrop and then they had another match. Eva got squashed again. I'm not sure what the point of this is but at least Doudrop has gone over twice.

Big E channeled his inner Karen and complained to management about Bobby Lashley interrupting his match and spearing him.

Paul Heyman channeled his inner Karen on behalf of Roman Reigns' inner Karen and complained to management about Bobby Lashley. Sonya Deville and Adam Pearce made a triple threat match for the main event.

Shayna Baszler and Nia Jax had their grudge match. Baszler choked Jax out. After the match, she brought Jax outside the ring and, despite Jax's pleas for mercy, stomped her arm on the steel stairs, probably setting up an injury angle, maybe making Nia a babyface, and finally restoring some level of badassedness to Shayna. Who are you, and what have you done with the real WWE?

Mustafa Ali and Mansoor faced Humberto Carillo and Angel Garza, who still work here apparently. They pinned Ali quickly with a pretty sick assisted dropkick to the face tag move. I guess they're getting a push then.

Ahead of their tag match, Nikki Ash and Rhea Ripley talked to the crowd about Connor's Cure. I fast-forwarded. They had their match for the Tag Team Championships against Natalya and Tamina and won pretty easily. A title change here was long overdue, though I have no reason to think WWE will do a better job with Nikki and Rhea than they did with Natty and Tamina. We'll see.

WWE Raw Women's Champion Charlotte Flair was the guest on Alexa's Playground. Charlotte ran down Alexa for stealing Bray Wyatt's gimmick and never actually wrestling anymore. Alexa ran down Charlotte for cutting repetitive promos all the time and having no friends. A fight broke out and Charlotte ripped the head off the Charly doll that Alexa retrieved from the trash. When she went for Lily, Alexa stopped her and ended up standing tall. They'll settle this at Extreme Rules, I guess.

Drake Maverick unveiled a plan to the 24/7 jobbers to capture Reggie using a net. Of course they screwed up and caught Drew Gulak instead and Reggie got away by flipping all over things.

Jeff Hardy beat Sheamus in a match, the result of which is that Hardy will be added to the United States Championship match at Extreme Rules, making it a triple threat with Sheamus and Damian Priest.

Speaking of triple threats, Big E, Bobby Lashley, and Roman Reigns fought in the main event of WWE Raw. It followed the usual formula. Big E hit the Big Ending on Reigns to show he could, but Lashley broke up the pin. Lashley hit a spear on Reigns to show he could, but Big E broke up the pin. Reigns broke up a Hurt Lock attempt on Big E. Lashley broke up another Big Ending pin attempt with a steel chair and then beat Big E with it. Lashley then ate a spear and the pin from Reigns. Everyone ended up looking like they could have won, though Reigns, the company's biggest star, ultimately did.

The booking made… too much sense. I'm not sure what's going on in WWE this week, but they seem to finally be taking this a little more seriously. Don't get me wrong: the show still dragged in too many places, the dialogue is often cringeworthy, but it feels slightly less directionless than it has for some time. Perhaps most remarkable, nothing stood out as overtly insulting to my intelligence. That's as positive a review as WWE is going to get out of me at this time, though I'd be willing to revisit if they can continue to build momentum for multiple weeks in a row. 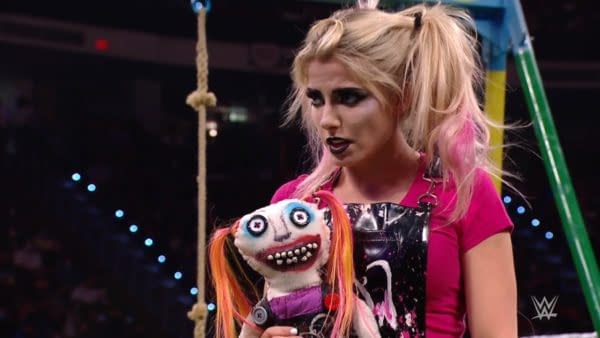 Review by Jude Terror
5.5/10
The booking made... too much sense. I'm not sure what's going on in WWE this week, but they seem to finally be taking this a little more seriously. Don't get me wrong: the show still dragged in too many places, the dialogue is often cringeworthy, but it feels slightly less directionless than it has for some time. Perhaps most remarkable, nothing stood out as overtly insulting to my intelligence. That's as positive a review as WWE is going to get out of me at this time, though I'd be willing to revisit if they can continue to build momentum for multiple weeks in a row.

WWE released a video about the "Build To" the Queen's Crown tournament finals, and the video is three times as long as any Queen's Crown match so far.

After Smackdown lost to Rampage in the ratings, you know WWE was out to punish their fans with a particularly bad episode of Raw.

Here's a look at the Netflix employee walk-out to protest the streamer's handling of Dave Chappelle's special; plus, the text of the letter.

NBC's Saturday Night Live is checking in on host Jason Sudeikis to see how his SNL table read is going, and so far? It's looking all smiles.

Aquaman: King of Atlantis Preview: Did Someone Say, "Trident Battle"?

In the following preview for HBO Max's Aquaman: King of Atlantis "Chapter Two: Primordeus,' it looks like we have ourselves a trident battle.

In this preview for Dark Side of the Ring S03 "Extreme & Obscene: Rob Black’s XPW," New Jack explains a "perk" from working with XPW.