Friday night kicked off the biggest weekend of the year for WWE, as the two-night extravaganza that is WrestleMania gets rolling in Dallas.  But two nights and a possible ten hours of air time just isn't enough apparently with last night's episode of SmackDown on Fox serving as a sort of pre-show for the "Showcase of the Immortals".  Two would-be Mania matches are to be held tonight instead as the rest of the show will surely (hopefully?) be used to hype up this weekend's event.  Enough out of me, let's see what went down on a WrestleMania edition of SmackDown.

The match begins with a nice little video package honoring the namesake WWE Hall of Famer, Andre The Giant, and setting up the Battle Royal.

The ring is filled with stars from Raw, SmackDown, and even NXT (Tommaso Ciampa and NXT Champion Dolph Ziggler).  The very short (only about ten minutes) Battle Royal comes down to United States Champion Finn Balor and Madcap Moss and without much drama, Moss tosses Balor quickly to win this year's match.

After the match, Moss grabs the mic and cheers himself on before telling an insulting joke about the Texan crowd.

Well they certainly got the two advertised main event WrestleMania matches out of the way quickly, eh?

Michael Cole keeps saying on commentary how prestigious the Intercontinental title is throughout this one, which is almost more insulting as to why this match isn't on the actual WrestleMania card.  The match itself is decent enough, albeit incredibly predictable.  The heel tag team dominates the babyface Champion throughout until he turns them against one another and then capitalizes for the win.

And Ricochet does just that, before hitting the 650 on Angel and the Recoil on Humberto for the pinfall to retain.

Next, we get a hype package for the Kevin Owens confrontation with "Stone Cold" Steve Austin tomorrow night at WrestleMania.

A pretty short nothing match here.  Naomi ends it with a Split-Legged Moonsault from the top turnbuckle on Zelina for the pinfall.

Next, we get a hype package for the SmackDown Women's title match of Ronda Rousey vs Charlotte Flair, making the feud look far more interesting than it actually has been.

We then go to a video of Rousey being interviewed in a training ring and it's about as stupid and lacking in charisma as you can expect with Rousey.

.@RondaRousey gets some last minute reps in ahead of her match against @MsCharlotteWWE at #WrestleMania! 💪 #SmackDown pic.twitter.com/26HDrt1yQu

We next get yet another video hype package (sensing a trend here?), this time about the Champion versus Champion match main eventing Sunday night's WrestleMania between WWE Champion Brock Lesnar and Universal Champion Roman Reigns.

Rick Boogs plays Shinsuke Nakamura in now as Pat McAfee dances on the SmackDown announce table, but Austin Theory jumps the crowd barrier and chops McAfee's legs out from under him.

Will somebody get this punk outta here?!?! 😡#WrestleMania #SmackDown @PatMcAfeeShow @austintheory1 pic.twitter.com/56E3ADSmW6

McAfee chases Theory up the ramp and backstage, where Theory runs into Vince McMahon's office.  McAfee kicks the door open and Vince storms out and threatens to fire McAfee and cancel his WrestleMania match, before sending McAfee back out.

The most notable thing here is how impressively strong Boogs is, as he gets ahold of Jimmy Uso and does ten curls with him at one point.

He then Military Presses Uso over his head from his knees up to a standing position.  Really great visuals of what he can do.  Theory then runs out again and takes a fan's soda and throws it in McAfee's face.  But then Finn Balor runs out for… reasons and beats up Theory and tosses him into the ring, where everyone jumps in for a brawl as the bell rings.

But this isn't over, as we come back from a commercial break to find…

A pretty standard and unsurprising six-man tag match here.  Eventually, Theory crotches Balor on the top turnbuckle and then hits him with the ATL for the pinfall.

After the match, McAfee jumps on the apron and looks ready to hit Theory, but Michael Cole talks him out of it.

Next up, Happy Corbin and Madcap Moss are in the ring for Happy Talk, where Moss is patting himself on the back for his Battle Royal win, but Corbin shuts him down and tries to downplay it.  This segment is dreadful and after Corbin makes fun of Drew McIntyre's dead mother, McIntyre storms out and beats them both up and retrieves his sword.  This is how they ended the SmackDown before WrestleMania… with a stupid segment for a midcard match tomorrow.  Brilliant.

And that's that for what was quite frankly an embarrassing episode of SmackDown made even worse by the fact that this was supposed to be the big go-home show for WrestleMania.  Yet instead of appearances and final promos or altercations with the main event stars like Reigns and Lesnar, we just got mostly a clip show that blew its two Mania matches in the opening half-hour and then was mostly just video packages from then on out.  This did literally nothing to build excitement for this weekend's event, the biggest show of the year. 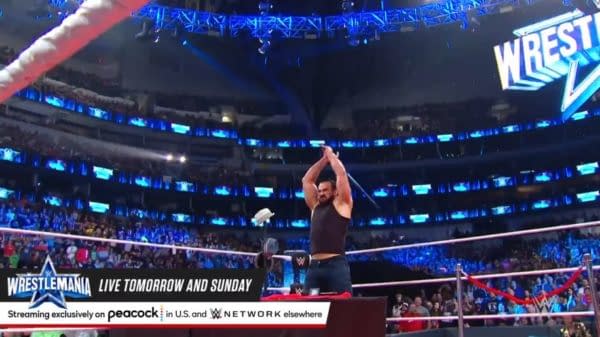 Review by Ryan Fassett
0/10
This was an awful episode of FOX's WWE SmackDown on its own, but for this being the go-home show to WrestleMania of all things, that made it completely unacceptable.

With Taylor Sheridan's Harrison Ford & Helen Mirren-starring 1923 set to return this weekend, here's a preview for S01E05 "Ghost of Zebrina."