For years, the one major advantage Smackdown has had over WWE Raw is the fact that it an hour shorter. WWE barely has enough creative juice to fill a two-hour show. They definitely do not have enough for three hours. But with Smackdown on FS1 this week due to a sports preemption, where they are in far fewer homes and usually get much lower ratings than normal, WWE needed a way to prevent AEW Rampage from potentially beating them in the ratings, so they decided to screw with AEW by extending Smackdown for an extra half-hour, commercial-free. In response, AEW added a half-hour pre-show to Rampage, cutting into a half-hour of Smackdown's 8-10PM Eastern slot, and expanding their head-to-head competition to a full hour. Smackdown will probably still win. If it was Dynamite, it might be another story.

As always, I watched Smackdown the morning after it aired, on 2x speed on YouTube TV DVR. If you haven't, give it a try. It's the second-best way to watch WWE (the best way is to not watch it at all and just read these recaps, but I can't read my own recaps, can I?).

Edge opened Smackdown, cutting a promo on Seth Rollins, who took things too far by invading Edge's home and "pissing all over it." Damn, I must have missed that part of the segment. I thought he just ate his apples and sat in his chair. Edge said Rollins comes close to matching Edge in the ring, but not close enough. Edge said the only way to settle things was in Hell in a Cell… in front of the Saudi Arabian Royal Family… for a shitload of money… at Crown Jewel. That's how I like to settle all my differences as well.

Sami Zayn faced Finn Balor in a King of the Ring semi-final match. Balor won with the Coup de Grace. At 2x speed, it was an action-packed match.

Naomi came out for a match with Sonya Deville, but Deville revealed it would be a handicap match with Deville and Shayna Baszler. Deville wrestled in her pantsuit and Baszler did most of the heavy lifting. Deville won with a foot-on-the-chest pin. This feud would be much better if we had some actual motivation for why Sonya has such an issue with Naomi, but that's too much to ask from this company.

Sasha Banks cut a promo for her Crown Jewel match and about beating Becky Lynch in the main event.

Seth Rollins cut a promo about not being afraid to Edge in Saudi Arabia. He pointed out he's been in Hell in a Cell more than Edge, thus reminding viewers of that terrible Fiend match.

Zelina Vega beat Carmella in a Queen's Crown semi-final. The match was over in two minutes and ended with a rollup when Liv Morgan distracted Carmella, so WWE's Women's Diva-lution continues.

Happy Corbin and Madcap Moss hosted an edition of Happy Talk that was interrupted by Rick Boogs' out-of-tune guitar playing. Boogs and Shinsuke Nakamura danced around the ring and then the Street Profits came out and started dancing with them. What the hell?

As Daniel Bryan vs. Minoru Suzuki took place on AEW's YouTube, the Street Profits challenged The Usos for the Smackdown Tag Team Championships in a Street Fight. It was your typical WWE hardcore affair, mostly sanitized, using kendo sticks, chairs, and tables. The Usos retained.

Becky Lynch cut a promo about her Crown Jewel match and beating Sasha in the main event. Their Crown Jewel opponent, Bianca Belair, joined commentary for the match. Belair distracted Becky and Sasha got the win. There was a time I would have been really amped for this match, but when it's all building to Crown Jewel… who cares?

Adam Pearce and a production crew immediately entered the ring to set up a contract signing. Brock Lesnar and Roman Reigns came out. Heyman told Reigns he put everything Reigns wanted in there. REigns signed it. LEsnar took it and signed it. Reigns called Lesnar a dumbass for signing it without reading it. Lesnar said he did read it earlier in the day… with his advocate, Paul Heyman. Reigns pouted as Lesnar left and Smackdown went out the air.

It's not that Smackdown was particularly bad this week. It just wasn't good. There are some decent angles, like the Heyman loyalty angle, that are interesting enough. There's plenty of talented people on the roster with a ton of charisma. But WWE's matches don't really feel like they have any stakes, and the match formula is so repetitive that even a "good" one doesn't really feel compelling. It seemed like WWE might be trying to step up their game to compete with AEW tonight, but that didn't translate creatively. Overall, WWE Smackdown this week was an average show that felt below average due to slightly elevated expectations. 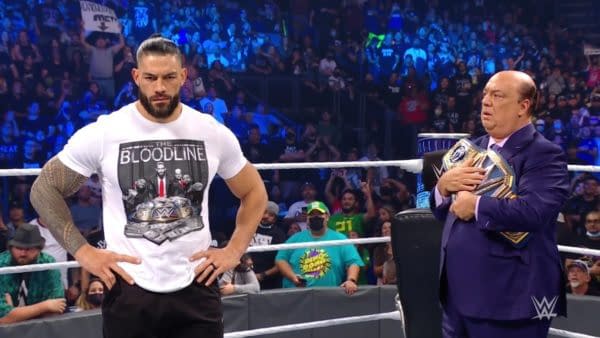 Review by Jude Terror
4.5/10
WE Smackdown this week was an average show that felt below average due to slightly elevated expectations.