Showtime's Yellowjackets has started to explore the depths of their characters a lot more in its' fourth episode, from trauma before the crash to testing relationship boundaries. As usual, if you have yet to watch or still need to do some catching-up, be warned that there will be some major spoilers present moving forward (so don't blame us).

I can't help but have an extreme range of emotions when watching this series. This episode didn't change the way the phrase, "what the fuck?!?", escapes my mouth every so often, but it did direct that energy somewhere. These characters are flawed and sometimes dumb as hell, but they are human and written as such. Yellowjackets does a good job at making sure not to coddle their characters, even when showing them before the crash as teens dealing with all-too-real trauma. I was pleased that we got to learn more about Natalie's (Juliette Lewis) past, her connection with Kevyn (Alex Wyndham), and what happened with her family. The mixtape portion, as adult Natalie handed it to Kevyn, broke my heart a bit. While her character, like others, can be really self-destructive, I began to feel for her more and more in this episode. It was so interesting to see the flip of emotions I had towards some, like how I now can't stand Jackie because turns out she's a privileged inconsiderate asshole. What makes the icing on the cake is the acting on the part of the younger version of these characters, from Sophie Thatcher who plays a young Natalie, and Samantha Hanratty who plays a young Misty.

Let's get some crazy yet fantastic moments out there that I appreciated in this episode of Yellowjackets. First, Misty straight up tripped Ben (like an injured forest creature he'd be the first to be eaten…but we'll have to see if anything like that could happen). Second, don't think I didn't notice the creepy efficiency teen Shauna had when she slit that deer's throat…I can see what job you might have later and it's not making "fun pelt coats" for the others. Third, it was nice finally seeing Taissa's character stick up for whatever morals were hiding underneath all her political career shields. And lastly, it was fantastic to see a series like Yellowjackets, one with a heavy topic, not continually beat down on characters in every scene, but instead allows them to have those moments (finding the cabin, even if creepy and gathering food) that brings a hell of a lot more believability to them than some shows have done. I continue to be impressed by Yellowjackets, waiting for an episode that might disappoint, but in what feels like a holiday miracle of television, that's not yet the case. 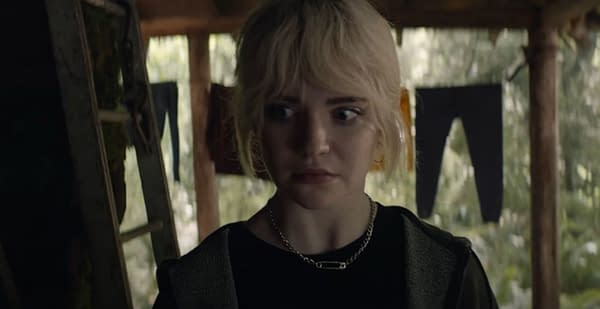 Review by Brittney Bender
10/10
The destruction of trauma and secrets make this episode of Showtime's Yellowjackets just as impactful as the season's entire run so far, bringing this series into the spotlight as a great example of dramatic writing.
Credits
Network
Showtime

With Apple TV+'s Fraggle Rock: Back To The Rock premiering on January 21, the cast & the creative team take viewers behind the scenes.

Hosted by Moment House, Morbid Cinema Macabre was a unique event that proved to podcast audiences that virtual experiences are worth it.

On January 26th, Lt. Joe Kenda returns to Discovery+ for a second round of logic-defying cases with American Detective Season 2.

In this Saturday Night Live promo, Kenan Thompson's pun gets lost on Will Forte; it appears someone's been in Hollywood a little too long.

During a fourth-quarter 2021 earnings call, Netflix co-CEO & CCO Ted Sarandos confirmed that a second season of Squid Game was on the way.

WWE Raw lost the ratings battle to AEW Dynamite this week, and to put it mildly, The Chadster isn't taking it very well. WHY, GOD, WHY?!

Godzilla and the Titans are set to start stomping all over Apple TV+ with the streamer announcing a new Legendary's Monsterverse series.