A Man Among Ye #5 takes all the things you love about derring-do adventurers and pours it into a pirate theme with simple, effective entertainment value. With behavior that would surely be considered boorish had it come in a different package, this repositioning of identity brings up interesting questions in an engaging manner.

Anne Bonny wakes up naked in bed with two professional ladies of the evening, and that sets events in motion. She and her all-female crew of privateers are escorting Lady Jane Castor to something resembling safety after a huge bounty has been issued to bring her home. Ideally, this would mean lying low, but when you're a hard-drinking, womanizing, murder-happy pirate captain who's had to be twice as wild as any other buccaneer on the seas, that's a tall order to fill.

The script by Stephanie Phillips does a fantastic job of making a specific, action-packed protagonist make an impact on this period piece. Like a James Bond, this figure kind of makes waves and a big splash everywhere she goes. Likewise, the artwork from Josh George, John Kalisz, and Troy Peteri makes this time period vibrant and engaging with action scenes and detailed areas of a Caribbean village in 1720.

Identity, however, does come to play. The ship's Black first mate walks around without any questions of her right to do so in a time when freedom of movement for African descendants was hard to acquire. Likewise, if Bonny's actions were performed by a person of the opposite gender, we would all rightly decry the patriarchal negative energies being proliferated. For a woman character to adopt similar behaviors with an all-woman crew, identity requires us to look at this through a more academic lens. These questions, combined with the derring-do adventure, make this book an intriguing choice for fans of tales of high seas historical fiction. RATING: HONORABLE MENTION.

A Man Among Ye #5
By Stephanie Phillips, Josh George
Pirate queen Anne Bonny is back with her crew of lady buccaneers after a harrowing escape from a Caribbean prison! But can they find a safe haven on land or sea after Calico Jack Rackham's betrayal and the governor's promise to hunt down and execute Anne? The second volume of A MAN AMONG YE hits the high seas thanks to writer STEPHANIE PHILLIPS (Harley Quinn) and artist JOSH GEORGE (2000AD Future Shock, Grimm Tales of Terror). 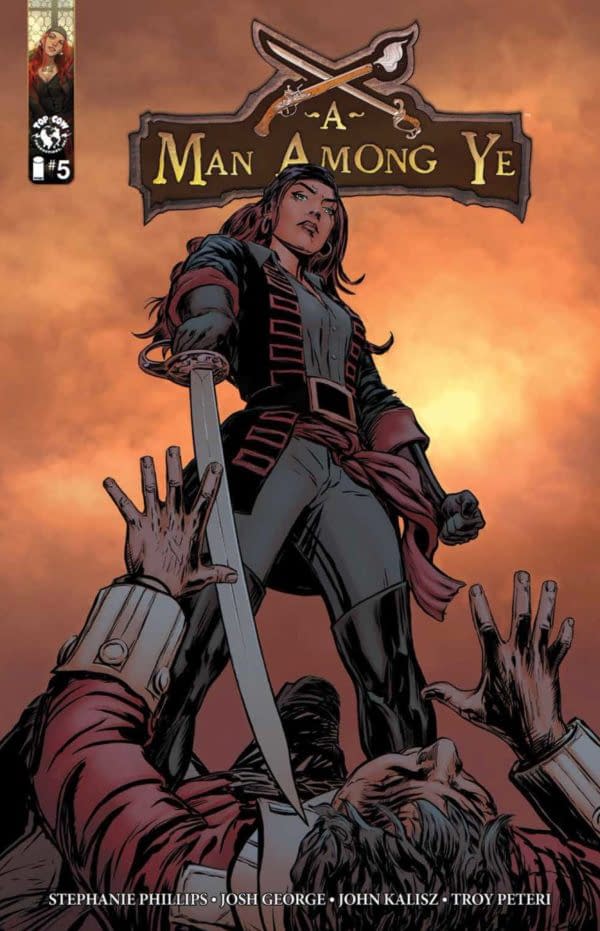 Walking Dead Alternatives in The Daily LITG, 26th of November, 2022

Fox's Fight for Electro in Science Comics, Up for Auction

DC's Grifter Got Run Over by a Reindeer #1 Preview: Save the Bumble

Superman and Wonder Woman save an abominable snowman in this preview of DC's Grifter Got Run Over by a Reindeer #1.

Marvel is still rehashing super-mega-crossver events 1000 years in the future in this preview of Planet Hulk: Worldbreaker #1.

The Florida comic book chain Coliseum Of Comics has acquired the Florida chain of Friendly Local Game Store or FLGS. The combined company will sadly

Superman: Kal-El Returns Special #1 Preview: The Title Says it All

What do you think happens in this preview of Superman: Kal-El Returns Special #1? Kal-El returns, dummies!