Alexandria Ocasio-Cortez, the freshman Congressional representative from New York and preeminent socialist boogeywoman du jour, was accosted by TMZ in the hallways of the capital to get her thoughts on the newly announced comic book from Devil's Due Comics in which she stars, Alexandria Ocasio-Cortez and the Freshman Force.

Alexandria Ocasio-Cortez and the Freshman Force features a creative team including Josh Blaylock, Dean Haspiel, Pat Shand, Shawn DePasquale, Hoyt Silva, Jill Thompson, Tim Seeley, and more. One person not involved in the making of the comic, however, is Ocasio-Cortez herself, and that's something she made clear in her answer.

"I mean, it's certainly an honor that people would put so much of their own time and talent into that all on their own," she said, adding that she appreciated that part of the proceeds would be donated to charity. "I'm especially honored that they're donating the proceeds to RAICES of Texas for immigration and civil rights protections. So I mean, that part of the project, if it can benefit communities that need it, I think it's really amazing."

Asked if it would inspire her to work harder, Ocasio-Cortez said, "It's incredibly humbling and I just try every day to meet up to that bar." But she does hope that the comic can inspire others.

"I'm just a normal person doing her best, you know?" she explained when the TMZ reporter weirdly rambled about how WWE will probably make a character out of her before pivoting back to the superhero thing. "So if I can be that for a little girl somewhere where she can see herself being a superhero, I think that's the thing that's important for all of us. We all have a superhero inside of us."

Alexandria Ocasio-Cortez and the Freshman Force is set to hit comic stores in May.

ALEXANDRIA OCASIO CORTEZ & FRESHMAN FORCE WHO DIS ONE SHOT
MAR191678
(W) Josh Blaylock, Dean Haspiel, Pat Shand, Shawn DePasquale, Various (A) Hoyt Silva, Jill Thompson (A/CA) Tim Seeley
It's Alexandria Ocasio-Cortez and the "Freshmen Force" (of Congress) vs. the establishment in this all-new special! Comic creators converge to celebrate the election of the most diverse group of freshman Representatives in history, and spare no-one in this satire that takes aim at Washington. From the house that brought you Barack the Barbarian! Featuring comics from various artists and bonus activities and games.
In Shops: May 15, 2019
SRP: $5.99 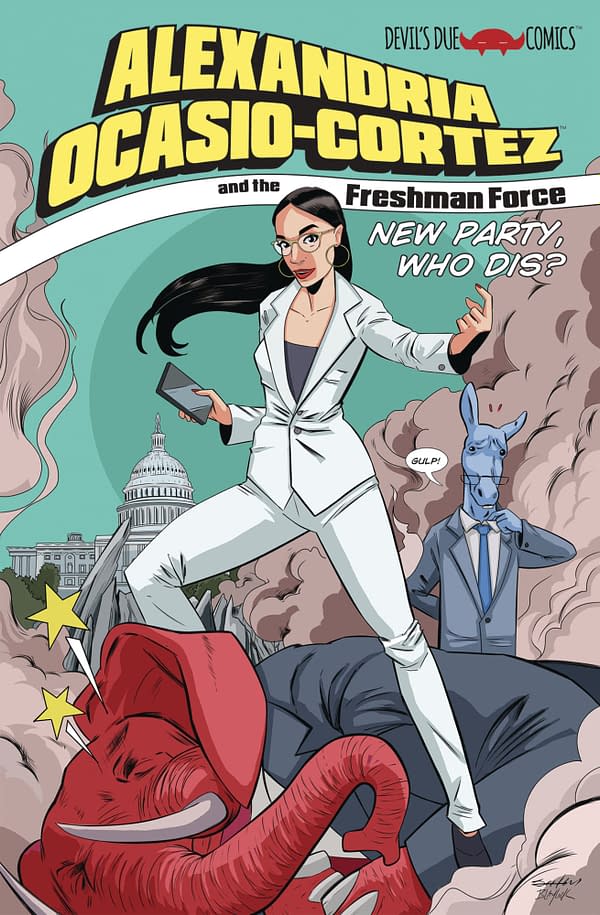 In the quest to locate and ensnare the mythical creature known as the "new comic reader," DC Comics looks to the last group anyone would expect: children.

In deciding from near-limitless possibilities of Batman, The Joker, or Harley Quinn, superstar artist Jock settled on Batman for the Black Label book Batman: One Dark Knight.

Tiffany Haddish is Coming to SummerSlam… To Host the After-Party

Tiffany Haddish will host the SummerSlam After-Party, spreading the joy of wrestling and the delta variant to Las Vegas on August 21st.

It's only been a week, but already the shine is starting to wear off WWE Raw since the return of the fans. And this week, there's no John Cena.

The Flash vs. Psycho Pirate Rematch in Infinite Frontier #3 [Preview]

DC Comics' Infinite Frontier #3 is in comic book stores on Tuesday, with a solicit promising a rematch for the ages: The Flash vs. Psycho Pirate.

In the quest to locate and ensnare the mythical creature known as the "new comic reader," DC Comics looks to the last group anyone would expect: children.

In deciding from near-limitless possibilities of Batman, The Joker, or Harley Quinn, superstar artist Jock settled on Batman for the Black Label book Batman: One Dark Knight.

Titan To Publish Norm Konyu's The Junction In Hardcover in 2022

Titan Comics is to professionally publish the debut graphic novel by Norm Konyu, The Junction, in April next year. A critically acclaimed indie comic from

he Other History Of The DC Universe is a much-delayed retelling of the history of the DC Universe, from the point of view of characters from marginalised

It is possible that Zainab Akhtar's final curated box of newly published small-press comic books ShortBox may be its most popular yet, approaching a

Peach & Plum is a new early graphic novel series written and illustrated by Tim McCanna, about two best friends who rhyme all the time. Rachel Poloski