Originally, Batman Damned #3 by Brian Azzarello and Lee Bermejo was intended to be published in January 2018, four months after Batman Damned #1 in September. Then the news cycle hit and an unforeseen full frontal Bruce Wayne changed DC Comics overnight, as a microscope fell on every panel of every comic. Announced comics such as Second Coming and Safe Sex were jettisoned along with the Vertigo imprint and DC universe books with a T+ age guidance, and micromanagement was the order of the day, with fellow Black Label titles Superman: Year One and Batman: The Last Knight getting new language restrictions.

Batman Damned #2 needed significant redrawing so as to avoid causing more offence, and so it was delayed, but Batman Damned #3 was delayed even more, a total of five times -and five months. It will be finally published by DC Comics tomorrow.

And here's a preview… oh look, it has John Constantine wearing a Robin-style domino mask, and Swamp Thing reunited… and note the Arkham Asylum and Killing Joke touches.

BATMAN DAMNED #3 (OF 3) (RES) (MR)
(W) Brian Azzarello (A/CA) Lee Bermejo
The stunning conclusion to the groundbreaking miniseries by the critically acclaimed team of writer Brian Azzarello and artist Lee Bermejo is here! Batman's most baffling case brings him face to face with his worst nightmare in this highly anticipated finale! In Shops: Jun 26, 2019 SRP: $6.99 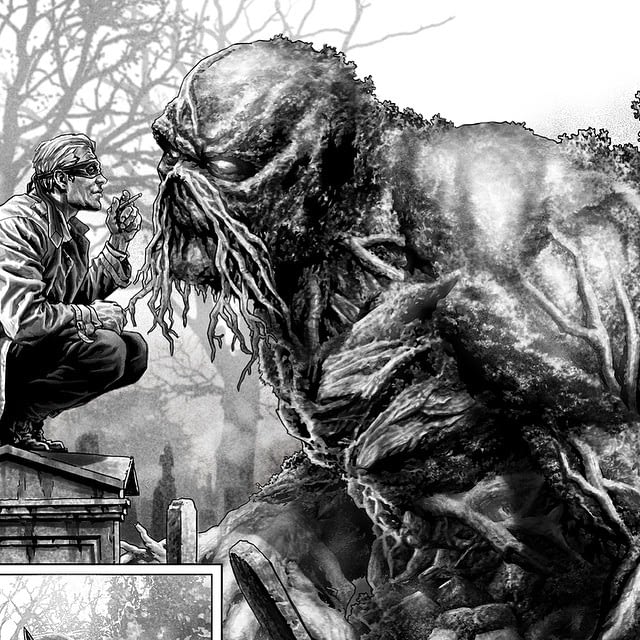