With a clever and self-contained adventure, in Black Cat Annual #1, you get a look into superheroic perspectives from a less-often-shown part of the world and get more of the super-engaging characterization we've come to enjoy from Felicia Hardy, admittedly, if you're tuning in looking for the "Infinite Destinies" storyline where Infinity Stones bond to people on earth and what not … honestly, there's none of that in the main story so you'll have to be satisfied with a very small taste in the backup.

Felicia Hardy and her team (don't worry, you won't really see them) are swinging through South Korea in between heists and get nabbed by the National Intelligence Service's top super-spy, White Fox (imagine Black Widow with a lot more snark … and Korean, but with Silver Sable's hair, or maybe Amanda Waller with more of an action star vibe). Felicia has to choose between being arrested for traveling with falsified credentials or doing a job for the South Korean government that requires some deniability. Bored and whimsical, Felicia takes on the job and some new partners along the way.

As always, Jed MacKay's command of the character is superbly entertaining, presenting the title character as savvy and improvisational like a jazz solo. There's a pretty kooky introduction of the superheroes of Tiger Division, the local premier super-team which gives you a kind of Jack Hawksmoor vibe from Mr. Enigma, a "Roulette meets Doctor Strange" gag from Auntie Ante (does that joke work in Korean?), the previously introduced Luna Snow and more. The only ones you really get a good bead on are Enigma (fun guy) and Auntie Ante, and that's a bit of a deficit. Bringing in a crew this eclectic and visually engaging (thanks to Joey Vasquez, Brian Reber, and Ferran Delgado) and relegating them to being off-panel distractions is a shame.

That said, the respect-hate vibe between Fox and Cat (with a nice nod to recent stories there) was very engaging to read, with both women showing great competence and humor as they proceeded. The Nick Fury backup story was basically a kind of recap, which works because it's the only mention of the arguable through line in this book.

As with almost all of MacKay's scripts, this was certainly enjoyable and had it taken more time with its new friends and less time montage-ing, it could have been a bit better. The sheer entertainment value of Cat and Fox going back and forth, however, is worth having. RATING: BUY.

Black Cat Annual #1
By Jed MacKay, Joey Vasquez, C.F. Villa
'INFINITE DESTINIES' CONTINUES! Felicia Hardy's vacation is interrupted when a layover in South Korea turns into an insane caper. This caper is a deadly journey across Seoul, where she comes face to face with Taegukgi, White Fox and Tiger Division (from TASKMASTER #3)! And what does this have to do with the Infinity Stones? Find out this June! ALSO IN THIS ISSUE: Part 3 (of 8) of 'Infinite Fury'! 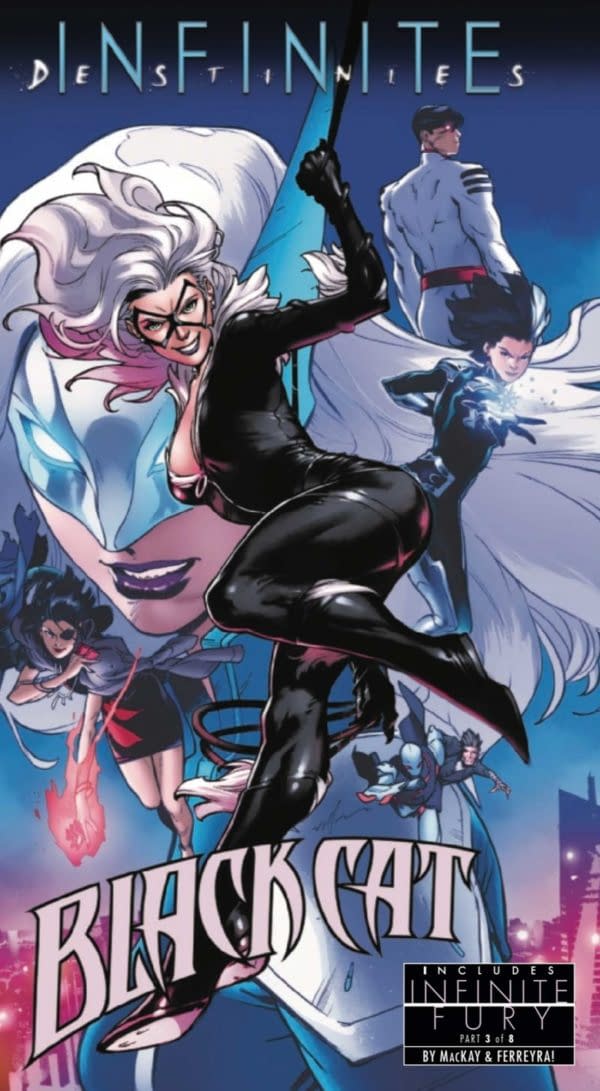 Today -- September 27, 2021 -- is apparently the final order cut off day for the huge new title from Second Sight Publishing and Legends Press Comics,

Jonathan Kent Introduces A Special Friend To His Parents (Spoilers)

A few months ago, Bleeding Cool reported internal editorial and creative discussion at DC Comics that Jonathan Kent, do was going to be defined as a queer

Brian Bendis Doubles Down On The Toilet Habits Of Green Arrow - Will He Be Calling Him The Brown Arrow Soon? (Spoilers)

Marvel Studios Encourages You To Be More Loki This December

Just too late for Christmas, Marvel will be publishing Be More Loki: Alternative Thinking From the God of Mischief, out on the 28th of December. Full of