Wally West has been through the wringer at DC Comics. Deleted from existence as part of the New 52 reboot, reinvented as a new character to tie in with the TV show, his original version brought back in DC Rebirth, though missing his wife and kids, sending him a little doolally, threatening the world so much he was sent to the Sanctuary, where for some reason he ended up killing almost all the residents, and now in prison.

Anyway, at the DC Publishers Panel at San Diego Comic-Con today, DC Comics publisher Dan DiDio answered questions about the character's future. Stating that DC Comics is going to put Wally through the wringer, again, in the upcoming series Wally West: Flash Forward, and that this mini-series by Scott Lobdell. Brett Booth and Norm Rapmund will kick off a major event in 2020 for DC Comics.

FLASH FORWARD #1
written by SCOTT LOBDELL
art by BRETT BOOTH and NORM RAPMUND
cover by EVAN "DOC" SHANER
variant cover by INHYUK LEE
His name is Wally West—and he was the Fastest Man Alive. That is, until the Multiverse was rewritten without him or his family in it. Wally returned and tried to make it work, but the damage was done. Spinning out of the events of HEROES IN CRISIS, follow the man who called himself Flash on an adventure to find redemption in a cosmos that has fought so hard to destroy him.
ON SALE 09.18.19 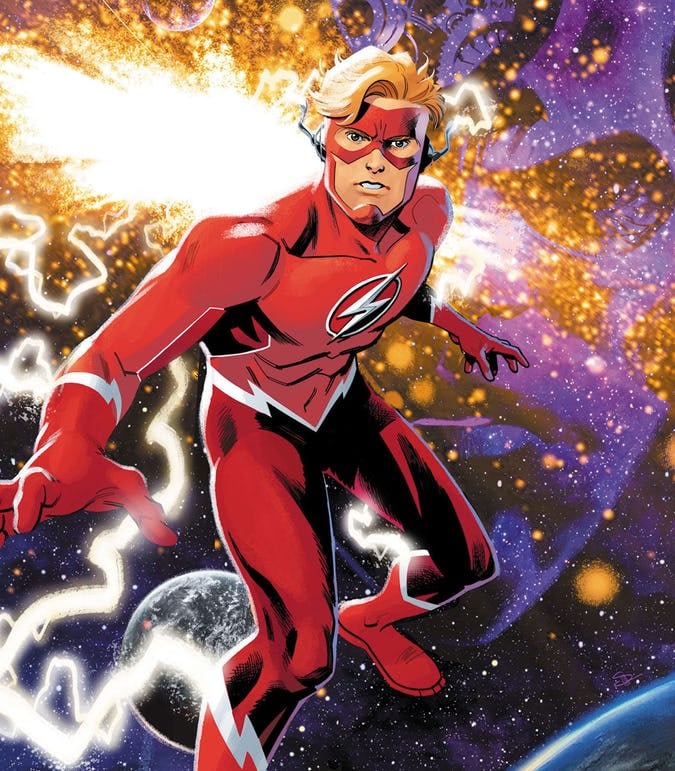 Monster Fun Back To School In Rebellion 2000AD August 2022 Solicits

The Superheroic Horror of Shield-Wizard Comics #11, Up for Auction

Jughead gets a job funneling cheap high school labor to a local advertising agency in this preview of Archie Giant Comics Splendor.

Damian Wayne finds his calling in this preview of DC vs. Vampires: Hunters #1. And yes, it's vampire murder.

Preview Gender Queer: A Memoir deluxe edition hardcover, coming from Oni Press in June, ahead of FOC on Monday.

Robin #14 Preview: Deathstroke and Talia Al Ghul to the Death?

Deathstroke has finally caught up with Talia Ghul, and he's really holding a grudge in this preview of Robin #14. So is she.

PReview Jonna and the Unpossible Monsters #10, by Chris Samnee, Laura Samnee, and Matthew Wilson, ahead of Monday's final order cutoff.