Back in September, Bleeding Cool got the rumour that many more WildStorm characters would be returning to the DC Universe. The line of comics created and published by Jim Lee were bought out by DC Comics a couple of decades ago, and with Jim Lee now sole DC Publisher, it has seemed a fine time to bring them back.

And last month, they dropped a whole lot of names into a DC/Wildstorm word salad on the page. In today's Batman: Urban Legends #3, they pick a few of them up.

As Grifter gets to work with his direct superior, Chance Adibi (with orders it seems from his boss's boss Lucius…)

What is this, a James Bond movie? Probablly. Anyway, in a tender moment with Chance, he shuts down about himself, giving only a little away.

A lifetime ago and a universe away – is this clever meta commentary, or is this a recognition that Grifter may be from somewhere else in the DC Omniverse? In previous Batman comics, Batman/Bruce Wayne had dropped some knowledge. Of Halo… 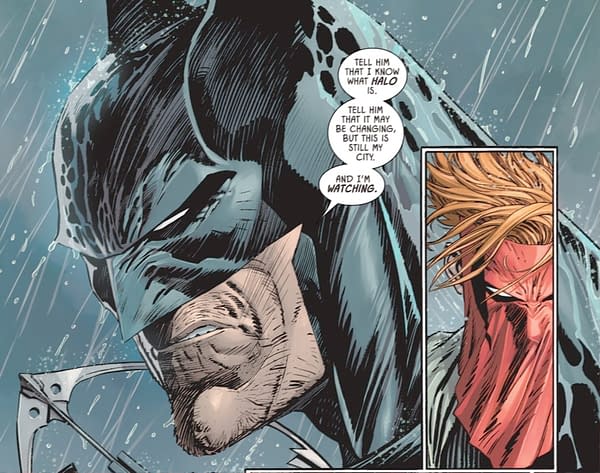 In the WildStorm comic books, the Halo Corporation was founded by Jacob Marlowe and used to finance the WildCATS team. With the help of Void, Marlowe created the company and made himself a multi-billionaire, to find, train and fund his fellow Kherabim descendants in battle with the Daemonites.

There is John Lynch, former agent of I.O. and Team 7 who also first appeared in WildCATS #1 and then acted as a mentor to Gen 13, also from WildStorm. 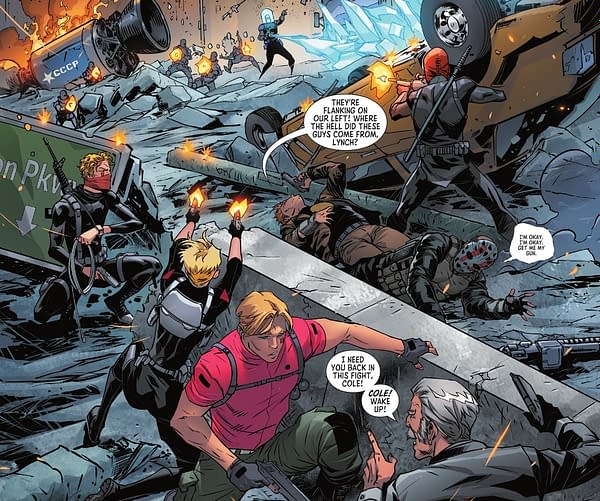 There is also mention of Deathblow, who first appeared in Darker Image #1. A black-ops soldier and mercenary with powers of psychokinesis and regeneration, he was a member of WildStorm teams Gen 12, International Operations, StormWatch, Team 6, Team 7 and Team LaSport.

There is also Marc Slayton, better known as Backlash, and Holden Carver, better known as Sleeper. And there is mention of Team 6, the black-ops team that preceded Team 7 from the seventies. And this namedropping does signify more from that side of the WildStorm Universe to come. Less Authority, more Brubaker…

Well in today's Batman: Urban Legends #3, Bruce Wayne would like Grifter to know he knows all about John Lynch.

Even if Grifter pretends otherwise.

And at least he cops to Jacob Marlowe on the streets. But as to other Wildstorm characters in DC Comics titles today? Grunge appears on the Jim Lee cover of the DC Festival Of Heroes: The Asian Superhero Celebration #1 out today. But that's all. Nothing on the inside…

DC FESTIVAL OF HEROES THE ASIAN SUPERHERO CELEBRATION #1 (ONE SHOT) CVR A JIM LEE
(W) Various (A) Various (CA) Jim Lee
Grab your favorite boba and pull a chair up to the dim sum table as we celebrate Asian Heritage Month with all your favorite Asian DC characters, old and new! Join Cassandra Cain, Katana, Green Lantern Tai Pham, the Atom, Dana Tan (a.k.a. Batman Beyond), Red Arrow, Lady Shiva, Damian Wayne and the al Ghul clan, New Super-Man, and more as we present new tales of these characters from their thrilling history! Plus, Cheshire Cat's relationship to Cheshire is revealed as Shoes asks Selina Kyle to take her under her wing as Cat Girl. And that's just the start! Retail: $9.99

BATMAN URBAN LEGENDS #3 CVR A JOHN ROMITA JR & KLAUS JANSON
written by CHIP ZDARSKY, MATTHEW ROSENBERG, BRANDON THOMAS, and more art by EDDY BARROWS, RYAN BENJAMIN, MAX DUNBAR, and more The mystery around Cole Cash and HALO deepens as Batman takes a more active role investigating the man known as Grifter. But other villains in Gotham have begun to notice what Grifter is up to, and they're about to attempt an assassination! How long can the unlikely team-up between this Dynamic Duo last? The Outsiders epic reaches its end with the return of three iconic Outsiders: Black Lightning, Katana, and Metamorpho, all reunited to face down Katana's mother-in-law! This finale will change the makeup of the Outsiders forever and set them on a new trajectory in the DC Universe! Red Hood and Batman fight over what they should do with the child who is now orphaned as a result of Red Hood's temper. While they place the child temporarily under the care of Leslie Thompkins, she debates if she's doing the right thing. Is she just looking after another Robin in training?
Retail: $7.99

I bought my copies from Piranha Comics in Kingston-Upon-Thames. Piranha Comics is a small south London comic store chain with a small south-east store in Kingston-Upon Thames's market centre, and a larger south-west store in Bromley, with an extensive back issue collection and online store. With a new store planned for Watford, if you are in the neighbourhood, check them out.

Learn the secret history of the alien race known as The Fraction in this preview of Flash: One-Minute War Special #1.

Legion of X #10 Preview: Can Juggernaut Overcome His Impotence?

Vox Ignis helps Juggernaut overcome his impotence by offering to ride him in this preview of Legion of X #10.

In this preview of DC's Harley Quinn Romances #1, Harley Quinn creates an alternate universe where DC Comics is a high school and The Joker is a football star.