Last week we warned you that Boom Studios' Hellmouth #1, kicking off the first-ever Angel and Buffy event, comic, has a foil cover that might prove difficult to get at the level that the resurgent collector and speculator community would prefer, leading to high demand.

Well, Hellmouth #1 FOC'd yesterday and I'm hearing that maybe more retailers and collectors read this site than might admit, given that the cover had a 300% jump in orders, going from initial orders of under 1000 units to now nearly 3000 units. We can't know for sure what that will mean for the notorious damages to these foil covers, which can sell as high as $90 in the case of Mighty Morphin Power Rangers

That part of a strong 27,000 orders at FOC for this big Buffy event – an increase of over 50% from the recent Buffy #8 (which clocked in just over 18k at FOC). But will that be enough for retailers or are we headed for a quick sellout, as I predicted weeks ago?

At first glance, one might think it's enough, but let's just look at Boom for a moment and their recent history with comic book events… Shattered Grid, the first ever Power Rangers comic book crossover, launched in 2018 with Mighty Morphin Powers Rangers #25 which sold 39,495 versus Mighty Morphin Power Rangers #24 at 12,493 – an increase of 216%. And of course famously sold 800 copies in 15 minutes in one store.

We also saw Necessary Evil launch this year in Mighty Morphin Powers Rangers #40, which saw a 170% increase from issue #39, with 13,060 units sold versus 35,186 units respectively.

Whoever writes Buffy next. https://t.co/Yg6IKbxspx

See, Donny, we can work you into any article – consider that our belated birthday gift. Both series feature frenemy leads (Spidey/Venom, Buffy/Angel), reinterpretations of classic villains (Carnage, Drusilla) and some of the most devoted fandoms around.

We just saw Absolute Carnage #1 move over a quarter of a million units in August, versus the Venom #17 at around 80,000, over a 300% increase from core series to event book…and it still sold out multiple times. Could this be the new customer – speculator or otherwise – ordering pattern for big event books?

If it is, well then we told you first yet again – and perhaps Boom's Filip Sablik will have to offer another explanation for why the company didn't double the FOC orders to meet the unexpected demand from consumers for another hit series in the vein  of Once & Future and Something is Killing The Children.

Hellmouth #1 is in comic shops October 9th while the foil cover is on-sale October 30th. 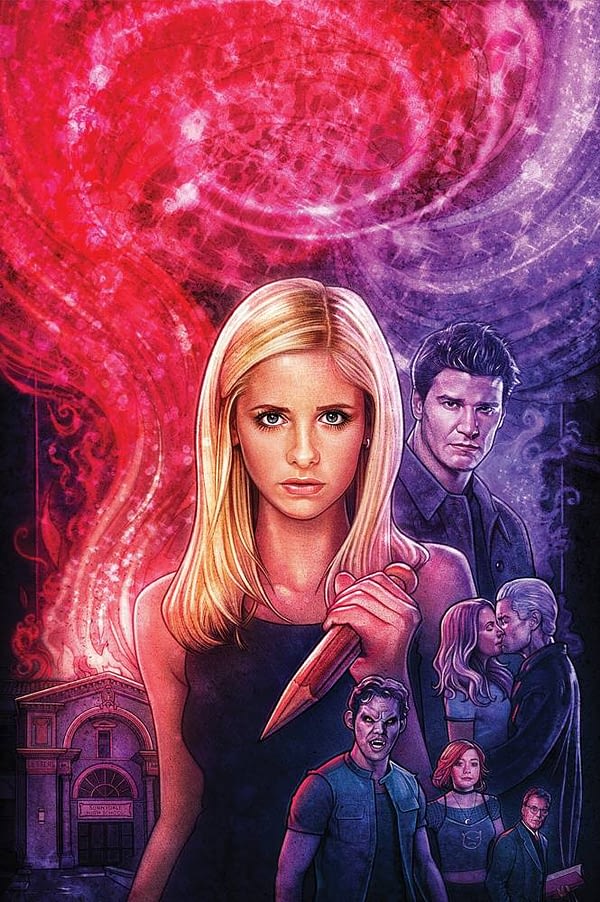