Yesterday saw the publication of Nightwing #70, the first part of the Road To The Joker War, with copies actually selling on eBay for up to $20, despite having a $3.99 cover price. And while today's Batman #91 has a better-looking Joker…

Nightwing #70 may have a more devious one. We know that the Joker knows that Dick Grayson – Richard Grayson – Ric Grayson – is, or was, Nightwing. And Robin. 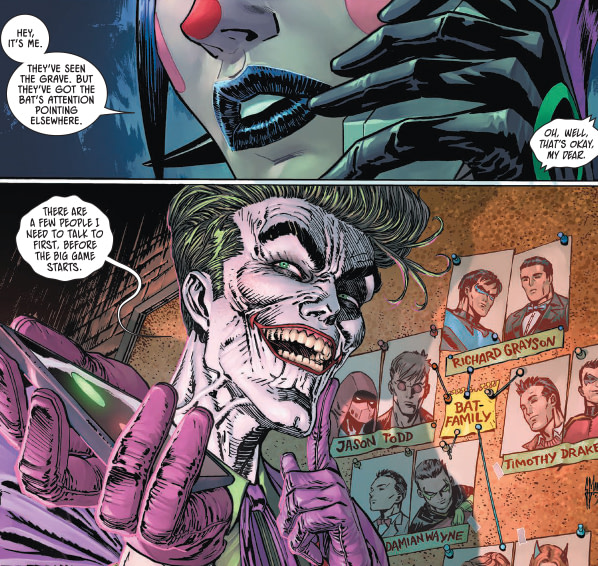 But in currently comics, Dick Grayson doesn't remember being Nightwing. Not properly. He doesn't even feel like Diuck Grayson, going  by Ric Grayson or Richard Grayson these days. And it's all down to a certain memory crystal and the manipulations of the Court Of Owls.

Maybe someone with a vested interest in manipulating Ric Grayson to remember being Nightwing again, properly, may be in order?

I mean, what fun is revenge if the subject doesn't know why the revenge is happening?

NIGHTWING #70
(W) Dan Jurgens (A) Ryan Benjamin (CA) Mike Perkins
How many Nightwings does it take for one Joker to strike to get to the real one? Four Nightwings. And that's not even the punchline-how will Ric interact with the Joker when he's not quite sure which one of his two memories is the real one…and exactly how dangerous this clown standing before him is?In Shops: Mar 18, 2020 SRP: $3.99

Nightwing #70 is out today from DC Comics… I bought mine at cover price off the shelf from the still-very-open Piranha Comics in Kingston-Upon-Thames. Piranha Comics is a small south London comic store chain with a small south-east store in Kingston-Upon Thames's market centre, which runs Magic The Gathering nights on Fridays, and a larger south-west store in Bromley, which also runs Magic nights and has an extensive back issue collection and online store. If you are in the neighbourhood, check them out.