C2E2 kicked off today, and Bleeding Cool ace reporter David Pierce was on hand at an X-Men writer signing event at the show. Naturally, we instructed Pierce to find out the answers to the questions Bleeding Cool readers really want to know, and what question could be more important when it comes to X-Men comics than the status of Wolverine's endowment?

As longtime readers know, Bleeding Cool has been investigating the theory that Wolverine has two dicks… one for f**king, and one for making love. More specifically, he uses the dicks for f**king Cyclops and making love to Marvel Girl. 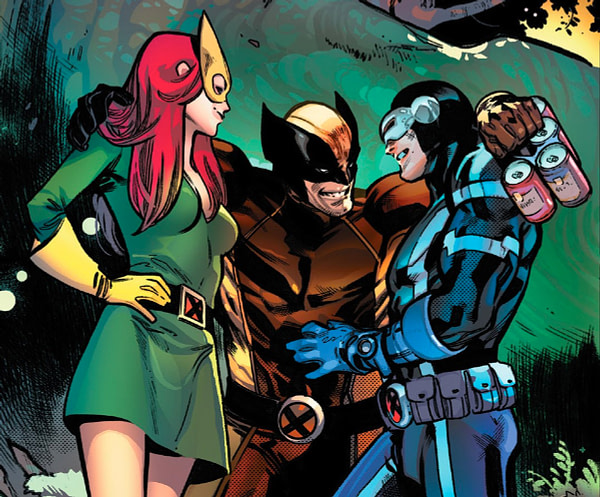 We recently laid out all the evidence collected so far and even the most ardent Wolverine two-dick deniers will have to admit our case is pretty strong. So when Pierce approached X-Men writer Jonathan Hickman, of course he asked him point blank exactly how many dicks Wolverine has.

Unfortunately, Hickman refused to answer, possibly because he is planning to reveal both of Wolverine's two-dicks in an upcoming "red issue" of X-Men. Could we hear more about them at the X-Men panel later? Hickman did refer Pierce, however, to Wolverine and X-Force writer Benjamin Percy, who was more willing to discuss the subject even if he avoided giving a concrete answer.

Percy at first told Pierce "no comment" when asked about the dicks, more than confirming our suspicions. However, Percy quickly tried to walk back his answer and obfuscate, saying that Wolverine was "a walking dick" and then calling him "just a dick with two legs."

Some might say that Hickman and Percy avoided the question, but their refusal to go on the record about the number of Wolverine's dicks speaks volumes. If Wolverine has just one dick, then why not say so? Certainly, having one dick is not a controversial position. But since neither writer would give a straight answer on the subject, we have to assume that Wolverine has a number of dicks other than one, and when all the other evidence is taken into account, it's looking more and more likely that the exact number of dicks Wolverine has is two.

We'll continue to try to get to the bottom of this important mystery as C2E2 continues throughout the weekend. Thanks to David Pierce for being one of comics' last true journalists willing to ask the difficult questions.

Why won't Bat-people take The Penguin seriously in this preview of Detective Comics #1038, in stores Tuesday from DC Comics?

Logan Does What He Does Best in Wolverine #13 [Preview]

In this preview of Wolverine #13, Logan finally gets an assignment he's perfectly suited for: bathroom attendent at the Hellfire Gala party.

Gamma Flight are, at least obstensibly, on the run in this preview of Gamma Flight #1, in stores on Wednesday from Marvel comics.

The trial of Naomi commences with a pity party in this preview of Justice League #63 by "The Great One" Brian Bendis and David Marquez.

Superman struggles to explain himself after not keeping in touch with his fan club for a long time in this preview of Action Comics #1032.

Helping Reptil with his Daddy Issues in Reptil #2 [Preview]

If you can't trust a mysterious new villain and his army of rock golems, who can you trust? Check out this preview of Reptil #2, in stores Wednesday,

First Look at Jackson Hyde as Aquaman: The Becoming, from DC Comics

Aquaman: The Becoming is the new series published by DC Comics in September that will see Jackson Hyde, known as Aqualad, become the new Aquaman of the DC

Why won't Bat-people take The Penguin seriously in this preview of Detective Comics #1038, in stores Tuesday from DC Comics?

Bleeding Cool gets the word that British publisher Jonathan Cape has let go of their head of book design, Neil Bradford. Bradford had worked at the

Logan Does What He Does Best in Wolverine #13 [Preview]

In this preview of Wolverine #13, Logan finally gets an assignment he's perfectly suited for: bathroom attendent at the Hellfire Gala party.

Gamma Flight are, at least obstensibly, on the run in this preview of Gamma Flight #1, in stores on Wednesday from Marvel comics.