With a gigantic exposition dump and the beginnings of a sense of framing, Mister Miracle #4: The Source Of Freedom starts to connect the dots like Charlie's paranoia board from It's Always Sunny In Philadelphia morphing into the smooth digital displays in front of Tom Cruise in Minority Report. This great clarity does not come without costs, but it is making this series look like it will stand much stronger in a single, uninterrupted edition.

Shilo Norman has discovered Oberon, the perpetual accessories to Misters Miracle, since his 1971 Jack Kirby-penned debut. Oberon, as noted, makes a note of a wider multiverse of experiences (providing the grounding for antagonist N'vir Free and establishing the connection to "Earth-Zero" and the DC universe at large). Likewise, Oberon provides a gigantic dump of exposition by way of a newsreel-styled memoir from Thaddeus Brown, the first Mister Miracle. In this flashback-heavy sequence, we get the thematic core of the series, which stands up very well and helps the series title connect in an unexpected and refreshing way.

Brandon Easton's script is fearless in its ability to confront the hardest elements of the Black experience in the United States as a stimulus for the concept of escape. This metaphor, manifested in both Brown and Norman, gets real personal stakes here. All of that is very engaging. There is also a curious loose thread of a mystery that Norman may solve or provide the impetus for later stories.

Pico Ossio, Rico Renzi, and Rob Leigh more than ably take on the challenge of depicting the period-based settings of Thaddeus Brown's tale of woe, including action and wonderfully historically accurate looks at several frustrating points of American history. Also, at any age, they depict what might be some of the most majestic facial hair ever seen, which is no mean feat.

The periodical format may, in fact, be the true villain here (as the threat of the aggressive N'Vir free is mentioned but not seen in these pages), as the interruptions for monthly breaks in the narrative impose an unfair structural limitation here. This does set up a big conclusion and denouement but doesn't close any loops in its own pages. Likewise, there's a very influential element that alters the course of the narrative but literally gets parts of a page before disappearing from the story forever.

Not to throw the baby out with the bathwater, this series remains intriguing and has tons of interesting points … but the show's not over, so there's no telling if it's working or not at this point. RATING: HONORABLE MENTION.

Mister Miracle #4: The Source Of Freedom
By Brandon Easton, Pico Ossio
Shilo Norman is Mister Miracle no more! Left at his lowest point, Shilo's fame status and name are violently ripped away. The legacy of the Miracle mantle is shrouded in dark secrets, and now, Shilo wants answers. Brought before a mysterious figure, Shilo learns tragic truths about his past, present, and possible future. But can Shilo handle these truths and regain his powers before itâs too late to stop N'Vir's plans?

Mister Miracle #4: The Source Of Freedom 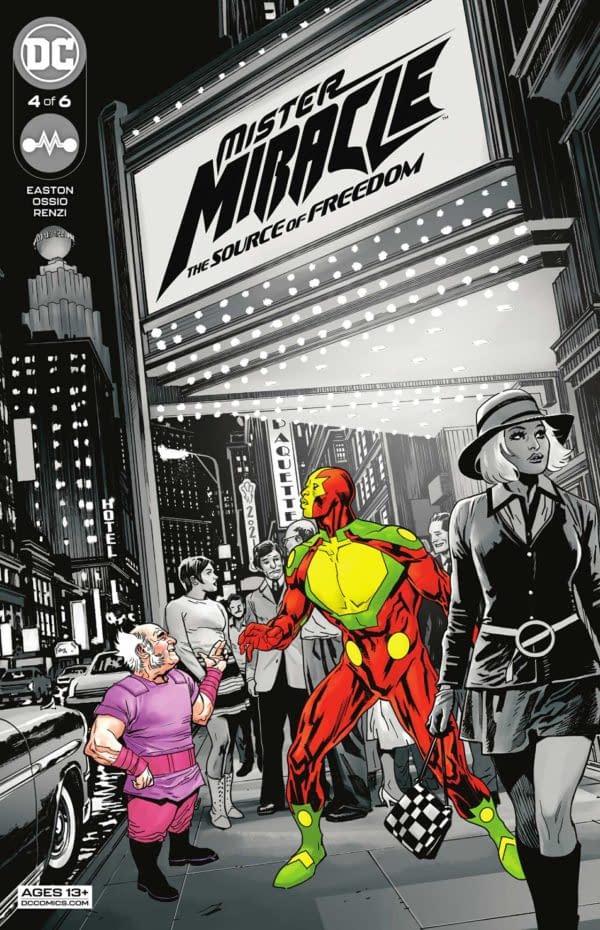 Review by Hannibal Tabu
7.5/10
A source for answers finally finds a set of answers, clearing up concerns from previous issues but only teeing up the shot, not hitting it.
Credits
Editor
Diego Lopez

One of the most common criticisms of the superhero genre is how little they do to actually change the lives of the people they protect. Icon & Rocket

When approaching horror material, one of the signifying marks of a high-quality effort is the revulsion and dread one feels upon considering the very

Good Asian #5 Review: The Struggle To Be Accepted

The struggle to be accepted by American society is one many marginalized communities have wrestled with throughout the country's history. In The Good

A breakneck plot and an intimate, elegant framing device give you a lot to like in Winter Guard #2, but everything’s not what it needs to be in Mother

David Walliams, of Little Britain, Rock Profile, Britain's Got Talent, and Mash & Peas, is also one of Britain's biggest-selling kids authors. And has

Bewitched And Bewildered, The Daily LITG, 19th of October 2021

Last year, DC Comics made a lot of long-standing employees redundant, including the much loved Fletcher Chu-Fong, Executive Events Director who had been